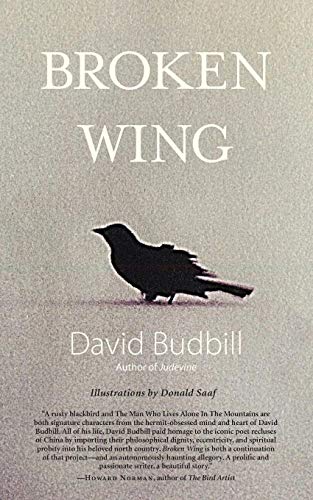 “You need not be a bird lover or watcher to enjoy this book, but there’s a good chance you will love both birds and life more by its end.”

“Evening: when the day’s birds are gone and the night’s wanderers wait listening, when dark falls softly as a bird’s wing; then beyond the meadow in the bull spruce, a barred owl, this secretive bird of the deep woods, this bird The Man Who Lives Alone in the Mountains has listened to every summer for so long . . . the barred owl, another one alone, the barred owl, alone, alone, alone, begins his dark melody to the moon.” This sparse yet beautiful prose of David Budbill’s Broken Wing novel opens us to a landscape where outer and inner join.

Knowing that the author suddenly died this past September, 2016, after 76 years, adds a certain resonance to the music of this allegorical tale of man—bird—mountain—aloneness—caring. David Budbill, American poet, playwright, fiction writer, jazz flautist, editor, reviewer, and NPR commentator served the world with a keen eye to nature, animal, mineral, and human. His basic stance, though relaxed, was one of Buddhist acceptance and balance as he proved in his nine books of poetry, most for Copper Canyon Press. His last book Tumbling Toward the End is yet to be released in February, 2017.

Broken Wing, which appeals to both young and adult readers, is set in his remote Vermont woodlands where our main figure, The Man Who Lives Alone in the Mountains, has settled into a hermitage of sorts after a life of playing jazz in the city. The third person narration is thinly disguised as the man himself, and we hear his voice most clearly when he writes to his longtime friend, Howard, reflecting on his own character:

“What I’m talking about is why I’m so attached to Broken Wing, my rusty blackbird friend. As my bird book says: a secretive and solitary bird—they seldom occur in very large flocks, and do not, as a rule, associate with red-winged blackbirds or grackles. We are two of a kind, he and I. Both of us cast adrift on this white and foreign sea. . . . He and I are loners, and yet we’re both also more than that.”

With Thoreau-like precision David Budbill captures the details of the natural world: “And when the morning came, the cold and gray, the dank and chill of November had begun. Rapidly now, the last bit of color, the remaining pale yellows, drained away from the hillsides. Now the skeleton of the world revealed itself; the sere gray and brown of naked hardwood trees stretched their skinny fingers against the sky.” Though Budbill closes off this tale of devotion and will with a labyrinthine suggestion worthy of Jorge Luis Borges, we know that only a poet could write with such lyric precision. The simple, primitive illustrations of Vermont artist Donald Saaf  provide charm and fitting character to the work.

The final chapter in Budbill’s own voice reflects on life and death and grief and survival echoing our own sense of our authors last words. “What if there is something—a land, say, a place beyond the conundrum, the mystery, to which we can go only when we accept the mystery and its confusions for what they are, and do not try to solve them: Perhaps, in that acceptance, we can gain a passport, so to speak, to that place beyond, that place The Man’s friend William calls the Tone World…which, I believe, is where all stories come from.”

This is a fine capping work to a lifetime of writing that asked the brave questions and accepted life’s deep mystery. You need not be a bird lover or watcher to enjoy this book, but there’s a good chance you will love both birds and life more by its end.