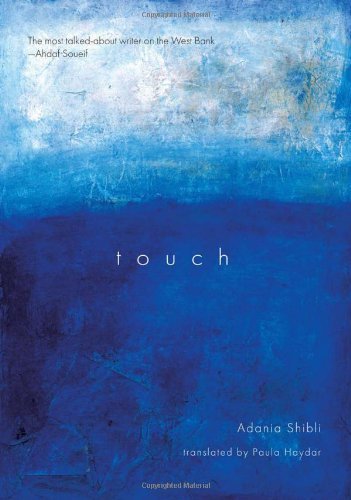 There is much richness and beauty contained in this very short book. Shibli has an exquisite grasp of language that allows her to say a vast amount without writing much at all. Her words are precise and telling. Touch is so well crafted that the reader feels like part of the narrative, present and active in the world the author describes. She is a great talent. Adania Shibli is Palestinian born and has already won praise for her essays, short stories, and plays. She has twice won the A. M. Qattan Foundation’s Young Writer Award prize for literature, and was chosen as one of the Hay Festival’s Beirut 39. Touch is Shibli’s debut U.S. novel. The story revolves around the everyday life of a young girl in Palestine. We are privy to the tragedy and beauty of living and growing up in a part of the world that we in the West know very little about. Every little thing appears to have equal significance in the context of this girl’s life. The death of a family member is as potent and mystifying as the golden flakes of rust on a water tower. Touch describes this world of the youngest daughter of nine, hers perhaps the most marginalized position of all. Yet her world is a thing of beauty and magic. That is not to say that everything that happens is good—the little girl has to deal with heartache and loss. However, despite her setbacks and trials, she seems to face her life with a strength and forbearance beyond her years. With her excellent use of language and her rich palette of images and emotional responses, Shibli has emerged as a strong new voice in Arabic literature. Her writing is nonjudgmental; she gives the reader the facts and lets them make their own judgments. Her perspective is that of the reporter, minus the sensationalism. One is left wondering how much we really know about the variety of cultures around the world. In the western media we are told a lot about the Middle East being violent, conservative, unpredictable, and unreasonable. Touch goes a small way toward lifting the veil on a part of the world that, throughout history, has been rich in cultural and social advances. The little girl and her family are just people, like us. In Touch, Shibli has created a wonderful exposition of daily Palestinian life. It is a small, isolated life far away from politics, war, and Arab-Israeli conflict. Yet this is a real life, the life of a little girl. The way Shibli tells it, it could be anyone’s life. Yes, we all live a little differently in different parts of the world, but this work reminds us that there is more that makes us the same than there is that makes us different. In this sense Touch is a triumph. Reviewer Phil Constable is a technical writer, document designer, and editor who has written on such authors as John Fowles, Graham Swift, William Golding, Graham Greene, and Kazuo Ishiguro.