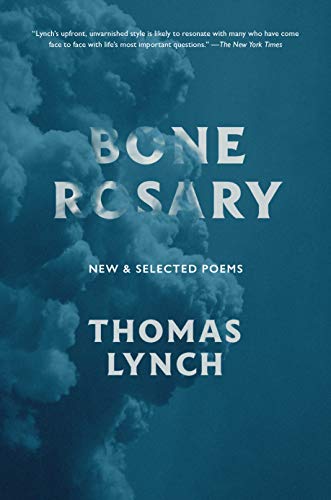 The challenge in reviewing a book of new and selected poems by a writer of Thomas Lynch’s caliber is that one might feel unequal to the task. Lynch is the author of five collections of poems and four books of essays, as well as a book of stories, Apparition & Late Fictions. His first collection, Skating with Heather Grace, has been designated a “Classic Contemporary” and reissued by Carnegie Mellon Press. He’s been the subject of two film documentaries, and his essays, poems and stories have appeared in The Atlantic, Granta, The New York Times, The New Yorker, Poetry, The Paris Review, and elsewhere.

The poems collected in Bone Rosary move fluidly from poems about parenthood and marriage in his first collection, Skating with Heather Grace, to poems about everything from sin-eaters, flora, faith, doubt, and death, in his later collections.

First published in 1997, Skating with Heather Grace was edited by the celebrated editor, Gordon Lish, who at the time of its publication wrote this concise introduction to Thomas Lynch, the poet:

“Heather Grace is Thomas Lynch’s daughter. Thomas Lynch is the father of four children. He is an undertaker. He gets his living as an undertaker in the small midwestern town of Milford, Michigan. He does his work and he comes hone to look after his four children. If Thomas Lynch did not look after his four children, then they would not be looked after. Like the poets Wallace Stevens and William Carlos Williams, before him, Thomas Lynch works in the world of real things. Like Stevens, like Williams, Lynch does the kind of work that makes him look at death —week in, week out, year in, year out. Fur fourteen years, Thomas Lynch has been looking at death and then coming home to give life to Heather Grace and others.”

Since the publication of his first collection, Lynch has often been compared to Jack Gilbert, another poet known for shamelessly romantic poems that somehow never succumb to sentimentalism. Like Gilbert, Lynch’s poems are bathed in music, battered by grief, buttressed by humor. How it’s possible to achieve such a delicate balance is anyone’s guess. Therein lies Lynch’s magic.

He keeps trying to replicate that day

In late September on the Pere Marquette

When the salmon were running. How they bet

Of the biggest and the best. He was nine.

His mother and father were not divorced.

The salmon went upstream to spawn and die.

There seemed to be an order to the universe.

He has a picture of himself that day,

Behind him trees are turning. It is autumn.

His mother's back home with Mike and Sean

And Heather, his sister, and all the while

This poem, from Lynch’s second collection, Grimalkin and Other Poems, is one of many that manages to achieve a moving interface between the taut opposing forces of sex and death, love and grief, the present versus the past.

The same high praise applies to a majority of the poems in this collection, which perform a high-wire balancing act between narrative and lyric poetry, form and free verse, sentimentality and purgation, humor and high art.

It is rare to encounter a poet so surefooted. Bone Rosary is a selection of the very best poems from one of America’s most thought-provoking writers. As Billy Collins says, Lynch’s poems take us “to where consciousness is alive and shimmering with joy and loss, blindness and epiphany.”