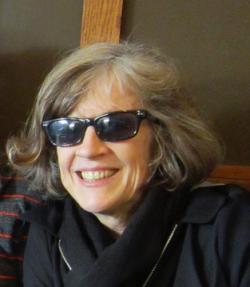 Ms. Hicks has performed on CBC national radio; one of her plays "Singing the Bones" was adapted to film and screened internationally to critical acclaim. Her monologues are featured in Smith & Kraus’ series Best Women’s Stage Monologues (New York), and She Writes (Playwrights Canada Press). Her writing has been published in The Los Angeles Times, San Francisco Chronicle, Milwaukee Journal Sentinel, Vancouver Sun, and other publications.

Before becoming a playwright and performer, Ms. Hicks worked in publicity for CBS radio and was Manager, Advertising and Promotion for NBC radio in San Francisco. As Press Manager for the public art projects Paintings Below Zero, she facilitated millions of dollars of free international publicity on all media platforms. For these installations in major international cities, she created a temporary fan base of tens of thousands through project-specific blogs.

A Theory of Expanded Love

“paints the conflicts and stories that define the ordinary and memorable, finely etched with myriad details, that altogether reflect back on the readers’ essential humanity.”

“the world of this novel is unforgettable.”

The Thread Collectors: A Novel

“The era, the landscape, and the people are etched in fine and imaginative detail.

This Is How We Love

“This Is How We Love: stellar, elegant, gritty, and ultimately an emotional ride infused with love.”

The Falcon's Eyes: A Novel of Eleanor of Aquitaine

“a journey into the heart and longing of a spirited woman discovering her identity outside societal expectations, her search for personal freedom, her courageousness, and her empathy.”

Four Treasures of the Sky: A Novel

A multilayered story with a narrative driven by fate and a passionate search for identity and survival in the face of meaningless trauma, Four Treasures of the Sky by Jenny Tinghui Zhang i

“Engaging, suspenseful, courageous, and brimming with a warm heart, Take My Hand will stay with you long after the last page.”

The Good Wife of Bath

The world in which Geoffrey Chaucer created his considerable body of writing often painted women as the gateway of the devil, insatiable sexual monsters who consumed their men with their crude, las

At first glance, the new novel by Anne Tyler, French Braid, breaks all the rules of exemplary fiction.

“Kerri Maher’s The Paris Bookseller is a worthy homage to Sylvia Beach and a love letter to all bookstores, libr

When We Lost Our Heads: A Novel

One of the joys of reading literature is discovering an astute author’s powers of observation and finding these deliciously woven throughout the narrative.

Everything We Didn't Say: A Novel

“Baart is an accomplished storyteller. She excels at layering concurrent plot threads, character arcs, and suspense with layer upon layer of storied detail . . .

“Atacama is an important witness to history, an homage to the people of Chile, Peru, Spain, and all oppressed citizens anywhere in the world.

“For sheer reading and reflecting pleasure, These Precious Days is a treasure.”

The One Hundred Years of Lenni and Margot: A Novel

Should We Stay or Should We Go: A Novel

The premise of this novel about a couple in their fifties, who make a pact with each other to off themselves on their 80th birthday, is a study of themes that author Lionel Shriver investigates in

When Stars Rain Down

A young, Black woman in Parsons, Georgia, raised by her grandmother and living somewhat contentedly in a community of God-fearing good folk comes of age in 1936, surrounded by a world built on slav

The Ride of Her Life: The True Story of a Woman, Her Horse, and Their Last-Chance Journey Across America

Elizabeth Letts, New York Times bestselling author of The Perfect Horse, has written an adventure inspired by a real person who faces the predicted end of her life with bold audac

I’m Staying Here is a simple title surrounding a profoundly moving story about ordinary people trying to live their lives as farmers, as they have for centuries. It’s 1923.

Pale Morning Light with Violet Swan: A Novel of a Life in Art

Marvelous and painful, truthful and penetrating, this novel, with every page, requires the reader to sense, to live in and cherish the present moment.

The Bell in the Lake: A Novel

“The world that Mytting brings the reader into is a lost world of simplicity and harshness and a stunning beauty where almost everything is within plain sight, and yet almost nothing can be

The Mermaid from Jeju: A Novel

It seems a shame when a story begins with the death of the protagonist, but it signals the book’s trajectory and creates a story that must be told, now, lest it be forgotten.

“I cannot stop this moving train,” says Sharifa who has returned to the country of her childhood, India, with her husband and their seven-year-old daughter, Zee.

You like this character, she’s under your skin; you want to go on this journey with her. And then she says, “I’ve decided to die.” It’s only page 27.

A Door Between Us

“Why struggle to open a door between us when the whole wall is an illusion?”

The Resurrection of Fulgencio Ramirez: A Novel

1986. Fulgencio Ramirez, a pharmacist in a border town called La Frontera, reads the obit section every morning, waiting for a man to die so he can move in and scoop up his wife.

The Fear of Everything

“although McNally’s stories seem unbelievable at first, they throb with a recognizable human heartbeat, powered by love and regret and the mystery of life.”

Behind the Red Door: A Novel

“Behind the Red Door by Megan Collins is a chilling psychological drama as disturbing as it is mysterious.”

Winner of the 2020 International Book Award for LGBTQ Fiction, Carousel is the debut novel of April Ford and the story of a middle-aged woman caught between the buried emotional impact of

The Book of Longings: A Novel

“The Book of Longings is well named, well inspired, and well imagined—a superlative effort from a writer at the top of her game.”

My Dark Vanessa: A Novel

"Because it’s so topical and #MeToo and yet not #MeToo at all, because it’s written with so many nuanced and believable details, My Dark Vanessa is gripping from the first

Mr. Nobody: A Novel

“A clever story with a well-written and worked out plot, a window into the world of neuroscience and a meditation on consciousness and identity, Mr.

The Majesties: A Novel

“The Majesties, although it rolls out easily, troubles deeply, haunting and even chilling its reader well beyond the final page.”

The opening chapter of Fishnet, the debut novel by Kirsten Innes, is a mystery that takes almost the entire novel to piece together. Who is speaking? What is happening?

Invisible as Air: A Novel

Readers of literature, especially those trained in the classics, come to every book and novel with not-so-deeply-buried expectations that the book they’re about to open, the story they’re about to

The Third Daughter: A Novel

“The Third Daughter is a tribute to the women who endured, who killed themselves, who were brutalized, who escaped, who lived the horrors described therein.

The Butterfly Girl: A Novel

“Sympathy for Celia and a curiosity about children trapped in bunkers with psychopaths keeps the heart of this novel beating . . .”

The Opposite of Fate

In her latest novel, New York Times bestselling author Alison McGhee tackles a moral conundrum that promises to push all the buttons around freedom of choice.

Never Have I Ever: A Novel

“Twists and turns abound in this suspenseful story, like the layers of an onion, peeled away one by one as the story progresses.”

A Matter of Will

Another Wall Street story of youthful ambition, innocence seduced and corrupted by vast wealth, evil scammers and the promise of happily ever after.

The Dream Daughter: A Novel

In The Dream Daughter, time travel, the Vietnam War, North Carolina, and the modern digital world are all backdrop for a mother’s connection with and devotion to her unborn child.

The Naked Truth: A Memoir

The Naked Truth, a memoir by Leslie Morgan, bestselling author of Crazy Love and Mommy Wars, is proof of an experienced writer.

“For anyone who’s ever wanted to conquer the Big Apple, this novel allows a vicarious experience while witnessing close up the early saga of the force that Cosmopolitan became for

When All Is Said: A Novel

The first page of When All Is Said is an advertisement from a Thomas Dollard for an “Edward VIII Gold Sovereign Coin, 1936. Willing to pay top price.”

“A lovely book, a worthy debut novel, a satisfying read.”

The Woman in the Lake

" It’s fascinating to look back at life centuries ago, to imagine the people and their circumstance, and this novel fleshes them out with an assured storytelling style."

The Only Woman in the Room: A Novel

"a worthy read about this gorgeous and talented woman."

The Glass Ocean: A Novel

The Glass Ocean, an ambitious project written by three New York Times bestselling authors is a work of historical fiction mixed with a huge mystery at its core and a couple of rom

Miss Kopp Just Won’t Quit presents a feisty, eccentric woman in the fall of 1916, way before women’s lib was even a term.