Bending Toward Justice: The Birmingham Church Bombing that Changed the Course of Civil Rights 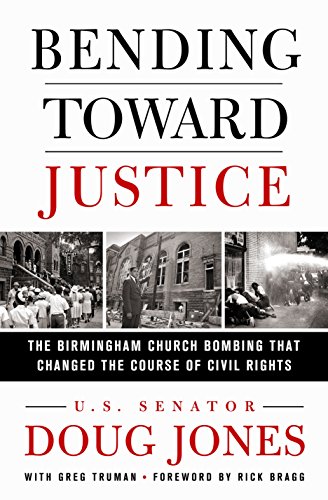 “The heart of the book . . . is the search for justice for four little girls—Addie Mae Collins, Cynthia Wesley, Carole Robertson, and Carole Denise McNair—and, as the arc of the moral universe bends toward justice, their names and lives should be remembered.”

In September 1963, a bomb planted by Ku Klux Klansmen exploded at the 16th Street Baptist Church in Birmingham, Alabama, taking the lives of four innocent girls. Justice took the long way, but almost 40 years later, Doug Jones prosecuted the criminal cases that sent aging Tom Blanton and Bobby Frank Cherry to prison for the rest of their lives. When he was chastised for prosecuting Blanton and Cherry in the early 2000s when they were “old men,” he bristled. “Surely the culpability for murdering four girls doesn’t diminish when you qualify for AARP?”

In Bending Toward Justice, a title derived from Martin Luther King’s statement “The arc of the moral universe is long, but it bends toward Justice,” Jones delivers a gut-wrenching account of the bombing and its impact on the community, and how he was inspired to seek justice for those little girls who were killed in his home town while he was just a boy. As Jones writes, “[O]ur approach was to ensure, ultimately, the jury knew this was about providing justice for the victims, not making a mark in history books.”

Bending Toward Justice will appeal to readers of history who are familiar with the inequities of the Jim Crow south. But more importantly, it opens a door to unpleasant truths for younger readers for whom tales of segregation, lynchings, bombings, and cross burnings sound more like ancient history or, worse, have the ring of fiction in their unfamiliar ears. For others, like readers of this reviewer’s generation, these are events that happened in our lifetimes. Jones’ account is a cautionary tale of the evils that can, and have in the past, take root when, as Edmund Burke admonished, “good men do nothing.”

Jones, now a United States Senator from Alabama, is one of those “good men” who did something. Bending Toward Justice provides a fascinating insight into exactly what that “something” was and the magnitude of seeking justice in a case that was not only “cold,” but was frigid. Aging defendants and witnesses, fading memories, and a “what’s done is done” mentality among some were just a few of the obstacles that he and his prosecution team had to overcome.

One of the most interesting aspects of the book is not only how the prosecution team dealt with the problems created by the passage of time but also that it takes the reader into the “war room” when strategy is discussed and decisions made as to which witnesses to call and when, which witnesses to avoid, and how to structure the presentation of evidence. “This was a time for confidence, pride, and conviction, to piece together the story for the jury without missing a detail or leaving room for misinformation or uncertainty. Our case was circumstantial, but there was no doubt all the pieces fit.” For the legal thriller junkie, it’s a treasure trove.

Jones also describes how the church bombing shaped his own life, even though he is white and was not actually a part of the community torn apart by those events of the early 1960s. As he writes, “I was nine. I was white. I was lucky.” However, not being a part doesn’t mean not having empathy. Inspired as a law student when he witnessed the trial in 1977 of Robert Edward “Dynamite Bob” Chambliss, the first of the three bombers brought to justice, Jones was fueled by idealism as he started his law practice.

Little did he know that more than two decades later he would step into the shoes of his hero, Alabama Attorney General Bill Baxley, who prosecuted Dynamite Bob Chambliss, and he would finish the task Baxley started. He notes the response of Baxley to a letter from a leader of a right-wing group opposed to Baxley’s investigation leading up to the prosecution of Chambliss, “My response to your letter of February 19, 1976 is—kiss my a--.” For directness, that surely has to rank with the reported response to a Nazi demand for surrender at the Battle of the Bulge by Brigadier General Anthony McAuliffe: “Nuts!”

Following the convictions of Blanton and Cherry, Jones continued his public service, cautioning that “the worst parts of our history repeat themselves unless people of goodwill speak up and take decisive action.” One action he took was to run for the United States Senate, to replace Jeff Sessions who had been appointed Attorney General.

The latter part of the book covers Jones’ campaign for, and election to, the Senate, which is somewhat anti-climactic to the emotional crucible of the trial of the bombers. It is, however, certainly the logical next step in the author’s progression, both professional and personal.

The heart of the book, though, is the search for justice for four little girls—Addie Mae Collins, Cynthia Wesley, Carole Robertson, and Carole Denise McNair—and, as the arc of the moral universe bends toward justice, their names and lives should be remembered.

For those who say that justice delayed is justice denied, Jones replies, “Delayed justice didn’t provide closure, but it was a form of community and personal redemption. I am a more complete person for it, and maybe the world is a slightly better place too.”

This reviewer thinks it is.