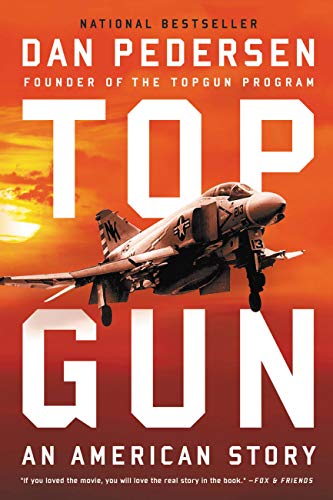 "in Topgun, Pedersen has the reader even looking forward to the next paragraph."

Jet fighter pilots are literally over the top, on the edge, and off the radar. Even 83-year-old author Navy Captain Dan Pedersen still fills "with a sense of rapture that only exists out there on the razor's edge" when "lifting my eyes to the sky whenever a jet roared over."

For such pilots, Navy Aviation Weapons School fed that passion, officially and unofficially. Pedersen wrote, "we flew almost whenever we wanted, and whatever we wanted." "We live harder, party harder, womanizer harder, and are somehow larger than life."

But "you had to love it more than anything else to stick with it when things went terribly wrong." "Navy aviation is an unforgiving calling" where "one error and people—including yourself—die" including in training. "Flying is a dangerous game of risk versus reward" and "the demands of the job versus the need for a personal life."

These men, however, "are flesh and blood." In Vietnam, the pilots faced "the most fearsome air defense network in the world" to take out targets "to make no difference in the war to the south."

"Worse, we were losing the larger war." Pedersen describes Operation Rolling Thunder in the Vietnam War, Pendersen's first combat mission: "it had nothing to do with tangible results or victory." The pilots could fly over the enemy's newly arrived "weatherized MiGs and surface to air missiles" while not allowed to destroy them or attack North Vietnamese airfields.

"On rare occasions some men turned in their wings and went home." "Vietnam was chewing us up." Commercial "airlines were hiring, offering salaries double or triple" what the Navy paid.

Pedersen writes that the Navy had a 200-page report by Captain Frank Ault that laid out its shortcomings with pilot training and weapons while calling for the creation of a special fighter school. It came about because of Vietnam and had to begin immediately.

In creating the Navy Aviation Weapons School, what came to be known as Topgun, the Navy "gave the appearance of doing something to change things." "The program almost seemed designed to fail."

Tight budgets after the Korean War cut back on the level of training needed. Pedersen's first assignment in a war zone was on a World War II aircraft carrier reworked for jets and flying the dodgy unforgiving F3H Demon interceptor. "The loss of expensive aircraft could be (painfully) overcome, but the loss of well-trained pilots who took years to learn the ropes was a double blow."

The job of creating the Navy Aviation Weapons School went to the author, then only a lieutenant commander. Pedersen had served as an instructor in Fighter Squadron 121, the largest squadron in the Navy and the training school for the Vietnam War. They flew, however, "within strict safety parameters." "That's not how you want to send a young man to war."

The nine original officers of the Topgun school "chopped red tape," "broke rules," and "borrowed, stole, or horse-traded for everything we needed." Pedersen had a free hand to not just to improve fighter pilots but to teach how to teach what they learned.

Much of Topgun is the memoir of Dan Pedersen, the son of immigrants, and his discovery of reality versus his movie inspired "visions of glory." The influences of his Southern California upbringing and Pensacola training encouraged in him devotion, patriotism, and the tradition of Navy aviation, but mostly of jet flying.

Like Mark Twain's lessons as a riverboat pilot, Pedersen learned that with a jet "your fate is in your hands." "Blaming others is just a dodge." Unlike a riverboat, however, with a jet, the pilot must "believe the gauges over the wisdom in your own gut" although "you have to think a step or two ahead at all times."

The lively prose is gripping in a subtle way and while some writers struggle to keep interest from chapter to chapter, in Topgun Pedersen has the reader even looking forward to the next paragraph. No technical knowledge needed, the author writes for a general audience.

Often the author repeats phrases but that gives the narrative intimacy. The book also jumps around in its organization although the reader becomes too engrossed to care.