Scoundrel: How a Convicted Murderer Persuaded the Women Who Loved Him, the Conservative Establishment, and the Courts to Set Him Free 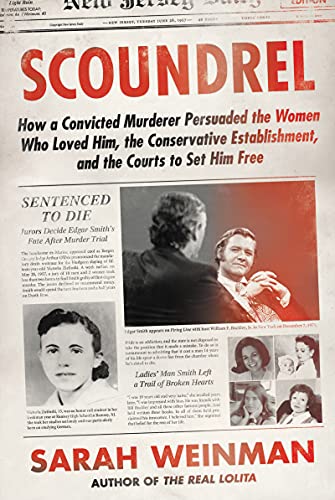 “succeeds in capturing the full story behind a notorious murderer’s brazen quest to avoid the death penalty by any means possible.”

“Brilliant people can be conned,” writes true-crime author Sarah Weinman. In Scoundrel, she details how it can happen through the astonishing case of Edgar Smith (1934–2017), a sociopath convicted and imprisoned for the brutal 1957 first-degree murder of a 15-year-old New Jersey girl. A handsome, sweet-talking charmer, Smith became a minor celebrity and bestselling author. He escaped death row after years of legal maneuvering and advocacy on his behalf by conservative writer William F. Buckley, Jr., and others, all convinced of his innocence.

It is a complex story, and the reader knows from the start that Smith viciously bludgeoned honor student and cheerleader Victoria Zielinski (her skull was crushed, her face destroyed). Buckley, who championed Smith’s case for years in his magazine National Review (NR) as well as in Esquire and elsewhere, was “captivated” by the convict’s writing ability (they exchanged 1,500 pages of letters over nine years), and convinced that Smith, who kept proclaiming his innocence, was “acting in the best possible faith.”

Early on, Buckley had learned that Smith was a devoted NR reader while incarcerated in the New Jersey state prison, where he would spend 14 years on death row. Flattered, he arranged a free subscription for the murderer, visited him in prison, and helped arrange publication of his book Brief Against Death, which insisted on Smith’s innocence.

In 1971, after many failed attempts, Smith successfully appealed his conviction, claiming he had confessed to first-degree murder under duress. In a new trial, he was released on parole after accepting a charge of second-degree murder.

Young Buckley’s gullibility (he was 36, not yet a celebrity himself, and had founded NR only a couple of years before) is remarkable. As a former NR editor later remarked, “We were taken in . . . in part by our willingness to believe that anyone who loved NR could be a savage killer.”

Buckley clearly benefited greatly from making Smith’s case a national cause. An oil man’s son, devout Catholic, and brilliant debater (he was a “master” of the cutting remark), he won enormous national exposure for his advocacy, and launched his popular TV talk show Firing Line during the period.

He was soon fully “invested” in the case, believing (as Smith argued) that someone else had committed the crime. He was genuinely devastated years later, when Smith attempted to murder another woman while on release from prison in California. When that happened, Buckley turned the fugitive Smith into the FBI.

Weinman, author of The Real Lolita and now crime columnist for The New York Times Book Review, draws on a plethora of letters and news coverage to offer this meticulous, well-researched, sometimes overlong account. Hardcore true-crime buffs will wallow delightedly in her frequent excerpts from the Buckley-Smith correspondence and from courtroom testimony. For others, the lengthy, unnecessary quoting sometimes becomes tedious.

There are few sympathetic players in these pages. Everyone has an agenda.

One person notably “fooled” by Smith was the “dynamic and vivacious” Knopf editor Sophie Wilkins, who in her early 50s became “besotted” with Smith while working with him on his nonfiction bestseller. “They exchanged declarations of love, gifts and artwork, and mutual pornographic fantasies,” writes Weinman.

“Humans are hardwired to believe what other humans tell them,” the author observes. “Most people merit that belief and, when they breach it, try to atone for their mistakes. Then there are those humans who are able to manipulate, obfuscate, and make a mockery of well-meaning people, causing harm that takes years, if ever, to fully overcome.”

Smith’s wives, paramours, and female friends “suffered psychological damage that lasted the rest of their lives,” she writes. His “horrible acts” were “explained away . . . because of his talent—and because women are expendable.”

Like Buckley, the Knopf editor had an incentive for befriending Smith. Deemed “brilliant and entertaining but also exhausting” by coworkers, she often found herself unable to get desired book projects through to publication. In later years, she said “her dealings with Edgar had always been in bad faith: that she had simply longed for a book she could consider her own and had coaxed it out of him ‘by whatever means were available.’”

A bit lengthy, Weinman’s absorbing and highly readable book succeeds in capturing the full story behind a notorious murderer’s brazen quest to avoid the death penalty by any means possible.