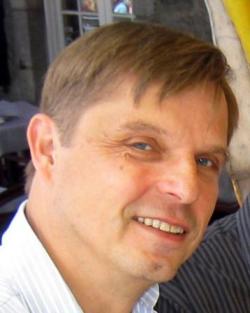 Geza escaped from Hungary with his family during the Revolution in 1956, immigrating to Canada. He grew up in Toronto, where he attended the University of Toronto Schools, and has degrees from Harvard and Oxford Universities (this as a Rhodes Scholar) and the London School of Economics. He worked in the Ontario Pavilion at the world’s fair, Expo 70, in Osaka, Japan, and represented Canada as an epée fencer in the 1976 Olympic Games in Montreal.

Geza Tatrallyay has worked in government, international organizations, finance, and environmental entrepreneurship. Since retiring in 2004, he has devoted himself to writing and now has eight books published, including the Twisted trilogy of international crime thrillers, two memoirs, and two collections of poetry. His poetry and articles have been published in journals in Canada and the USA.

Mr. Tatrallyay is married with two children, and when not travelling, divides his time between Barnard, Vermont, and San Francisco.

For the Children: A Cold War Escape Story

“With wonderful writing, Alyssa Songsiridej has created an exploration of how romantic relationships can and often do evolve . .

If you are a lover of Christopher Moore’s work, this one is for you.

The Latinist: A Novel

“The writing is excellent, the characters well rounded with believable human flaws and peculiarities, and the plot intriguing with lots of learning for the reader.”

“This is a remarkable little book with a poignant political and social message that should be read by everyone who cares about this country.”

The Secret Lives of Dentists

13 Days to Die is a riveting international thriller touching on a threat that is very relevant today: a virus from China, used as a weapon to create a pandemic.

As the world faces down a crisis of epic proportions—a pandemic not a mere epidemic—it is refreshing to lose oneself in the story of a 15-year-old girl, left largely to her own resources by her

A Spy in the Struggle

“The writing is strong, the dialogue is realistic, and her characters are well depicted and believable.

The Arctic Fury: A Novel

“Macallister’s writing is powerful, and she concocts a gripping story with strong, very human characterizations . . .”

Plagues, Pandemics and Viruses: From the Plague of Athens to Covid 19

“An important book for the times!”

The Evening and the Morning (Kingsbridge)

“the story Follett weaves grabs you from the start and holds you in its grip till the fairy tale ending.

Dead Doubles: The Extraordinary Worldwide Hunt for One of the Cold War's Most Notorious Spy Rings

“Anyone interested in Russia’s continuing undermining of the West, espionage, or simply a good thriller read should delve into this book.”

The Russian: A Novel

“the storyline is strong and suspense is maintained throughout this fast-paced novel, but one would have hoped for more from Coes for the first book in a new series.”

“The Dutch Maiden is a well-crafted gothic romantic story, with strong characters, set at a difficult time in Europe.”

“definitely a book that should be on the list of all noir lovers.”

Quill of the Dove (MiroLand)

Shell is set in the Australia of the mid-1960s, the Vietnam war era, the time the revolutionary Sydney Opera House was under construction in Sydney harbor.

Joseph Olshan succeeds in crafting an enthralling mystery set in snowy Vermont, at the center of which is the disappearance during winter break of Luc Flanders, a student at Carleton College (reall

Mine: A Novel of Obsession

Mine is a hybrid between a legal thriller and a romance novel set in modern day England.