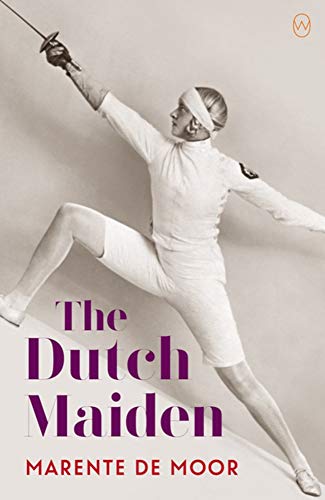 “The Dutch Maiden is a well-crafted gothic romantic story, with strong characters, set at a difficult time in Europe.”

The Dutch Maiden is an engaging tale that focuses on Germany at the end of the Weimar Republic when the Nazis are starting to gain control. As the story begins, the Berlin Olympics have just been held, where Helene Mayer, a beautiful German fencer—a “Mischling”—with Jewish ancestry has taken the silver medal. At the Amsterdam Games in 1928 she had won both the gold and the heart of Janna, a young Dutch girl, who makes Helene her role model.

Janna—The Dutch Maiden—wears down her father’s resistance to her desire to take up fencing, and when he finally allows her to have her own weapon Janna feels she has become an adult: “With this weapon, my own foil, I became a grown-up.” He pleases her by sending her to local fencing classes in Maastrich where Janna improves as a foil fencer.

But when the father—a doctor during World War I—learns that a former patient of his whom he had treated in an internment camp lives just across the border near Aachen on a rambling estate and is teaching fencing there, he decides it would be good for his daughter to spend several months with him to refine her fencing ability. “We both knew I had to seize this opportunity to achieve something in sport, or would I rather go into domestic service?” Janna convinces us.

So with an exchange of letters and a half blurred photograph of her father with the patient, the still impressionable Janna is sent off to live with Egon von Bötticher, the cynical and scarred minor German aristocratic fencing master on Raeren, a strange, run down gothic estate.

She is housed on the topmost floor of the tower, which is always full of pigeon dung, and the only warmth seems to come from Lena, the housemaid, whom she often helps in the kitchen. Lena’s husband Heinz, the caretaker, it turns out is a leading local Nazi around whom everyone treads carefully.

Janna is clearly ready to fall in love, as when she arrives and sees the handsome but rather strange fencing master her romantic feelings are awakened. Soon thereafter, one of von Böttcher’s former lovers shows up with her stunningly beautiful twin boys, both sabreurs, who at first are more interested in each other than in Janna, but over time, change both physically and behaviorally and one of them—Friedric—starts to pay more attention to the 18-year-old young lady.

Early on, Janna is exposed to the mythical Mensur when an odd coterie of male visitors comes to the estate to have two of their number engage in a duel close-up with bare faces to earn the scar of honor. As the daughter of a doctor, Janna is enlisted to help stem the bleeding of the cut fencer.

Von Böttcher complements the fencing lessons for Janna with horseback riding and she becomes intrigued by his strange relationship with the animal kingdom—horses, dogs, and rabbits.

Janna, whose romantic interest in the aristocrat is finally reciprocated, finds a series of received and unsent letters in von Böttcher’s desk. She becomes obsessed with these and as she reads them, she starts to unravel the strange relationship between her father and his patient.

The Dutch Maiden is a well-crafted gothic romantic story, with strong characters, set at a difficult time in Europe. Von Böttcher’s wounded but intriguing character is allowed to emerge slowly chapter by chapter, while Janna’s determination to live her life shines through at all times. The writing is strong and the translation flawless. This is a thoroughly enjoyable novel with the added benefit that the uninitiated learns a lot about the world of fencing.