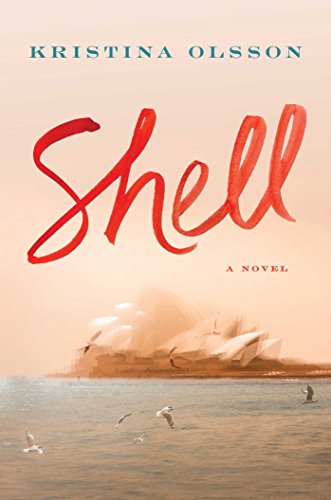 Shell is set in the Australia of the mid-1960s, the Vietnam war era, the time the revolutionary Sydney Opera House was under construction in Sydney harbor. Kristina Olsson weaves her Scandinavian background with her Aussie world to intermingle the lives of an anti-war Australian journalist, Pearl Keogh, and a Swedish glass craftsman, Axel Lindquist hired by the Danish architect of the Opera House, Jorn Utzon to craft some of the key pieces for the lobby.

Pearl’s mother passed away suddenly when she was still a teenager, so Pear is forced to help raise the rest of the children, including her two younger brothers, Will and Jamie, who run away from their abusive boarding school to work in the more remote parts of Australia. Pearl is desperate to find the boys before their lots are drawn in the newly introduced draft lottery, risking her career with her anti-war protest activities.

She meets the exotic Axel in a bar, attraction follows, develops into love. Olsson beautifully captures the budding relationship:

“Later it would be her voice he remembered, and her eyes. Or rather, a sense of being seen. They’d spoken but they hadn’t met. Their few words might fit into a palm, rubbed with a thumb, tossed up to feel their weight. Why did he feel a transaction had been done, a proposal made and agreed to?”

Or later, this time from Pearl’s point of view:

“She thought about this. The thin curtain lifted and fell, an echo of his accent: the words settled on her skin. On the weight of her legs and shoulders against the sheets. She closed her eyes and turned to him. They slept.”

The backstories of both protagonists are gently teased out, and Olsson masterfully captures the different cultures they come from—Scandinavian and Australian—and that she weaves together. The difficult political environment in Australia at the time, the stupidity of Australia’s participation in the Vietnam war, the progressive pettiness and lack of understanding by the government of the genius behind the Opera House, and the eventual hounding and sacking of Utzon are a backdrop to the love affair between Pearl and Axel.

Axel’s love of his craft is a central element of the novel, poetically captured by Olsson:

“In the glass shed light played over the casting frame like a bow over an instrument. A violin, a cello. Points of light, delicate, struck the surface of the glass, picking out the strands of deeper color, the miniature shapes and figures within. Axel remembered what his teacher had said: glass swallows light. Then redirects it, diffuses it, throughout the vessel.”

Indeed, glass, water and the sky play a key role throughout Olsson’s writing, just as in Axel’s complex persona:

“Below the cliff path the ocean was a giant’s chest, bronchial, heaving itself over rock.”

“From a distance and in a shimmer of night light, the sails themselves might be new celestial forms, a new constellation or galaxy in the southern sky. Might do the same work as the Southern Cross, he thought, guiding people home.”

Olsson’s writing is beautiful, captivating, and is enough in itself to recommend this book. As evidenced, her descriptions are vivid, evocative.

One thing though might have been done differently: in some sections, the sudden change in point of view broke the flow and was unnatural. Better to have a section break.

Overall, four stars out of five.