Plagues, Pandemics and Viruses: From the Plague of Athens to Covid 19 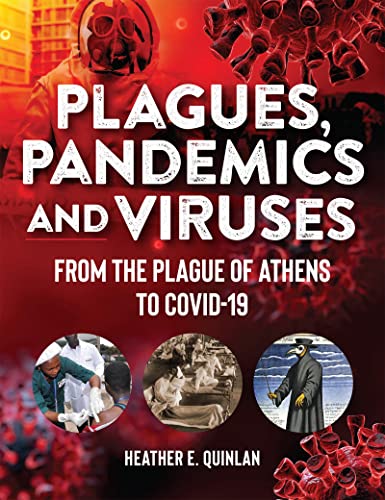 “An important book for the times!”

Plagues, Pandemics and Viruses: The Plague of Athens to COVID-19 is a comprehensive book of nonfiction that delves into all aspects of infectious disease epidemics: the science and the history, as well as, importantly, the social and cultural aspects of these diseases. This is a very relevant read for what the world is going through at this particular time in history.

This book is very readable, as Heather Quinlan—using pictures and panels throughout the book—makes the underlying science of infectious disease easily understandable for the layperson, and more importantly, weaves it all into a gripping tale. She lays the groundwork by meticulously telling us about microbial pathogens—what are bacteria and viruses—and explains how our immune systems work to combat them. And she takes us through the thrilling historical background of how vaccines and antibiotics were first developed.

Indeed, the book is at its best as an overview of humanity’s ongoing struggle with plagues and pandemics, how the outbreaks caused by these microbes have in many cases changed the course of history, and how the induced suffering and societal disruption has spawned the creation of some cultural masterpieces.

Quinlan meticulously explores all the major plagues and pandemics in our past and present, starting with the plague of Athens and ending with today’s horror, COVID-19. She covers in depth the Black Death caused by Y.pestis, the “Plagues of Africa and the Tropics”—yellow fever, E\bola, and zika—the destruction caused by smallpox in the New World, the various sexually transmitted infections—herpes simplex 1 and 2, gonorrhea, chlamydia, syphilis, HIV/AIDS—and the “epidemic” addictions to alcohol, crack, opiods, etc. that plague our societies today, as well as the “do-or-die-battles” against rabies, tuberculosis, cholera, and polio.  A chapter on the Spanish flu leads into a discussion of coronaviruses, ending with today’s COVID-19.

The learning, in some instances, is shocking: We have all no doubt heard of the Black Death, but the extent to which it devastated especially Europe over a span of centuries is truly humbling. As Quinlan says, “only about two out of ten people who caught the plague recovered. Whole families—whole villages—were erased as if they’d never existed.” And in England, “within two months about two million of England’s five million plus inhabitants were dead” in the plague of 1348–49.

Quinlan shows us how these plagues and pandemics have changed the course of history. Examples are the devastation of Amerindian civilizations by the smallpox pathogen brought by the European conquistadores—killing between “one-quarter and one-half of the population of central Mexico.” These were the Aztecs, but smallpox did similar damage to the Inca and the Maya in subsequent waves.

The misnamed Spanish flu of 1918–9, just outside living memory, was “one of the worst disasters in recorded history” and had a devastating impact on humanity. Not only did it infect more than “a billion people worldwide”—mostly striking “the young and the healthy”—and killing “between 50 and 100 million,” but it also had immeasurable indirect impacts on mankind’s fate. For example, some historians now surmise that the flu Woodrow Wilson caught at a crucial time at the Paris Peace Conference in 1919 may have been responsible in part for his abandoning his Fourteen Points and imposing a harsh treaty on the losing Germans, and that this would eventually be one of the underlying causes of World War II.

Quinlan chronicles how many of the great works of literature and art grew out of, or were influenced by, our contact with these pathogens: Boccaccio’s Decameron and Chaucer’s The Canterbury Tales from the plague; Shakespeare’s Measure for Measure, Troilus and Cressida, and Timon of Athens by syphilis; and more recently, Thomas Wolfe’s Look Homeward, Angel and Willa Cather’s One of Ours by the Spanish Flu—just to name a few. Throughout history, the lives of great artists, writers and composers lost to the plagues and pandemics during their prime years of contribution have also shaped culture: Franz Kafka, Gustav Klimt, Egon Schiele, Guillaume Apollinaire, and Georgia O’Keefe all died from the Spanish flu just to name a few.

The book ends with an in-depth interview of Dr. Anthony Fauci, the Director of the National Institutes of Allergy and Infectious Diseases, and an admonition of what we must do collectively to help combat the current pandemic COVID-19. The entire book, though, underscores the point that this must be on ongoing vigilance on our part since these microbial pathogens are everywhere and can start to cause devastation through a slight mutation, or change in habit or the environment.

An important book for the times!