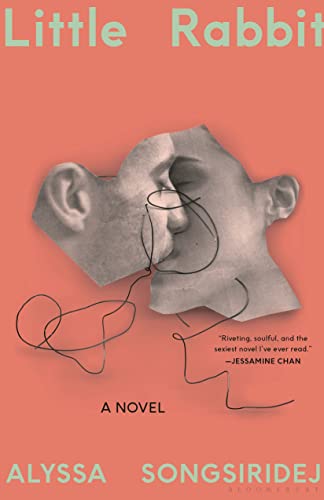 “With wonderful writing, Alyssa Songsiridej has created an exploration of how romantic relationships can and often do evolve . . .”

In her debut novel, Little Rabbit, Alyssa Songsiridej explores the evolving relationship between an up-and-coming young bisexual female writer and a middle-aged choreographer she meets at an artists’ retreat in Maine.

Not attracted to the man at the retreat, finding him full of himself and domineering, “Little Rabbit”—the nickname given our protagonist by the choreographer against her wishes—is nevertheless intrigued enough to accept an emailed invitation to one of the troupe’s performances when they come to Boston.

After the show, they repair to his hotel’s bar to catch up. She is drawn into the choreographer’s spell, in spite of her misgivings, and knows immediately that she will sleep with him. After they part, the idea knocks about in her head for several months, and she finally convinces a friend at a small cultural magazine to have her do a feature on the choreographer and his company. She gets in touch, and he invites her to New York, saying, “You can stop in on a rehearsal.” At the practice, she is mesmerized by the dancers and the dancing, in particular with the female lead, Jackie.

The relationship between the choreographer and Little Rabbit develops, and he makes more and more violent demands on her, although always stepping back from the non-consensual, and she finds that she becomes addicted to this type of sadomasochistic sexual coupling. On her trips back to Boston, where she has been sharing an apartment with her longtime girlfriend, Annie, and to New York to visit the choreographer, she finds her previous life less and less satisfying and accepting—indeed, Annie becomes protective when she sees the bruises on Little Rabbit’s body, and along with her family and other friends, mocks and demonizes the choreographer. Other than her other best friend Esme, who has just been through a difficult lesbian relationship, which has ended unsatisfyingly for her, who exudes understanding.

After Little Rabbit writes an article inspired by the relationship that is ultimately published in a prestigious journal, the pairing normalizes, becomes less violent, softer. Driven partly by Annie’s intolerable jealousy and her increasing acceptance of her new life with the choreographer, Little Rabbit moves in with him and their lives become even more interwoven.

The choreographer creates a new ballet inspired by Little Rabbit, to which she accompanies him and is recognized by everyone as his “partner.” The performance features Jackie as the lead, and it literally blows Little Rabbit away—and when at the end, “The lights cut, plunging us into darkness, the crashing sound of applause filling the open space. My throat cleared, I couldn’t breathe, choked by the blood flowing through my own body. I won’t survive this. And then I was out of my seat, up the aisle and running.”

The choreographer finds her where she collapsed outside against the wall, and it is his touch that resuscitates her, brings Little Rabbit back to life, and their love to a new level:

“The understanding breathed between us, quiet at first before stirring with new life.”

With wonderful writing, Alyssa Songsiridej has created an exploration of how romantic relationships can and often do evolve—the initial phase that grows from tentative attraction to infatuation, the exploration of sexual intimacy of different degrees, the various trials of learning to live with each other, and finally the acceptance of an achieved normalcy, with various types of jealousy thrown in on the side. A different cut in the book also explores the relationship between a well-established older artist and an up-and-coming much younger one.

This is a deep novel that is well worth a read, and since it has several different layers, perhaps even more than one. Enjoy!