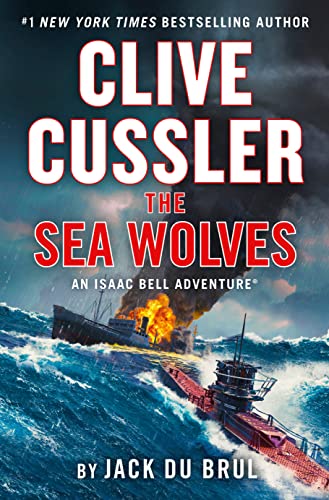 “The writing is strong, the suspense well-built and maintained, characters roundly constructed. This is a book to read especially for lovers of historical fiction.”

Jack du Brul, a first-class author in his own right, who coauthored several books with the recently departed famed author of thrillers, Clive Cussler, has taken over the mantle with the 13th Isaac Bell adventure. The Sea Wolves takes place at the outset of World War I, largely in the U.S. Northeast and in the waters of the North Atlantic. Du Brul bases the storyline on the successful efforts by German submarines to torpedo American ships, including the Lusitania, that they believed to be supplying arms to their enemies.

With England about to declare war on Germany, the U.S. has started to ship arms and munitions to its ally from the port of New York. The largely ten-year-old surplus guns stored at the Springfield Armory have been bought by the private Winchester Arms from the feds, as a way to circumvent the U.S.’s declared neutrality, with the whole operation steered by the Van Dorn Agency, which has been hired by the British government. The guns are shipped to, then re-crated and relabeled at the Winchester factory for shipping to the U.K. With Van Dorn’s agents supervising the sensitive operation, five of the guns are found in a janitor’s closet, the lock of which has been picked. Isaac Bell, the Agency’s lead investigator, who has been overseeing the task, calls a halt to it and demands that none of the workers be allowed to leave. He suspects that something seriously more sinister is involved than just the misplacement of a cache of old rifles.

In fact, Bell suspects that the guns were removed with the intent of putting something else in their place, and after successively weighing the packages in groups of ten, the Van Dorn operatives find the suspect crate which has in it “two heavy deep-cycle batteries . . . wired to a radio transmitter through a circuit that included an alarm clock with its clacker removed” and an antenna wire. Bell and his buddy Archie Abbott surmise that “it’s a tracking beacon” to inform German submarines of the whereabouts of the ship, so that they can be torpedoed to prevent the arms from reaching Britain. It is clear to them that German agents have figured out a way to use the new technology of radio transmission from lighthouses and floating balloons along the eastern seaboard to block arms from reaching Britain.

The mastermind behind the German scheme is Max Hessmann, whose recent escape from the notorious French prison on the Îles du Salut nine miles off the coast of South America could not have been possible without the help of Bell’s nemesis, Foss Gly. After many twists and turns, Bell and the young naval ensign, Joe Marchetti he has recruited, an expert in the emerging technology of radio transmission, are single-mindedly focused on finding a vacuum tube developed by the Germans to transmit radio signals they suspect must be hidden by Gly and his colleagues on the passenger boat RMS Lusitania, which as it happens, is also carrying crates of arms and ammunition for Britain. If they don’t find it “the Germans are going on a hunting spree across the length and breadth of the Atlantic, and those men, your brothers, are going to die”—not only those on the Lusitania, but also passengers and crew on many other boats crossing the North Atlantic, as well as many British soldiers who will be mowed down for the lack of arms and ammunition.

Yet another episode in the super-hero Isaac Bell’s saga, this one is particularly engaging because it touches on sensitive historical facts including the sinking of the Lusitania. The writing is strong, the suspense well-built and maintained, characters roundly constructed. This is a book to read especially for lovers of historical fiction.