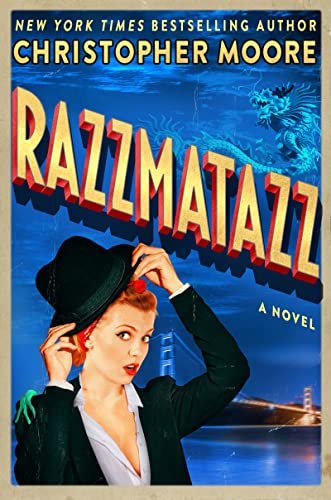 If you are a lover of Christopher Moore’s work, this one is for you. As in much of his other work, he gives us a comic yet perversely realistic view of life in early 20th century Chinatown and Little Italy in San Francisco. He effectively captures the co-existence of the different cultural elements—Chinese, Italian, Anglo-Saxon, gay, druggie, criminal, straight, Catholic and so on—that already then made Fog City such an enchanting place.

The book’s protagonist is Sammy “Two Toes” Tiffin, a down-and-out bartender in a gay bar who is head-over-heels in love with his girlfriend Stilton (nickname: the “Cheese”). The two engage in a lot of “razzmatazz”—and one of the benefits of reading the book is that along the way the reader finds out the meaning of this term.

On the side, the Cheese is building a strange machine in a secret warehouse under the direction of Scooter, the moonman, and with the help of her friend, Myrtle, using the welding skills they acquired during the war. Once finished, Sammy’s taxi driver friend, Milo, drives this contraption underground to a real dragon’s lair, where the sleeping dragon cradles a spaceship that Scooter eventually takes to leave earth.

The action goes from gay bar to opium den and back again, as several drag queens are murdered, leaving everyone, including the San Francisco Police Department vice squad perplexed. Jimmy Vasco, a lesbian club owner, is convinced that she must be next on the list, and hires Sammy to find the killer.

The book has everything: a crazy driving school in a borrowed taxi with a demented sex worker who threatens to lop off the members of any male who gets in her way; as well as among other weird humans, a fictitious dragon that talks inside the head of Uncle Ho, a Chinese immigrant who received his American citizenship at the time the big earthquake destroyed all records—as well as the opium den he used to work at, the dying owner of which bequeaths his stash to Ho. Uncle Ho then establishes his own den and orders his nephew Eddie “Moo Shoes” Shu to help save it from Squid Kid Tang, a vicious gangster who will do anything to get back a priceless antique statue of the powerful Rain Dragon he is convinced Ho stole from one of the Chinese gangs—the tongs—some 40 years earlier. Eddie in turn solicits Sammy’s help; this then takes the two all over the San Francisco area, in particular to the queer bars, and eventually to a Christmas party at the Sonoma Developmental Center arranged by one of the drag queen Madames whose husband has ended up there. The new super-zealous and straight chief of the SFPD vice squad, Captain James “the Nun” Dunne is certain that Sammy is the murderer of the several butch babes and puts a tail on him. The two end up staking out one of the joints where Sammy believes the killer may be meeting his or her potential next victim.

But as the plot thickens, and a key player in unraveling the mystery is Captain Dunne’s wife, whom Sammy dubs “Just a broken kid,” we eventually find out who the killer is. Jimmy Vasco’s rhetorical retort of, “Yeah, ain’t we all?”, followed by Sammy’s comeback of “Some more than others,” sums up the characters in this fun, hard to put down fairy tale.

This plethora of engaging, way-out characters enriches the zany plot in which Christopher Moore roller-coasters the reader up and down. If you love his work, this one is definitely for you!