The Secret Lives of Dentists 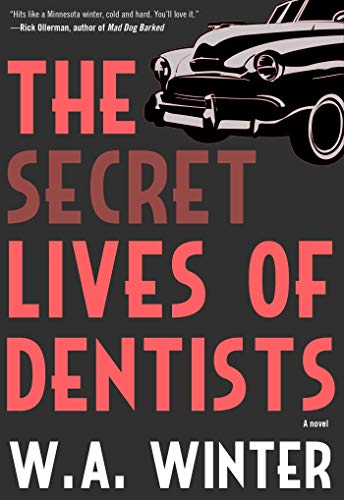 W. A. Winter turns the known bare threads of a true crime event and trial in mid-50s Minneapolis, closely followed in the press at the time, into a masterful work of narrative fiction, fleshing out likely characters and imagining the details surrounding a cold-blooded murder, its investigation, and the showcase trial.

Mid-century Minneapolis is a draw for the young who want to get away from the hard work and boredom of farm life in surrounding states, such as the Dakotas, Iowa, and Wisconsin. It is also still very much a Nordic settlement at this point and considered to be the most anti-Semitic city in the USA.

The Kubicek sisters—hailing from Dollar, North Dakota—are among the many young girls who are attracted by the opportunities for love, work, and adventure that the big city offers. This is true especially for Teresa, by far the prettier of the two, with her slender build, blonde hair, and striking blue eyes. Her beauty, coupled with her reputation as a wild young lady—indeed, some might say a nymphomaniac—means that she is a magnet for men.

With her young baby, Teresa is the more recent arrival and moves in with her sister, Grace, and her abusive husband Bud Montgomery. Teresa’s spouse, Harold Hickman, is in the military, posted to Germany, and it seems that with distance, their love has cooled.

A young journalist, Robert Gardner, is on his way back to his sister’s where he lives temporarily, from an illicit tryst with the married sister of a former girlfriend, when he finds a body in the woods along some deserted trolley tracks early one April morning. He hesitates, but does not dare call the police, as that would mean exposing his secret love affair and besmirching the reputation of his upright family.

The police squad investigating the murder, led by police sergeant Arne Anderson, appears to do a thorough job, and the victim is soon identified as the beautiful Teresa. Although the body shows no signs of violence, closer examination shows that she had sex very soon before she was strangled, and that indeed, she was three months pregnant.

The team comes up with a number of suspects, including a skinny, bespectacled young man (who, we are led to believe, is the journalist), Bud Montgomery, the abusive husband of Teresa’s sister (who indeed admits to having had sex with his sister-in-law); Tony Zevos, Teresa’s boss in the Greek restaurant where she waitressed; and eventually a cab driver who stalked Teresa for a number of weeks before the murder.

Another suspect they zero in on is Dr. David Rose, a Jewish dentist, whom Teresa, on the advice of his sister, visited for the fifth time on the evening of her murder and who has developed a special way to sedate his mostly female victims before a dental procedure. The dentist becomes the number one suspect when one of Anderson’s colleagues is told by Teresa’s doctor that she “. . . was three months pregnant and she’d told him that her dentist—none other than Dr. H. Star-of-David Rose—was the baby’s daddy. She told him that Rose put her to sleep with a pill and then banged her.”

Upon being confronted, Rose admits he was with the girl that evening, and eventually that indeed he had sex with her, but there are no real witnesses nor any forensic evidence that ties the dentist to the murder or proves that he was the father of the unborn child. In a sensational trial, the prosecutor is far outclassed by the well-known defense lawyer, Dante DeShields, who argues that the Jewish dentist cannot get a fair hearing in anti-Semitic Minneapolis. But the decision is left up to a 12-member jury, and it is not clear till the very end which way they will decide.

Winter (real name William Swanson), whose hometown is Minneapolis, knows the city well and paints a very realistic picture of life there in the mid-50s. The human drama of the crime, the investigation, the trial, and the aftermath are laid out with mesmerizing precision, and we get a particularly good sense of the workings of the Minneapolis police force at the time, which is not much different from what one might see today in the George Floyd/Derek Chauvin era. That alone makes this book a worthwhile read for today’s audience.