The Arctic Fury: A Novel 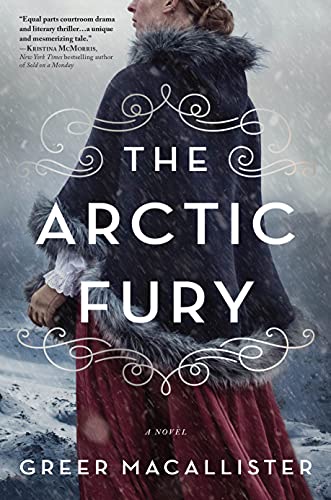 “Macallister’s writing is powerful, and she concocts a gripping story with strong, very human characterizations . . .”

It is Boston in the spring of 1853, and Virginia Reeves, a seasoned female adventurer who helped lead caravans of pioneers across the Sierra into settled coastal California—and is “now waiting here for the next adventure to find me”—is approached by an emissary of Lady Jane Franklin, the wife of disappeared Arctic explorer Sir John Franklin with the proposition that she lead a mission of a dozen women to find the lost expedition. This after four previous missions to the frozen north led by and composed entirely of men had failed to find a trace of the lost crew and the two ships, the Erebus and the Terror.

The Arctic Fury is a historical novel that uses an epic episode of Arctic exploration as the background to a story of adventure and a subsequent trial in which a case for murder is brought against Virginia by the rich parents of Caprice Collins, one of the girls that went on the expedition who did not make it back to civilization.

Right from the start, Virginia finds it difficult to exercise her leadership with Caprice—who it appears has only been included because her parents are financing the mission—as well as some of the other girls in the motley crew of strong characters. As Ebba, the wife of one of the men lost with Franklin, says, she is “absolutely certain she’d misheard” when Virginia “introduced herself as the leader of the expedition.” Much of the book is about how Virginia manages, in spite of her own doubts, to gain the respect of the women and lead a number of the team back to safety.

While the book is engaging and difficult to put down, it is not easy to come to terms with the underlying premise of the novel. In the 1850s, it is unthinkable that a crew of a dozen women would be sent to brave the perils of the great unknown that the Arctic was then, especially in search of an all-male mission that had disappeared without a trace several years earlier.

Some of the other aspects of the book appear to take serious license with historical reality as well—for example, it makes no sense that the ladies go by canoe from Buffalo to Sault Saint Marie with a team of Voyageurs when they could have gathered from far and wide in the latter town—this simply would never have happened even if an all-female expedition could have been constituted.

But The Arctic Fury is historical fiction after all, and one can overlook such artistic freedom in the crafting of a good story. This is what in fact drives the reader to turn the pages right to the bitter end, where Virginia’s secret—her memory of the Very Bad Thing—which readers who know the Franklin saga may have suspected all along—becomes revealed. In a letter written by Lady Jane, we learn that this “thing” is something she may have had in common with her husband, and, in fact, is a key reason why she was chosen to lead the expedition: “Look at the bones. Look at the ship. Look at what the expedition left behind. If you see any evidence that he and his men turned to the solution to which you and your family were driven, never tell.”

Macallister’s writing is powerful, and she concocts a gripping story with strong, very human characterizations, in spite of the license she takes with what realistically might have been possible in that epoch of history. Perhaps in the end, it is also this very flaw that is one of the keys to the book’s success: the transposition of our emancipated times to an era when women were not considered equal to men—either in terms of their capabilities or in their possible roles, makes it interesting beyond the fictional story it tells.

In any case, this is a book well-worth reading.