Dead Doubles: The Extraordinary Worldwide Hunt for One of the Cold War's Most Notorious Spy Rings 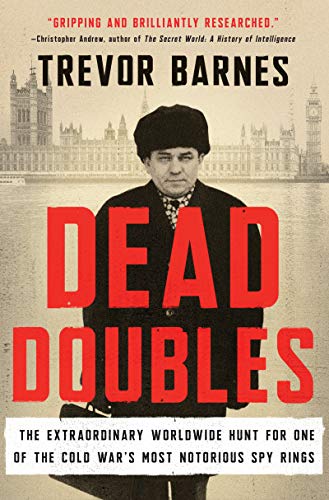 “Anyone interested in Russia’s continuing undermining of the West, espionage, or simply a good thriller read should delve into this book.”

Dead Doubles is a gripping book of historical nonfiction that investigates the difficult task western intelligence services undertook in the early sixties to crack one of the Cold War’s most successful Russian spy rings. While not as notorious in the West as the Cambridge Five, the Portland ring was, in fact, as important if not more so, to the Soviet spy effort.

As Barnes points out, the three Portland iillegals of Molody (alias Gordon Lonsdale), Morris and Helen Cohen (aliases Peter and Helen Kroger) “were certainly among the greatest KGB illegals who operated during and after the Second World War” and along with their British helpers, Harry Houghton and Ethel Ghee, caused untold damage to the West.

This is a book that will take the reader into the world of Russian spies known as “illegals”—which the exciting TV series, The American, was based on —and inside the bowels of MI5 and its highly committed and professional operatives who break the case. It reads like a Graham Greene or Le Carré novel and deserves considerable attention today given the continuing espionage activity in the West by Russia, as well as other nations, such as China.

Trevor Barnes’ meticulous research of MI5 / GCHQ, FBI and KGB files and interviews of former agents in Russia, Great Britain and the USA as well as the families of British intelligence agents allows him to paint a gripping and astounding exposé of the three Russian illegals who, largely with the help of two local Britons, were able to penetrate British Admiralty facilities at Portland where secret work was being done on submarines and sonar systems. They also managed to steal still not fully evaluated secrets from the clandestine Porton Down laboratories, where highly classified biological and chemical weapons were under development.

Just from the Portland base alone, the ring “disclosed to the Russians: in total around 17,000 pages” which “included naval attaché’s codebooks, secret Admiralty Orders, and papers on various sensitive underwater detection and counter-detection devices.” One Russian source claimed that the Portland espionage saved the USSR “about 15 billion US dollars in research costs.” These five spies clearly caused enormous damage to the West’s military establishment in its race against the Communist world.

With several threads of information coming together at MI5—a report marked “Secret” from Special Branch in Dorset, about a man who claimed some files had been from the Portland naval facility, a source in Switzerland offering to send the CIA some highly sensitive material, including the identity of a spy in the British navy—MI5 agents Charles Elwell and David Whyte turn their focus in on Harry Houghton, an employee at the UDE facilities in Portland, who had served previously in the British Embassy in Warsaw, from where, as it turns out, significant secrets were also leaked to the Polish Foreign Ministry and ultimately the Soviets.

Houghton leads the MI5 team to the enigmatic Gordon Lonsdale, a supposed Canadian businessman, who it turns out upon further cross-border investigation with the help of the FBI and CIA, was the Russian plant, Konon Molody. Lonsdale / Molody leads the team to a suburban couple of antique booksellers, Peter and Helen Kroger, who it becomes clear were in reality KGB spies, Morris and Lona Cohen, recruited originally in the US and being actively sought by the FBI for years.

The five spies were finally arrested on January 7, 1961, and initially imprisoned in the UK for between 10 and 25 years. The MI5 operatives tried to make a deal with the Cohens and Molody to ease their sentences in return for information on the extent of their and other KGB activities, but before they are able to extract any meaningful confessions, are maneuvered into spy swaps and fly the three back to Russia. Here all three receive accolades—the Cohens receiving the Order of the Red Banner and Molody being posthumously inducted in the Memory Room of the KGB’s new headquarters at Yasenovo (the only post-Second World War illegal so honored).

In sum, this is a well-researched, well-written account of an extremely important piece of the Cold War that has hitherto not received the airing it deserves. Anyone interested in Russia’s continuing undermining of the West, espionage, or simply a good thriller read should delve into this book.