Such a Pretty Girl 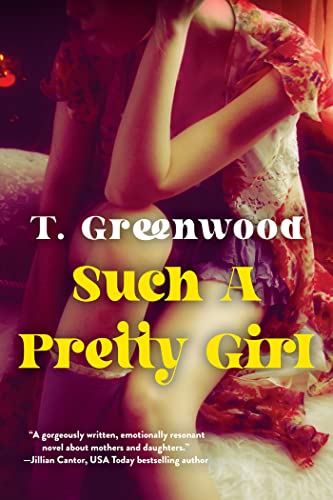 With her provocative, yet tasteful and gripping writing, in Such a Pretty Girl, T. Greenwood tackles the tragic impact on lives of sexual predation in the movie and modeling industries. A three-generation family drama that takes us from rural Vermont to the West Village in New York, and from the everything-goes hippie world of the mid-seventies to the #metoo times of today, it explores the loving but troubled relationship between an over-ambitious mother and her daughter, as well as the healing power of unquestioning, lifelong friendships.

Ensconced in the peaceful world of Vermont, Ryan Flannigan gets a message from her oldest friend, Gilly, the boy she grew up with, who has since come out as gay and is now living in the Big Apple, that a revealing sensual photo of her as a child has surfaced in the New York news media. The photograph, “Blackout, 1977, by Henri Dubois,” was taken by her beloved elder French photographer, former neighbor and friend, at Westbeth, the hippie artists’ colony in the West Village. Fiona, her mother, an aspiring but failed actress had gone there for a photo session in preparation for her many futile auditions and had taken her older-than-her-age-looking, gorgeous daughter with her. A copy of the photograph ended up with Fiona, who sometime later gave it, with a warm inscription written on its back, to a wealthy investor, Zev Brenner, whom she has befriended through an agent, who was always more interested in promoting Ry’s career as a model and actress than hers.

It was Brenner’s money that saved the movie Ryan, in a Lolita-like role, was set to star in. Gilly’s message was prompted by an article in the New York Times that exposed Brenner as a pedophile and a sex trafficker and delved into, and sensationalized, how the photo ended up in Brenner’s possession. The article, asking the question, “Mother or Monster?” demonizes Fiona, and clearly is shocking and hurtful to Ryan who remembers that the words the reporter used to describe her “also felt like bee stings: precocious, preternatural. The face of a woman on a child’s body, the contradiction that launched” her ‘career,’ and in the end, destroyed it.”

This news takes Ry and her teenage daughter, Sasha, back from Lost River, Vermont, to Westbeth, where in the mid-seventies, she and Fiona used to spend extended periods in a communal apartment complex turned artists’ colony that included the photographer Henri and actors such as Guillermo Gilly’s father and the husband of Fiona’s best friend, Liliana. Fiona still lives there, and the return of Ry with her daughter Sasha, forces Ry to confront the dark reality of how, purportedly out of love, her mother has used her.

Along with others in the media and law enforcement, the FBI are investigating Zev Brenner, the wealthy predator pedophile, and after searching Fiona’s quarters at Westbeth, they seek to question her as well. Fiona manages to evade the police and the hordes of paparazzi to seek refuge with a friend in Brooklyn, all the time demanding Ryan’s support and love. It is a question of how far Ry is prepared to go to demonstrate her love for her mother, who clearly has been caught up in criminal activity, using her daughter in what constitutes a felony.

This is not an easy book to read and should be digested in smaller doses. What saves it though is the solid writing, the engaging characters T. Greenwood builds, and the details of the mid-seventies West Village artists’ world she depicts. Despite the difficult topic, it is also unfortunately one that is quite prevalent in today’s media and worth devoting a good read to.