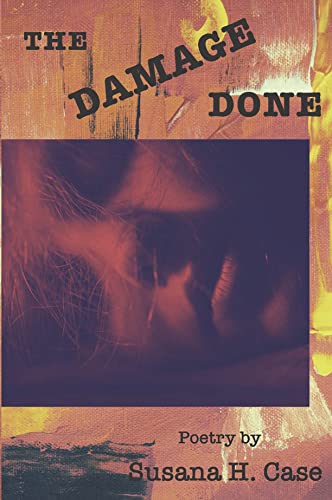 “This is a remarkable little book with a poignant political and social message that should be read by everyone who cares about this country.”

In this wonderful little book, Susana Case explores the potential of one genre—poetry—to deliver a knockout version of another: the thriller, while rendering a poignant sociopolitical message. The story takes place in the late sixties, when J. Edgar Hoover’s FBI was fighting a clandestine war against its own citizens unhappy with the Vietnam War and the perverse acts of a paranoid government.

These were indeed murky times in the USA, and Case makes this point clearly when she states that “Janey . . .”, the beautiful but troubled model who is at the center of the story, “. . . didn’t understand what had gone wrong with the Age of Aquarius.”

The question at the heart of the narrative is how Janey, the Twiggy-like “sorry chick who couldn’t hack the good life . . . with painted-on eyelashes—as if she’s a child’s doll,” met her mysterious end: she was found “recumbent in a car,” dead, by “a tow truck operator, new on the job . . . back from vacation.”

Janey comes from a “stern family” and is shocked by the “cost of clothes,” especially the fancy “newer versions” she gets as “presents from wealthy men with large expectations.” She marries young: “He was a cop.” But the marriage soon goes sour, as the husband finds fault in everything she does, asking the question: “And how does her ass blow up overnight?”

Suicide is raised as a possibility for her death, then her husband, whom “Janey was certain . . . would never, never, never have known her,” comes under suspicion as a local detective gets bogged down in the investigation. But when the medical examiner tells him and the other police working the case to “look past the husband for boyfriends,” and “a cop notes the stiff’s on the Security Index, Priority 3, the Fed’s List,” “the boyfriend in the Panthers” who “helped her make the list” becomes the main suspect.

This drug dealing Black Panther lover—“another Jimi Hendrix look-alike” who “carries Mao’s The Little Red Book to help fuck the girls” is the perfect “righteous revolutionary” for the corrupt agent in Hoover’s Counter Intelligence Program (COINTELPRO) that has taken over the investigation to frame.

Susana Case succeeds in capturing the intense political, social, and generational drama that characterized America in the sixties. The unethical, indeed criminal, antics of the FBI against Americans—supposedly all in an effort to protect the country—are under scrutiny.

Underlying the story is the inherent lack of understanding and mistrust the older generation populating the FBI and security forces in the US, showed toward the student and hippie protest movements. As Case says of the interrogating FBI agent: “And he hates the hippies, like his sister / who lives in some moron commune / in Vermont. He no longer talks to her.” Similarly, the racism that persists in the US to this day comes out loud and clear in lines like “(Witnesses always see a black man.)”

While the story is set in the Age of Aquarius, it is clear through many lines that Case is talking also about today or very recent times. For one, she deplores that “Even the police know that what’s going on is too many people crying / dying.” And in the age of Breonna Taylor, George Floyd and Ahmaud Arbery, the two lines that state “Hey, when you’re a black man, just walking down the street is political stuff,” ring very true indeed. As is the ominous comment, when she talks about Hoover’s FBI—“but this country is sleepy, yawns, allows you to persist.”

This is a book that shocks, bewilders, educates, and makes us wonder about not just the era depicted but also clearly, and very much so, the present we are living in America. The fact that it is written as poetry makes it easy reading, but this only serves to heighten the tragedy unmasked in the story. Every word counts in bringing the message home to the reader. This is a remarkable little book with a poignant political and social message that should be read by everyone who cares about this country.