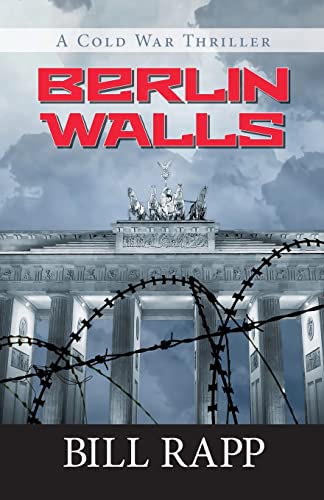 Bill Rapp, a former academic historian turned CIA analyst, diplomat, and senior executive, uses his extensive knowledge of modern European history to craft a brilliant spy thriller that takes place in post-War Europe. The book’s focus is Berlin in the late summer/early fall of 1961, at the time of the construction of the Berlin Wall, the height of the Cold War.

Karl Baier, former agent, now Washington-based CIA executive, is back in Berlin supposedly to help his long time KGB colleague and occasional informant, Sergei Chernov, defect to the West. Baier is certain that Chernov could provide his government with much needed information on Soviet and East German intentions for Berlin and beyond, as well as lead them to other Communist sleeper agents.

The timing for Chernov’s flight could not be worse though, since the East Germans and Soviets have just started to put up the Wall and are daily closing off more of the obvious escape routes. The matter is also complicated by the fact that before he defects, Chernov wants to track down the purported assassin of his brother, who had escaped Russia much earlier and is now thought to be living in Paris. Baier’s personal life also comes into the picture as his wife—whom he had met when stationed in Berlin—asks him to help her parents defect.

Baier follows Chernov first to Paris, then to Rome, then back to Berlin, in pursuit of the Ukranian KGB agent, Marchenko, he believes murdered his brother. What Chernov’s brother was up to in the West and why the KGB sent an assassin to get rid of him is another difficult question that colors the picture.

Along the way, Chernov meets with questionable KGB colleagues—illegal Soviet plants. In each city, the local CIA chief asks Baier, “Do you still trust him?” Even though Baier wonders himself, his answer throughout is a qualified yes—“I have no other option right now.”—as he keeps his eye on the valuable information they would gain on Soviet plans from Chernov, at a time when the opposing sies of the Iron Curtain are edging closer and closer to World War III.

Early on, the East Germans suspect that Baier’s forays into East Berlin are to further his mission to help Chernov defect, and he is confronted on several occasions by the Stasi who try to warn him off with threats and beatings. They assign an operative, Hoehn—a German aristocrat and officer, turned after the war when a prisoner in a gulag in the Donetsk region—to keep an eye on him and to hunt Chernov down in order to prevent the escape. Hoehn follows the two as they make their way through Europe and in several of their confrontations leaves Baier with the hope that he could be turned as well.

The plot thickens and eventually the principals come together in a safe house run by a Soviet illegal in a West Berlin residential area. With some shooting and deaths, Baier is confronted by several surprises, as the world continues to edge closer to World War III.

Bill Rapp builds the suspense masterfully toward the crescendo at the end. His characterizations are powerful, yet very human. This is a spy novel in the tradition of Graham Greene, John LeCarré, and Lee Childs and is difficult not to read in one go. As with books by those authors, the tensions between East and West that stemmed from the deep-seated mistrust and lack of understanding that characterized the Cold War, underpin the novel and keep the story rolling forward. Well done, Mr. Rapp!