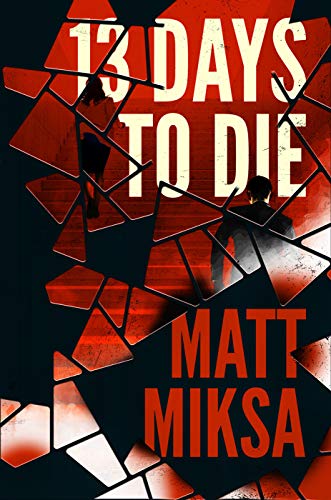 13 Days to Die is a riveting international thriller touching on a threat that is very relevant today: a virus from China, used as a weapon to create a pandemic. And Matt Miksa is the perfect author for this genre of a novel; he is both a former FBI intelligence analyst and a China expert, having lived in Beijing and holding a graduate degree in China studies from Columbia University.

The action takes off with a stranger on his last legs scrambling through a forest in a remote part of Tibet. Infected with the virus and terribly ill, he makes it to a teahouse in Dzongsar Village, where his body literally disintegrates, with blood, vomit and bile spewing everywhere and infecting the locals. One of his last thoughts is, “The HELMSMAN would be pleased.”

When US intelligence finds out about this outbreak, Olen Grave, an agent working with VECTOR, the newly created bioterrorist unit in the bowels of the US intelligence community, is sent by Allyson Cameron, its head and Olen’s former partner in the field, into the hot zone to investigate the goings on in China’ secretive Tibetan Autonomous Region. As Agent Cameron puts it: “This horrific outbreak may have opened a small crack for us to get a peek into one of the most elusive and politically unstable regions of China.”

Tibet is indeed viewed as unstable by the Chinese Politburo and kept on a very short leash. But Olen Grave, disguised as a journalist, is given permission by Chinese President, Li Bingwen—who wants a controlled degree of transparency with the West about the outbreak—to join the Chinese team being sent to Tibet to study and get control of the virus. This is led by a formidable lady virus hunter, Dr. Zhou Weilin, or Jo to her foreign friends; however it is not Li, but General Huang, the head of the PLA and Li’s rival, who orchestrates Olen’s and Jo’s mission. As the reader gradually discovers, the General is playing a much bigger game – in fact he believes that “the sitting emperor lost hos legitimacy and his claim to the throne” and engineers a coup against Li.

At great risk to themselves, Jo and Olen work together to unravel the mystery of Patient Zero: they find out that Chang Yingjie was a spy who infected himself deliberately, and, it would seem he was tasked with sparking unrest in this difficult and alien part of China. But who did the man work for and what was the real reason for this brutal suicidal act?

All the fingers point to Taiwan as the perpetrator of this vile attack, seeking to undermine and weaken mainland Communist China. In fact, the US government receives intelligence from its longtime deep infiltrator in China—Marc Chen, a former colleague of Olen’s—that General Huang will use the growing pandemic to invade and occupy the rogue island.

When US President Bower—also a former intel operative—and his national security team learn of this, there is pressure to launch nuclear weapons in defense of Washington’s ally. But not a moment too soon, Olen and Jo manage to uncover the staggering and completely unforeseeable truth behind the epidemic and the entire string of events, and in the process, they get to the bottom of a global conspiracy, and come close to discovering the true identity of the HELMSMAN. And he or she could be anyone!

The thriller is well-written, taut and full of action, twists and turns, with frequent changes of venue. Characterizations are good, and the potential horror of a viral epidemic is described in searing detail. The global events depicted are not far from reality, so the imagination of the reader is not stretched. A book that should be read by lovers of thrillers and current events. May anything like this not come to pass!