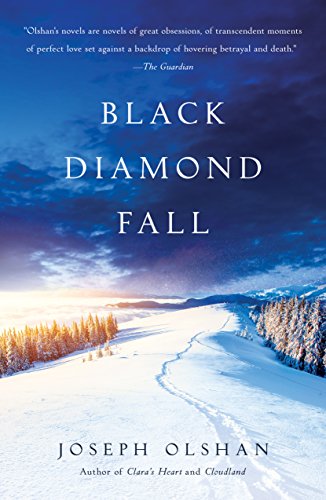 Joseph Olshan succeeds in crafting an enthralling mystery set in snowy Vermont, at the center of which is the disappearance during winter break of Luc Flanders, a student at Carleton College (really Middlebury College) and his love affair with the athletic, 49-year old Sam Solomon, a successful architect living alone near South Woodstock.

After a game of hockey with his roommates on a frozen pond, Luc realizes that he has lost a ring given to him by Sam and goes back to look for it. The last to set eyes on him are his roommates and a former girlfriend, Elizabeth, who comes to the pond bearing information that the Robert Frost farm, where his mother is docent, has been broken into and trashed, with several valuable books stolen.

Sam, who is heartbroken over the breakup with Luc, goes to Utah with his best buddy, Mike, to ski the supremely difficult off-piste Black Diamond Fall. He has a bad accident, breaking a leg and ending up in hospital. Mike suspects that there may have been a deathwish driving Sam’s failure to make it down the Fall but since he is alive this recedes to the background.

Back in Vermont, with Luc not seen for several days, the college brings in local detectives, Nick Jenkins and Helen Kennedy, to try and solve the mystery of Luc’s disappearance. Once before, after a severe head accident, Luc had gone AWOL, so plausible questions are raised whether this is indeed what may have happened this time as well.

After Jenkins’ wife, Connie, a medical researcher at the University of Vermont, shows him a You Tube video of a Swedish man who has a car accident and survives for a wintry month at the bottom of a ravine in a “twilight state” with breathing and heart rate slowed, he wonders whether this might have been Luc’s fate.

But as the two Carleton detectives delve into the case, they find reasons to suspect not only Sam—who cannot provide an alibi for his whereabouts immediately after Luc disappeared—but also Elizabeth and Luc’s two roommates (one of whom has a history of violence), as well as the twin steroid-using body builders, Howard and Mark Newcombe, who are the main suspects in the trashing of the Frost farm.

In this fast-paced story line, Jenkins meticulously unravels the mystery of what really did happen to Luc. The book culminates with a surprising finish.

Olshan’s characters are well constructed and very human. Luc’s ambivalent sexuality—a probable outgrowth of his difficult relationship with a demanding alcoholic father and an important component in the development of this unstable young man—is well portrayed:

“Walking along the cold, empty lanes of the college, he remembers the last time he made love to Elizabeth, the incorporeal sensation of looking down on his own body, on his ass pumping mechanically and joylessly. He went soft inside her, the first time he went soft inside a woman, and they’d had to stop, and he’d made excuses for it, said he wasn’t feeling well.”

Olshan also succeeds in capturing the mysterious, almost eerie atmosphere of wintry Vermont; in this regard, his inclusion of a weather report in his chapter headings is particularly effective.

All in all, this is a well-written, imaginatively construed mystery set in a wonderfully conjured up wintry Vermont college town. A thoroughly enjoyable five-star read.