A Spy in the Struggle 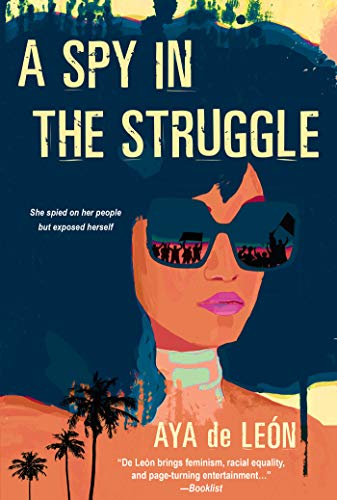 “The writing is strong, the dialogue is realistic, and her characters are well depicted and believable. It is refreshing to read a well-written book that embraces important objectives that we all need to focus on . . .”

This is the fourth book in Aya de León’s Justice Hustlers series of novels that are set against the background of big picture ills in our world such as climate change, corporate corruption, racial and gender discrimination, and unwarranted government intrusion into the lives of private citizens.

Yolanda Vance, a Harvard trained, prep school educated African American lawyer, in her first job as a corporate lawyer, is stunned when her prestigious New York firm is raided by the FBI. When asked by her boss to shred some incriminating documents, she decides rather to turn them over to the investigators. Out of a job, the fact that she was the whistleblower helps her find employment with the FBI, and she is assigned to an investigation of Red, Black and Green (RBG), a Bay area group of mostly black and immigrant activists back in Holloway, California, where she had attended Cartwright College. RBG are seen by the authorities as an extremist group protesting among other societal ills against the rampant polluting activities of Randell Corporation, a biochemical concern that operates in the town.

The FBI sets up Yolanda with an apartment in a dodgy part of town, and on her first outing to jog around the Cartwright College campus she finds herself in an inadvertent race with a handsome athletic runner who barely pips her at the post and after the run comes over to introduce himself and challenge her to a rematch. This is Olujimi Thompson, and he turns out to be a professor at the college and also an active member of RBG. It is immediately evident that there is mutual attraction between the two and Yolanda resolves to beat him at the rematch.

Yolanda is welcomed into the RBG family and indeed is asked to tutor some of the younger members. At the meetings, societal inequities and the polluting activities of Randell Corporation are the main topics of discussion. One of the early such occasions features Mrs. Dorothea Jenkins, whose granddaughter, Anitra—who was working at Randell—is found dead in an alley outside a downtown bar.

Police claim she died from a drug overdose, but the Jenkins family is convinced that she was bumped off by Randell. They get a court order to exhume Anitra’s body, but when the top of her coffin is lifted and her corpse is not there, suspicions of foul play seem to be confirmed.

Upon further investigation, led by intrepid local policeman Rodriguez, one of the Latino gravediggers questioned implicates Andrew Wentworth, the wealthy CEO of Randell. All along, Yolanda’s reports on RBG activities seem to filter through to the police and she becomes convinced that her FBI bosses are in cahoots with Randell because of some important government contracts. She comes to the realization that the stakes are escalating and there may be a point where she may need to choose between her career on the one hand and her newfound love for Olujimi and supporting her downtrodden people on the other.

De León weaves a gripping plot line that does not suffer for lack of verisimilitude, to the point that it is hard not to feel that one is there fighting with her heroine for the causes of social and environmental justice. The writing is strong, the dialogue is realistic, and her characters are well depicted and believable. It is refreshing to read a well-written book that embraces important objectives that we all need to focus on without being preachy and overbearing.