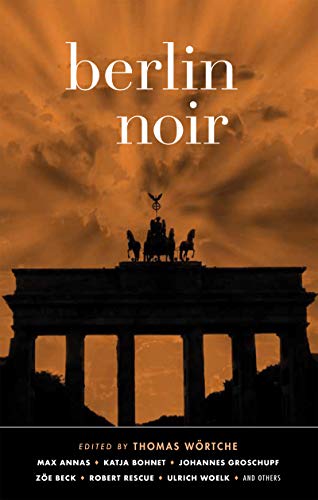 “definitely a book that should be on the list of all noir lovers.”

The 13 stories included in this latest release in Akashic Books’ excellent “Noir” series are true to the genre in every sense of the word. Berlin, probably more than any other city in the world, is historically the capital of noir, harking back to the troubled, decadent era of the Weimar Republic and continuing through its dark heyday as the Nazi capital, followed by its schizophrenic life as a divided city.

But while they revel in that tradition, what Thomas Wörtche and the selected authors present in the 13 stories is a modern version of noir set in the era since the fall of the Wall. And the selection works wonderfully together: each tale explores a different part of the German capital, with different histories, ethnicities, characteristics, such that the picture that we are left with is one of an exciting but troubled city which very much has a life of its own.

In many of the stories,  Berlin’s history and especially the darkness of the Nazi and Soviet eras are felt, if not present directly as a part of the story. One which puts the heroic Berlin Airlift at tits very center, is Robert Alef’s “Dog Tag Afternoon.” In this suspenseful story, one of the pilots of the airlift, Bill Munro, now 96 years old, who has come back for the opening of a special exhibition at Tempelhof Airport honoring the airlift, is found inexplicably murdered.

Through twists and turns, we discover that the murderess was the daughter of someone Munro was in love with, and whose husband he had killed out of jealousy during the airlift. Along the way we find out the surprising fact that “The Russians allowed the Allies to transport coal”—the life-saving fuel flown in by the airlift—“through East Berlin . . . The coal was transported from west to the west.”

Although all the stories are somewhat quirky, interesting and fun, the one that stands out is Johannes Groschupf’s “Heinrichplatz Blues.” The first line says it all: “The nights in Heinrichplatz are not the same as they were when Nick was around.” The voice is the collective “we”—a group of women who miss the “king of the neighborhood” stud Nick—who “is irresistible, we all agree on that.”

The “we” narrator takes us around Heinrichplatz to all the hot bars, cafés and nightspots, indeed in a wider circle, introducing us to all his lovers. “By the way, we’re not in love with Nick, God forbid. Not a single one of us. Not really, anyway. It’s more a matter of hormones. We’re just following the call of nature. We share Nick between us, making arrangements without him noticing.”

However, as the first line suggests, Nick has gone missing and the covey of lovelies is despondent, remembering him though with fondness and nostalgia. The last line, “In the Bateau, one of us has written his name on the wall of the ladies’ bathroom. And the dot over the i is heart-shaped” captures it all.

That could also be the covey of authors Wörtche has assembled talking about Berlin in this little book, a Berlin that has a noir past, a noir present and a noir future—always changing but still noir. They love it and miss it even as they tell these stories.

The 13 tales are well chosen and the collection skillfully put together by Wörtche, who also writes an Introduction that ably sets the stage for Berlin Noir. The translation of all the stories (except for “Kaddish for Lazar” by Michael Wuliger, which was written in English) by Lucy Jones is exemplary and seamless.

This is definitely a book that should be on the list of all noir lovers.