Tell Your Children: The Truth About Marijuana, Mental Illness, and Violence 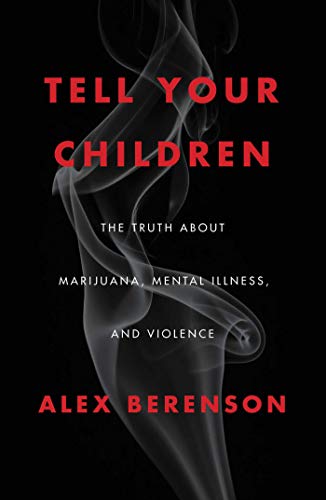 “Marijuana dependency is a real thing, and this book uses big data to highlight the shocking fact that ‘every day in 2014 almost 250 people showed up at emergency rooms all over the United States with psychosis and marijuana dependency.’”

Marijuana is harmless. Marijuana is better and safer for you than alcohol. Marijuana holds the answer to America’s opioid addiction. In the words of comedian Katt Williams, marijuana has “‘the side effects—hungry, happy, sleepy. That’s it.’”

That last unpleasant truth underpins former New York Times journalist Alex Berenson’s argument in Tell Your Children. This book exposes the marijuana racket in the United States and Canada as being built on half-truths and outright lies.

For starters, Berenson, who cannot be cast aside as an old codger or out-of-touch drug warrior, uses the latest scientific research to prove that today’s marijuana, with its higher concentration of THC, is responsible for an upsurge in schizophrenic breakdowns and bipolar episodes. Marijuana dependency is a real thing, and this book uses big data to highlight the shocking fact that “every day in 2014 almost 250 people showed up at emergency rooms all over the United States with psychosis and marijuana dependency.”

The root cause of this is indubitably higher concentrations of THC, which is what gives marijuana its “high.” THC may inflame the brain and increase neurotoxins to unstable levels. In people with dormant schizophrenia, habitual intake of THC is a recipe for disaster. The same may be true for those who have never had a psychotic episode or experienced mental health issues.

Tell Your Children will likely be seen by legalization supporters as Reefer Madness repackaged in a less pulpy gloss. They would be wrong, of course. Berenson’s book is a revelation that debunks most of the myths that far too many Americans have imbedded about ganja.

Berenson notes that the first four states that legalized marijuana (Alaska, Oregon, Colorado, and Washington), have “seen their rates of murder and aggravated assault increase much faster than the United States’ rate as a whole since legalization.” More to the point, Berenson’s study of forensic autopsies elucidates the fact that a sizable portion (if not an outright majority) of violent criminals in the U.S. committed their crimes while high on nothing more than THC.

Sadly, Tell Your Children has all the markings of a book destined to fall on deaf ears. The marijuana industry and its legalization efforts are backed by big money, with Hungarian multi-billionaire George Soros being one of the biggest bankrollers. Pro-weed advocates also have people like Senator Cory Booker (D-NJ) openly spouting off incorrect information about the harmlessness of marijuana, and because such politicians are media darlings, they never get called on the carpet.

Tell Your Children may become unpopular and despised, but Berenson can at least take comfort in telling the truth. Higher-than-average marijuana use, along with a higher propensity to develop schizophrenia, is the reason why African Americans are arrested for drug offenses at higher rates, not because of the bogeyman called racism. (Indeed, heavy marijuana use may be the reason why African Americans develop schizophrenia at higher rates than whites and other racial groups.)

Marijuana use can be connected to violent crimes, and America’s overall rise in violent crime since 2014 is commiserate with the rising use of marijuana. Despite what the smart set says, marijuana is indeed a “gateway drug,” with heavy marijuana users more likely to develop addictions to opioids and heroin.

Tell Your Children may just be the most important public policy book of the 21st century.