Yours Truly: An Obituary Writer's Guide to Telling Your Story 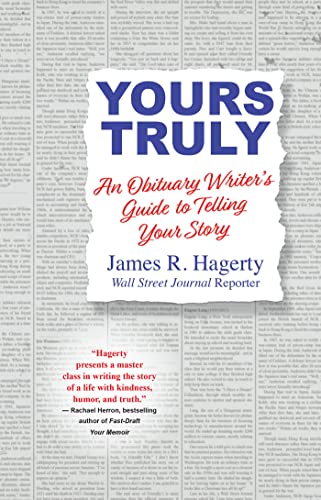 “My husband of 26 years just died and, ironically, I am reviewing a book about writing obituaries by James Hagerty, the long-time obituary writer for The Wall Street Journal.”

My husband of 26 years just died and, ironically, I am reviewing a book about writing obituaries by James Hagerty, long-time obituary writer for The Wall Street Journal, and famous for writing about interesting people who weren’t famous at all.

In response to some 450 death notices as well as more sent via Facebook and LinkedIn, I received numerous condolences that told me how “moved” and “heartened” the writer was by my tribute.

Why this reaction? I hardly had to wonder because I wrote highly specific details of Stephen’s life. For example, “Born profoundly hard of hearing and taunted relentlessly for it during his youth (even his parents assumed he was retarded), he overcame the mockery to earn degrees in anthropology, economics, and nursing. He worked in emergency medical rescue and became Chairman of the DC Mayor's Committee on Persons with Disabilities. He was a champion of the marginalized and misunderstood.”

In the 1980s Gorman served as an AIDS buddy and subsequently had enormous experience assisting the dying. “The best way to die,” he said, “is in the room of your choice, surrounded by the people of your choice, holding the hand of your choice.”

By contrast an obituary that reads like a resumé—he went to school here, worked there, got this award, married so-and-so—is as boring as it is uninformative. It is, in Hagerty’s words, “solemn and dull,” and thus deadly. Mere chronicling is equally deadly in nonfiction because it has no driving force to move the story of a life, or a character, forward.

Hagerty shares these pointers and many others. His aim as an obituary writer’s guide is “telling your story.” It isn’t as onerous as many might think. In fact Hagerty makes it easy by breaking it down to simple questions:

What were you trying to do with your life?

And how did that work out?

He advises readers on what and what not to include, and how to unearth telling details that enliven and illuminate. “Some things are not very important but should be included because they are peculiar.”

He cringes at clichés and euphemisms that say someone passed, transitioned, or moved on to a better place rather than saying they had simply died. Everyone loves their spouses, children, and grandchildren, but it is much more interesting to read about people who loathed their families. Hagerty’s point is that to be flawed is also to be human. Obits are all the richer when they own up to at least some fault of the deceased.

How much more gratifying it is to read of someone who found meaning in their lives by “helping others endure and rise above their miseries.” Hagerty’s main point is to show that “we are the biggest beneficiaries of our own kindness.”

As for writing your own obituary in advance, he says, “No one can do it better.” Friends or relatives who make a stab at it once you are gone are guaranteed to leave out the most telling parts or simply resort to cliché. If you aren’t comfortable with writing, Hagerty offers guidance on how to record an oral history in short sittings.