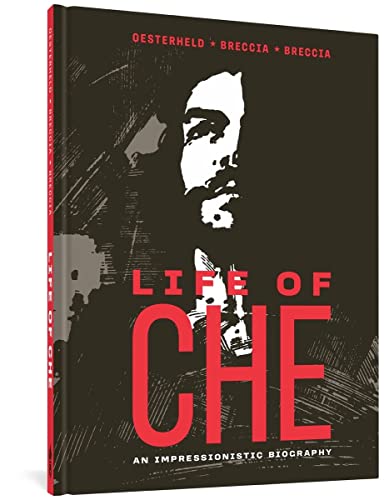 The story of this book is almost as extraordinary as the story of Che Guevara’s life. As told in the afterword by Pablo Turnes, Vida del Che was first published in January 1969, two years after Guevara’s death, by Argentinian publisher Jorge Álvarez. At the time, Argentina was ruled by a military junta, so publishing a biography of a revolutionary in the form of a graphic novel was in itself a revolutionary act.

To secure the safety of everyone involved, Álvarez released the book under a fictional imprint called Ediko and offered to remove the author’s and artists’ names from the cover. The writer, Héctor Germán Oesterheld, courageously left his name on the jacket (and would later be “disappeared” by the government in 1977 at the age of 58). The book sold out.

In 1973, the military junta raided the publisher’s offices and destroyed all evidence of Vida del Che’s existence. It wasn’t until 1987 that the book was salvaged, in Spain, from a printed copy. Clandestine editions and translations followed (this reviewer picked up a copy in Portuguese from a Lisbon street market in 2019), but never in English until now.

As the subtitle states, Life of Che tells Guevara’s story impressionistically. The text is a mixture of newspaper clippings, diary entries, invented dialogue, and literary flourishes. The key episodes of Che’s life—his childhood, his motorbike trip across Latin America with Alberto Granado, meeting Fidel Castro in Mexico, and scenes from the Cuban Revolution and its aftermath—are interspersed with his fateful (and fatal) campaign in Bolivia. The narrative switches between first and third person.

Memorable lines abound. The motorbike trip—Che’s revolutionary awakening when he was still a medical student—concludes with “The diseases he really wants to cure aren’t typhus, malaria, leprosy, but hunger, exploitation, injustice.”

There’s also a healthy dose of wit in this telling. After the Cuban revolution, we are treated to the irony of Che, a man who cared nothing for money, being named Director of the National Bank of Cuba. He’s depicted showing up to work in his fatigues, a machine gun at his side. He signs documents “Che.”

The abiding tone of the book, however, is pathos. Once Che realizes that “those who reduced everything to economics were wrong . . . [t]he true revolution can only occur within the heart,” he decides to take up arms again and writes a moving farewell note to his children. In it, he refers to himself in the past tense: “Your father was a man who acted upon his beliefs” and exhorts his children to “be always able to feel in your depths any injustice committed in any part of the world. It’s the most beautiful quality of a revolutionary.”

From here on, the story has a trajectory as fixed and inevitable as a Greek tragedy. We know, and he knows, he’s doomed. Toward the end, as he regards his sleeping comrades-in-arms, he notes, “A life given for something is never lost.” But the cartoon panels grow darker, and the text dwindles until words slip away altogether.

While the storytelling is impressionistic, the artwork, by father and son Alberto and Enrique Breccia, is pure expressionism. Black ink sprawls across white backgrounds; silhouettes and shadows recur; and Che’s iconic features emerge from tangled roots and bunkers. Ink spatters conjure spilled blood.

The use of woodcuts, too, chimes perfectly with its subject matter. The technique, associated with early 20th century leftist artists—socialists and anarchists—lends a purity of form, almost abstract in its blocky simplicity, to the episodes on the battlegrounds of Bolivia.

The final three pages of Life of Che are extraordinary. They unfurl like a roll of film, gradually zooming in on the murdered Che’s visage, crosshatched like scars, with a bullet hole above his right eye. That visage stares back at its viewers, daring them to take up his unfinished revolutionary mission.