I Will Never Get a Star on Mrs. Benson’s Blackboard 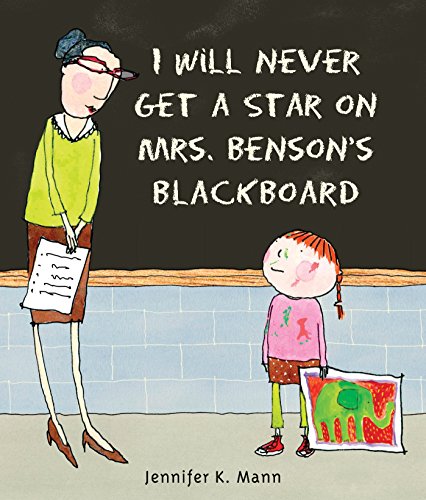 As an author of picture books and a longtime teacher, this reviewer approached I Will Never Get a Star on Mrs. Benson’s Blackboard with both interest and trepidation. Interest because, based on the author-illustrator’s first book (Two Speckled Eggs), Jennifer K. Mann seems to be a champion for fringe-dwelling oddballs. Trepidation, because the title suggests her second effort might be another wearisome attack on evil teachers for murdering the fragile souls of “creative” children by making them color inside the lines.

We are introduced to rosy-cheeked little Rose, drawn with wavy ink lines, as she is gazing out of the classroom window while her peers eagerly raise their hands. She tells us that Mrs. Benson’s stars are given for “stuff like spelling or neatness or raising your hand and saying the right answer. Not for doodling or daydreaming.” And it seems certain, at least to the beleaguered educator, that what is coming is an attack on obsessive neatness and teacher-pleasing—maybe even against the oppressive concept of “right” answers.

Rosie really wants a star, but she bungles her math problem by not listening to the instructions well enough, nor can she read aloud with star-worthy oomph. Worst of all, her musing about a visiting artist causes her to spill the snack tray all over Mrs. Benson’s desk. And speaking of desks, Rose literally gets sick to her stomach as Mrs. Benson starts ominously inspecting them for neatness. Hers is last, and of course the messiest in the room.

But here is where the book takes a surprising turn. Rose is saved by the bell, but also by Mrs. Benson’s unexpectedly compassionate attitude. “Close call, huh, Rosey?” she says, flashing a wry smile. “I’ll look at yours tomorrow.” Rose stands at her dump of a desk looking directly at the reader here, as if to say, “How do you like that?”

Invigorated by her second chance, Rose shows up early the next day to clean up, but winds up with an even bigger mess after making a thank-you note for the visiting artist. Fortunately, Mrs. Benson only laughs good-naturedly at Rose’s predicament and then shows off her card, proclaiming her to be a “true artist.” Rose gets a third chance to clean her desk, and she finally gets the job done, after which she is called up to the board and allowed to draw a star by her name.

The book does not end there, though. The final page reads, “Finally! I got a star on Mrs. Benson’s blackboard—and so did she!” We see Mrs. Benson’s name added below Rose’s with a special giant star, presumably added by Rose herself.

It’s interesting that the book ends focused on Mrs. Benson’s reward because, in fact, I Will Never Get a Star on Mrs. Benson’s Blackboard seems, at its heart, to be more about her than Rose. The book turns out to be a subtle case study for teachers on how to handle daydreamers and doodlers—with patience and sensitivity. There are certainly many like Rose, students who may be appear not to care but who are in fact trying, sometimes desperately, to succeed.

This book definitely gets a star on my blackboard. But as an author I am less certain of what it offers to young readers. Surely they will identify with Rose to the extent that they sometimes find themselves in similar situations, but is that enough for them to award Jennifer K. Mann a star on their blackboard?

She will have to sit at her desk (neat or not) and wait patiently (or not) to find out.