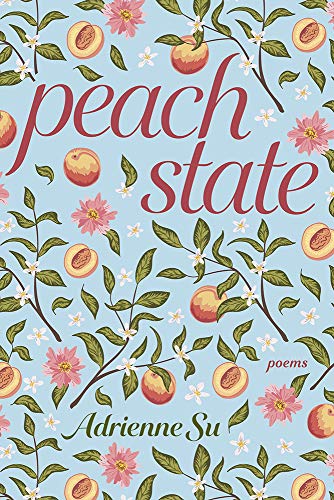 There are two books folded inside one another in Adrienne Su’s Peach State. One is a cookbook. The other is a photo album. Neither has recipes. Neither has images.

Everyone has a memory placed in the apse of themselves, lit from above, highlighted for all: a place where one is always a child, for instance, walking home from school, smelling from a block away the sweet, round scent of his grandmother cooking tomato sauce over a huge stovetop pot, a cigarette bobbing up and down between her lips like a waitress at a truck stop. She’s stirring the pot, and all he can smell is the surprise:  He didn’t know she was to visit from Italy, but even from a block away he can tell, by the aroma, that somehow she’s here. He breaks into a dash, and even 30 years later is still running, can still smell the tomatoes bubbling in the pot, the burnt stinging smell of a Marlboro Lights curling around his childhood kitchen, even though he’s supposed to be here, and now, at his grown-up desk writing a book review.

It’s not what they meant when they coined the term, but yes, yes, you are what you eat.

Adrienne Su and her poems on the American immigrant experience (redundancy if ever there was one) have done here what they always come to do: remind that the Great American Immigrant is much like the Great American Songbook: you can hear the song again and again and realize that each time it’s something new. That it’s not the song but the singer. That how you hear it changes the way it sounds. That they . . . are you.

Peach State revolves around the dinner table, the kitchen table, Ms. Su’s table, your table—memories of food and family and the places where they all come together. We are what we eat because our food literally becomes us, but also because the palace of our lives is full of halls scented with memory, with taste. Adrienne Su, American poet, provides helpful reminders to that memory: “When I Said I Grew Up Speaking No Chinese, I Was Forgetting These Words,” she titles one poem, before detailing the cha shao made by her mother’s hand, the dim-sum, unavailable to her in her Atlanta childhood but still translatable in poetic rebirth: “a little bit of heart, decimal-point heart, a touch of heart,” or the longyan fruit that grows wild in Asia but turns up in Dixie sold only in cans.

The work here captures all the stages of human life, but also the stages of adaptation, immersion, sacrifice, conquest that the Chinese kitchen, like many immigrant domains, has taken in its journey through American experience—a world of baozi and instant ramen, the substitution of Del Monte corn and Swanson chicken for the real deal, to hide the compromise necessary in all such worlds: “in winter, be a Chinese American / from nineteen seventy seven./ in summer, check out the garden.”

Yes, for all people adaptation and evolution occurs, cuisines adapt, ingredients change. But still some things remain the same: “the lazy Susan, in antiquity, would have been a fire,” she points out, but that in spite of all of the similarities they can never be the same: the title “Not Your Grandmother’s Sunday Dinner” is responded to with only My grandmother’s Sunday dinner. It is the singer, not the song. A memory palace can have only one occupant.

The work is at times playful, poking fun, for instance, at the mythos of the Chinese experience in America: the poem “Name That Restaurant” features four columns of cliched, hackneyed words often used in the sobriquets for suburban take-out restaurants. That said, it is primarily comic relief to step back from the mournful sounds of a radio in a home one can never go back to, but whose radio is portable enough.

“Chinese Restaurant Syndrome” would like to remind you that “children, awaiting dumplings, will never know their grandparents,” or taste your grandmother’s roast pork, and the new meaning of “your children growing up, seeking their fortunes.” It would also like to know, and will tell you gently, that you’ll never be walking home from school again, that you’ll never smell the gurgling tomato sauce from a block away, that the curls of cigarette smoke will never choke you at the doorway, and that no matter how long you might sit at your desk trying to find them, they will only infiltrate your dreams, from which you will wake in the only home you know.

This is a lovely book.