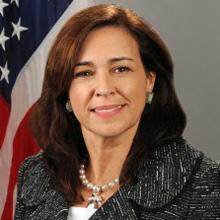 Tara D. Sonenshine is a former undersecretary of state for public diplomacy and public affairs. From 2009 to 2012 she served as Executive Vice-President at the U.S. Institute for Peace.

Ms. Sonenshine has served in various capacities in the White House including transition director of the national security council. She is a journalist by training and winner of 10 News Emmy Awards for national and international coverage during her tenure at ABC NEWS.

She has also been a contributing editor at Newsweek and author of multiple articles about domestic and foreign policy.

Ms. Sonenshine has advised numerous non-profit organizations on gender diversity and communications strategy and she is currently affiliated with World Learning, a global organization working on international development and education.

An avid reader and commentator, whose literary reviews have appeared in the Huffington Post and other media outlets, Ms. Sonenshine is also a Distinguished Fellow at George Washington University's School of Media and Public Affairs where she works with Planet Forward, a consortium of schools addressing sustainability.

On the Road in Trump’s America: A Journey Into the Heart of a Divided Nation

Americans have stopped listening—to each other and to their institutions.

The Case For Impeaching Trump

“Holtzman is courageous in writing this book. It certainly won’t win her a White House invitation to the Christmas Party.

Smarter Faster Better: The Secrets of Being Productive in Life and Business

In a world obsessed with productivity, it is timely to read a book that tells us who is likely to be productive and why.

The Industries of the Future

“Alec Ross answers the clarion call for innovators who can imagine tomorrow today.”

The Dogs of Littlefield

You don’t have to be a dog lover to love books about dogs—especially when the book is well written and has a good plot.

“If you want to understand the rise and evolution of Hezbollah . . . this is a good place to start.”

The New Threat: The Past, Present, and Future of Islamic Militancy

“A good primer on Islamic militancy for anyone who lives anywhere in the world today.”

Socrates and Rabbi Jonathan Sacks would have gotten along famously. They both love to ask hard questions. They are teachers and scholars ruminating about cosmic issues.

A Dictionary of Mutual Understanding: A Novel

“Painful, powerful, and full of historical data about life in Nagasaki after the bombs fell.”

The Further Adventures of Ebenezer Scrooge

“We could all use a little more Christmas in our day.”

Islam and the Future of Tolerance: A Dialogue

“This book may not change hearts or minds, but it will provoke thought and discussion—and that is a contribution.”

The Secret Chord: A Novel

King David comes alive in a deeply emotional “novel” that tackles the man and the myth in an ambitious sweep of history and lore.

Did You Ever Have A Family

“The uplifting themes of this novel are around forgiveness, community, and compassion, although they are eclipsed and outweighed by heartbreak.”

Between the World and Me

In a Dark, Dark Wood: A Novel

WARNING:  This book is hot. Do not pick it up late at night or if you are in a dark, dark wood.

I Saw a Man: A Novel

Grief. It is a freighted word—laden with the weight of sorrow and loss. Grief. It is a universal emotion yet so individually experienced and expressed.

Among the Ten Thousand Things: A Novel

“Among the Ten Thousand Things is praise-worthy. Stunningly written . . .”

A Cure for Suicide: A Novel

Re Jane: A Novel

In a nation of immigrants, at a time when immigration is the hot topic, it is refreshing to read a novel in which hyphenated Americans have a chance, without political scrutiny, to express the tug

All the Old Knives

A good yarn often happens over a good meal. With the right food and a glass of fine wine, people talk.

There is nothing little about this book including its emotional impact.

Our Souls at Night is a peaceful gem of a story.

In the Unlikely Event

Ask adults or adolescents what they know about Judy Blume and many will say Fudge. Blume’s Fudge series remains a classic although it was just one part of her 28 titles spanning four decad

“The Green Road would make a great movie—long, painful, and strangely uplifting.”

“If you are looking for a Thomas Hardy-like adventure story with profanity, pornography, and passion, you will find it . . .”

This is not a harmless story.

To read A Small Indiscretion is to eat fudge before dinner: slightly decadent behavior, highly caloric, and extremely satisfying.

“For those who like history and drama, there is plenty of both in this novel, with good plot twists and turns.”

A History of Loneliness

“I simply wanted to be left alone.” Those words are spoken by Father Odran Yates, the main character and narrator in John Boyne’s novel, A History of Loneliness.

“Never doubt that a small group of thoughtful, committed citizens can change the world; indeed, it's the only thing that ever has,” said Margaret Meade, the great anthropologist.

For months he stood over me—a lone soldier in a silhouette.