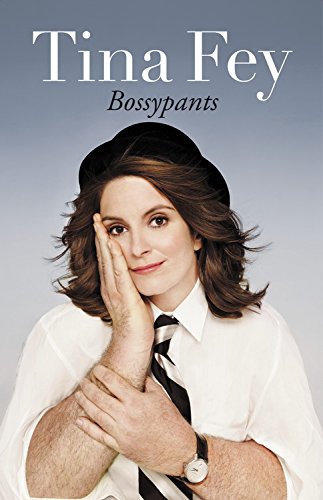 After passing the rigorous entrance exams and arriving at the fabled campus of the world-famous New York Academy of Reviewers, located in the heart of United Nations Plaza, excited new student reviewers are appropriately hushed as they, pencil boxes in hand, enter Addison DeWitt Hall, walk through the marble rotunda and enter Classroom A, the first door on the left down the long, long echoing hallway, as the portraits of master reviewers—Dorothy Parker, Pauline Kael, James Agee, and Rex Reed among them—stare down at them with eyes that seem both to pierce and move.

Here, the very first thing young and attentive new student book reviewers are taught is to never judge a book by its cover. In fact, being caught judging a book by its cover can result in severe punishment, even expulsion from the famous NYAR itself.

However, the temptation to judge Tina Fey’s new book Bossypants by its cover is just too great. Because it’s a doozy.

Bossypants’s cover image is that of an endomorphic manly man, ham-handed, hairy armed, in white business shirt and black and white Lou Grant tie, an Oliver Hardy hat up on top, with Tina Fey’s gentle face in between, nestled onto Gandolfini shoulders. It is at once an homage to classic comedy and feminist trope.

Which is pretty much what you get inside the book as well, right from page one:

“If you are a woman and you bought this book for practical tips on how to make it in a male-dominated workplace, here they are. No pigtails, no tube tops. Cry sparingly.”

(Note that she does not tell her readers not to cry, but to be a little strategic about the when and how of it, as she writes, “I say, if you’re so mad you could just cry, then cry. It terrifies everyone.”)

Just as the cover promises, Bossypants is less tell-all than a tell-how; in this case, Tina Fey tells how each of us is capable of finding the authority figure within to, first, allow one’s self to be the person we want to be, and, second, should God will it, to become an appropriate authority figure in the lives of those around us—our children, our employees, our vendors—without becoming that most difficult of creatures, a “bossypants.” And, remarkably, she does this without the virtue of ten “easy to follow” steps or a special diet.

As Fey puts it: “Since I became an executive producer of ‘30 Rock,’ people have asked me, ‘Is it hard for you, being the boss?’ and ‘Is it uncomfortable for you to be the person in charge?’ You know, in the same way they say, ‘Gosh, Mr. Trump, is it awkward for you to be boss of all these people?’”

In answering any or all of these questions, Ms. Fey offers a selection of individual essays that, all together, form something of a memoir, something of that “book of practical tips on how to make it in a male-dominated workplace” that was expected of her, and, best of all, a comic monologue on a par with Ms. Fey’s “SNL” best rant, in which she (with the help of her makeup artist Richard Dean, who is credited with actually coining the phrase) extolled Hillary Clinton’s strength and leadership by declaring that “bitch is the new black.”

It is as if someone has, smartly, taken advantage of Ms. Fey’s background in improvisational comedy and said to her, “You’re a little girl with brown hair and a long nose and you live in a small town in Pennsylvania but you dream of someday creating and being in charge of the funniest show on television: Go!” And Bossypants is the result.

Along the way, we get some intimate details:

On her own sexuality: “If I’m honest with myself, I can admit that I’ve known this ever since I saw Larry Wilcox ride a motorcycle—on the back of a flatbed camera truck—down the Pacific Coast Highway. I like white boys.”

On her early attempt to wear contact lenses on TV: “Right up until camera time, I was sweaty and green from having to touch my own eyeballs like that. If you’ve never had to do it, I’d say it’s not quite as queasy-making as when you lose your tampon string, but equally queasish to a self-breast exam. If you are male, I would liken it to touching your own eyeball, and thank you for buying this book.”

On meeting Sarah Palin: “She offered her daughter Bristol to babysit [Ms. Fey’s daughter] Alice during the show if need be. I thanked her, saying Alice was too little to stay for the show. She always went home with her dad after the dinner break. I can’t imagine Bristol would have been too psyched to do that anyway; it was her eighteenth birthday, she was in New York City, and I had made a vicious joke about her a week earlier. But I appreciated the mom-ness of Mrs. Palin’s offer. She might as well have said, ‘You guys need to take these sets down tonight? Cuz I can get Todd down here with a Makita.’”

On advising Monica Lewinsky: “I taught Monica Lewinsky everything she knows . . . about eye cream. I guess I should back up and explain that. In the spring of 1999, I participated in a secret meeting with Monica Lewinsky, ‘SNL’ producer Marci Klein, and fellow SNL writer Paula Pell. . . . This was before Ms. Lewinsky’s infamous Barbara Walters interview aired. None of us had ever heard her speak before. She was still the enigmatic girl in the beret who didn’t get to the dry cleaners very often. . . . Monica was bright and personable and very open with us—maybe too open for a person in her situation. . . . We talked about things. Weight Watchers, and Brazilian bikini waxes. . . . When the topic turned to eye cream, I wanted to talk, so I shared the one piece of information I’d retained from the mean woman at the La Mer counter in Saks. ‘You’re supposed to gently pat it on with your ring finger.’ I demonstrated. ‘Oh, really?” Monica asked with a level of interest and gullibility that explained a lot. To this day, I think of Monica whenever I apply my eye cream. And I’m sure she thinks of me.”

It is when Tina Fey writes on the topic of motherhood that she is at her best. When she explores the cost of “having it all:” “I would think of Midge’s little fingers in the middle of a busy workday. I would tell myself, ‘Once I have the baby full-time to myself, everything will be easier.’ And then it hit me; that day was not coming. This ‘work’ thing was not going away.”

No, the work will never go away. Whether it’s honing her comedy timing with Second City, or creating, writing and performing in television shows like “SNL” and “30 Rock,” or writing and performing in films such as Mean Girls, or just finding time to act in movies like the amusing Date Night or writing books like Bossypants that hold their own among the Sedarises and Carrie Fishers, while seeming to be the result of some effortless time spent at the computer keyboard between meetings and camera shots, it seems an easy bet that the work will never go away.

Which leaves poor Midge (short for “midget,” pet name for Alice) with a bit of short shrift. And Tina Fey praying “The Mother’s Prayer for Its Daughter,” which begins:

“First, Lord: No Tattoos. May neither Chinese symbol for truth nor Winnie-the-Pooh holding the FSU logo stain her tender haunches.

“May she be Beautiful but not Damaged, for it’s the Damage that draws the creepy soccer coach’s eye, not the Beauty.”

“When the Crystal Meth is offered, May she remember the parents who cut her grapes in half and Stick with beer.”