Coffee, Tea, Or Kool-Aid: Which Party Politics Are You Swallowing? 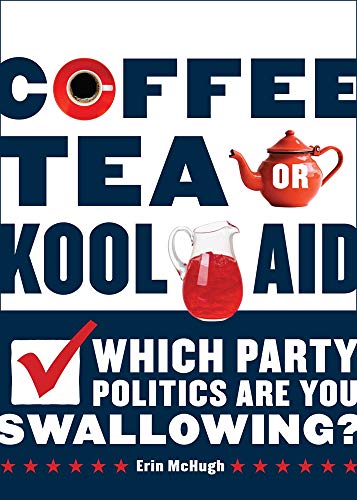 Coffee, Tea or Kool-Aid is the definitive guide to the two new players in American politics, the Tea Party Movement, and the Coffee Party Movement. Where does the Kool-Aid come in? More about that in a moment.

Coffee, Tea or Kool-Aid is a short, 80-page review of the new two teams of new civic involvement, and grassroots (or Astroturf) campaigning coinage. Author Erin McHugh takes her time to explain the two movements, how they started, what they do and do not stand for, and the principle players. Of course, the TPM gets more ink than CPM because, simply, there is more to write about.

Abrams, the publisher, may sound familiar to parents or grandparents of preteens. They are the publisher, among other things, of The Diary of a Wimpy Kid series, comics, and general humor. Erin McHugh is a former publishing executive and author of 20 books on a variety of subjects, from trivia to gay history, road tripping to kids' books. She is also a part-time bookseller. So she clearly knows the publishing world and has a sense of whimsy and fun. But if you are looking for a lot of humor here, you will be disappointed. Yes, there are some funny parts to the book, but that is not its main objective.

Ms. McHugh takes the time to explain the history of the two movements, both started by women—politically angry women. She talks about the leadership and supporters of the two movements, including Kellie Carender, a Seattle blogger who called for the first Tea Party rally on February 9, 2009, and her counterpart, Annabelle Park, documentary film producer and Facebook aficionado, who could not stand the yelling any longer. There are short bios on the media and celebrity supporters, such as Rush and Glenn for the TPM and . . . well, there are no known top shelf celebs for the CPM.

You are introduced to the mission statements of both movements, Venn diagrams that will take you back to high school math (if you can remember that far back), and examples of rally poster board slogans—at least the ones with the poor spelling or that make little sense, and that is where the humor comes in, but only if you sit left of center or right of center and possess a good sense of humor.

So what about the Kool-Aid? Of course, the title is a play on the 1967 book Coffee, Tea or Me. However, the Me had to be replaced. Why not Kool-Aid? After all, it had a wonderful reputation for delivering a sugar high to children around the world, until the name came about hard times with the publishing of Tom Wolfe’s 1968 The Electric Kool-Aid Acid Test and of Jim Jones and his People’s Temple mass suicide in 1978. Remember that when you go to your next political rally: “Don’t drink the Kool-Aid.”

Kool-Aid’s symbolism is important to the book. Watch what values you drink, they may be poisonous. Or, as Dr. Seuss once said, “Spit out the hot air and be careful what you swallow.”

The rants, the raves (pun intended), the misspellings, the nonsense, the unmitigated passivity, the gall, and the guts of these two “warring” factions are only tempered by the fact that they have more in common than not. Smaller government, balanced federal budget, accountability and, transparency. So why are we fighting?

This reviewer will be keeping Coffee, Tea or Kool-Aid in my personal reference library. The information is solid, though at times one-sided. It is a good start in understanding the complexity of 21st century politics and the importance of real grassroots campaigns. All done with a sense of history, humor, and cynicism.