Childhood Disrupted: How Your Biography Becomes Your Biology, and How You Can Heal 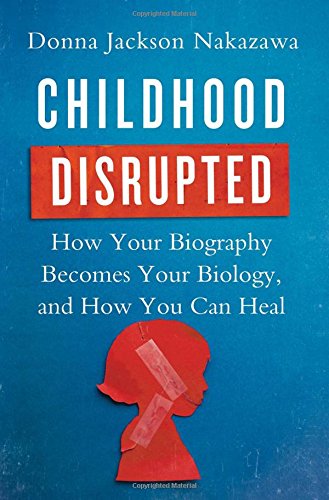 A book with an intriguing title and potentially interesting content sometimes disappoints. Childhood Disrupted presents an overarching theory that adult emotional and physical health is predominantly created by childhood trauma. It proposes that trauma erroneously wires the childhood brain, and brain inflammation from highly stressful events can result in a variety of mental conditions including depression, anxiety disorders, obsessive compulsive disorder, failed relationships, poor parenting and low self-esteem. Perhaps even more revolutionary is the proposition that a wide variety of differing childhood traumas can result in many physical illnesses, including cardiovascular disease, high blood pressure, diabetes, cancer, stroke, and an array of autoimmune diseases.

Mental health professionals have long known the connection between significant childhood experiences and ultimate adult outcomes. What becomes difficult to accept is that almost every major adult illness that emerges can be traced in large measure to one’s childhood. Brief mention is made of lifestyle, genetics, environmental toxins, diet, and infection as other disease causes, but these are given short shrift.

To propose and support such a major theory, one would expect a more scholarly book, not a volume more suited to Glamour magazine, Ladies Home Journal, Working Mother, and the AARP magazine, for which the author has written. Nakazawa’s writing is clear and readable. She quotes a variety of experts at noted educational institutions whom she interviewed and whose comments support her conclusions.

There is almost an overwhelming emphasis however on the work of two individuals: Vincent Filetti MD and Robert Anda, a medical epidemiologist at the CDC. Much of their collaborative work is based on the simple Adverse Childhood Experience (ACE) questionnaire developed by this duo. The author states that she has reviewed “the over 70 papers” on the validity and usefulness of this test in predicting teen and adult disease. There is very little other research however which would support Filetti and Anda’s work or in some cases challenge it. She often uses the phrases “Science tells us . . . ,” and “Researchers all across the country believe . . .” and “Numerous neuroscientists say . . .” without specific references that can be read and evaluated.

Reading further, it is proposed that major childhood stressors such as the death of a parent, sexual or physical abuse, having a parent in jail, feeling unloved by one or both parents, or severe bullying can lead to the illnesses mentioned; however, relatively minor stressors such as overhearing parental arguments, having emotional and “over reactive” parents and minor stressors when recurrent or long term can also result in disease.

Lack of stressors though is also problematic as the child will be unprepared to successfully confront the challenges of adulthood. Children should experience just the right “Goldilocks sweet spot” of stress in order to become competent adults, partners, and parents. It is noted that there are a significant number of adults who have experienced major stressors but do not develop illness. She makes no effort to quantify or examine their histories. Malcolm Gladwell is quoted to say that one in ten children who experience “suffering and despair” as a child rises to be “indomitable” adults. This is certainly odd since the book’s hypothesis postulates universal brain wiring difficulties and inflammation from trauma.

To heal one’s broken self from childhood trauma, “therapy matters.” Little is mentioned about traditional modalities of therapy which many studies have shown to be effective in healing childhood trauma. Treatments such as hypnosis, nutritional alteration, and probiotics (all of which have questionable validity at best) are recommended. A parent must “manage one’s own baggage,” although it is somewhat unclear how this is to occur. Reparative or positive parenting techniques include “look into your child’s eyes,” “if you lose it, apologize right away. . . .” “validate and normalize all your child’s emotions,” “bring mindfulness into the school,” make sure a child has “a reliable adult or mentor” and use “the 20 second hug.” I genuinely wish that good parenting and resolution of deep-seated childhood problems would be this simple.

The strength of this book is in the case histories of the 18 individuals that the author states she “followed” in preparation for the book. It is unclear how these particular case histories were selected and whether they were “cherry picked” to support her hypotheses. How many cases were “followed” that had childhood trauma but no disease, or had adult disease but no trauma?

I wish I liked this book more because ultimately in my opinion, some of these concepts may prove to be at least partially true. It certainly behooves all healthcare professionals to at least ask patients about childhood trauma although the book implies that merely verbalizing the traumas will correct their effects.

This book is reminiscent of Grain Brain and Brain Maker by David Perlmutter who suggests that sugar, carbohydrates, and gluten lead to ADHD, autism, Alzheimer’s disease and other brain diseases almost ad infinitum. Childhood Disrupted may turn out to have wide circulation and be recommended by one preschool parent to another when the first person has a moment which “connects” her/his childhood to a physical condition.

It is not that this is a bad book or is totally on the wrong track. It simply attempts to propose a major hypothesis because the author says so and some “experts” agree. It is unrealistic at our current state of knowledge to propose a universal cause for such a wide range of conditions. Proposing that simplistic pop culture “therapies” are profoundly effective is the stuff of self-help books. The blanket statements and broad conclusions that this book reaches may not be absolutely wrong, but can only be accepted when they are explored in more depth.