Life in a Marital Institution: Twenty Years of Monogamy in One Terrifying Memoir 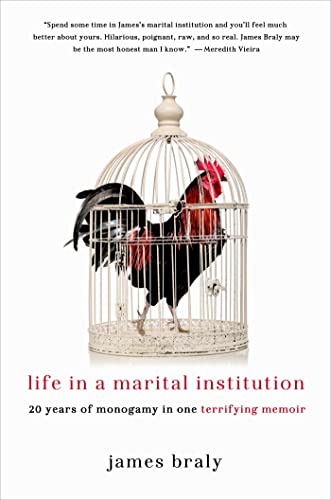 “Mr. Braly: Man up. Stop spreading gossip about your family. Start protecting your sons [and] Show some respect for the woman who made their existence possible.”

Based on his stand-up comedy routine, professional victim James Braly’s Life in a Martial Institution is a reminder that the good old boys of the Republican Party are not the only American warriors fighting the war on women.

Indeed, that nefarious space known as “the arts” is much more than a battlefield, it is an entire theater (pun intended). This new volley, a tedious diatribe, chronicles in excruciating detail author Braly’s complete abdication of responsibility for everything that has happened in his marriage.

His pathetic crowing makes one stare longingly at the cover, wishing that Mr. Braly was one cock that had stayed in the cage.

After wading through 288 pages of mostly drivel, it is apparent that what we have here is a story so routine, so every day and ordinary that the time sunk into reading is time you’ll never get back.

In the end Life in a Marital Institution chronicles just another sad, pointless, immature man walking away from his family because he can’t bear to be wrong and besides, he’s “been looking at the same set of breasts for four presidential administrations,” and wants “to see a new pair.”

According to the publicity materials, Mr. Braly is writing about marriage “from the often unspoken point of view of the tortured husband.” Hello? Have they never seen HBO? Showtime? Prime time? Any station but PBS? American culture is awash with masculine arrested development. It’s the reason Jay McInerney is considered literature while Candice Bushnell is mere chick lit. “Often unspoken?” Get outta here.

Marriage through a man-child’s eyes is its own genre. Provocative, original, and shocking—maybe back in the 1950s, the last decade that American families (and products) were built to last and every bathroom boasted matching his and hers towels. That was a long time ago. And the result of men shamelessly pursuing their adolescence into adulthood; according to the latest census, the largest group of Americans living in poverty are single mothers and their children. If it weren’t for this statistic, Life in a Marital Institution would be merely boring, but because of this statistic it is disgraceful.

Mr. Braly has been dining out on his wife for years, shamelessly exploiting her, their children, and her devotion to their children. Thirteen therapists later and he still can’t have an adult conversation with her, resorting instead to talking about her behind her back in public and making their children the objects of ridicule. How would you like to show up at middle school to be known as the kid who was breastfed until he was six?

But reality checks aren’t this “magical thinking” author’s strong point. Like all the dominant voices in American letters he is bound and determined to brush reality aside, joining Eminem and all the others guys who claim to love their children while simultaneously hating the woman who cocreated those children. Whereas Eminem’s sheer talent sometimes transcends his misogyny, Mr. Braly is way too pedestrian for that redemption.

This is not to say Mr. Braly has no talent: his writing moves along, and his portraits are skillful through always unkind. Scenes with his sister sometimes move beyond “how her dying affects me,” to providing a moving portrayal of sibling care.

In the war on women, however, the boys have got each other’s backs; their books are guaranteed print runs that would make most women authors blush. Mr. Braly is part of the gang, a buddy, a personal friend of Jonathan Ames—as is every other arty misogynist in town. New York magazine will freeze a subscriber’s ability to comment on reviews if the subscriber dares to point out a reviewer’s consistent, unwavering, and predictable praising of all things masculine and trashing of all that is feminine.

Who cares? Right-wing Harvard soundbytist extraordinaire Niall Ferguson had the audacity to write an entire book (Civilization, The West and the Rest) on the decline of the west and not so much as tip his cap to the demise of the western family.

America has a tin ear in this regard—no, America, a wife is not the same as a prostitute with only one client; wives are the glue that kept western civilization together, and Mr. Braly's braying is yet another nail in its coffin.

For Mr. Braly words are a weapon used to control his women—ex-girlfriend, wife, mother, sisters. He puts a pen to their heads and tells them: Do what I want and I’ll write you love poems, vex me and those verses turn to hate.

It is not until the end and his family is smashed to pieces that Mr. Braly begins to see that his wife has brought meaning to his life; that were it not for her he would not have his sons, that theirs is the most important and meaningful adult relationship he has or will ever have.

But this is too little, too late. By then he’s truncated his sons in precisely the same way his father destroyed him: by absenting himself from the family home. For better or worse, men make men, and one can only assume that in doing so the author has inflicted developmentally arrested males on the next generation of American wives and mothers.

Although we do only get Mr. Braly’s point of view—his version of the marriage—it’s clear that he’s at least 50 percent to blame for everything unpleasant about it, and that were he man enough to admit he was wrong occasionally, if he were a little more aggressive and a lot less passive, these two may have worked it out for the sake of their children, if for no other reason. After all, if even some of what he says is true, it may well be these two deserve each other.

Why did Mr. Braly decide to tell his dull tale in public? Perhaps after all those therapists telling him exactly the same thing he’s seeking wider advice.

Here’s some advice you can actually use, Mr. Braly: Man up.

Stop spreading gossip about your family. Start protecting your sons whose existence makes you immortal and simultaneously more important and dangerous than the boys from Entourage. Show some respect for the woman who made their existence possible.

Oh yes, and shut up.

Jillian Abbott teaches was a contributing op-ed writer at The Australian and has written for the Washington Post, the New York Daily News, The Independent (U.K.), and The Writer magazine, among other outlets. She was chair of the Hammett Award Reading Committee 2011 and a judge for the International Thriller Writer awards for 2011 and 2012. Her short stories have won awards and have been published the U.S. and Australia, including in Queens Noir. Her interactive iBook/app Air Quality will be available in the iBook Store in April 2013.