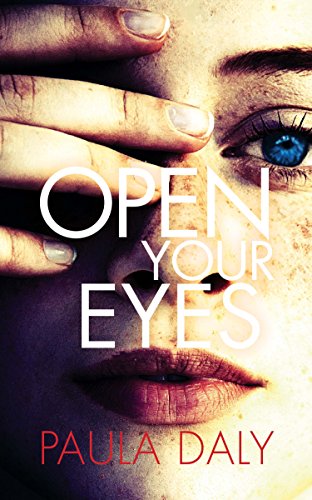 In Paula Daly’s new mystery, Open Your Eyes her protagonist, Jane Campbell is a wife, a mother, and a would-be author. The first page of the story is a rejection letter . . . or another rejection letter. Jane has quite a collection of them.

Her husband, Leon, is a noted author of thriller crime stories with a series of detective stories under his belt. He finds her disappointment annoying and suggests she just drop the attempts at writing since her success is nonexistent. With a heavy heart, Jane agrees.

As they are about to set out to visit Leon’s mother for dinner, the neighbor, Lawrence approaches and begins a confrontational dialogue with Lawrence. Preferring not to be part of the argument, Jane goes back inside to get Leon a beer, leaving him and their two toddlers in the car, in the driveway. When she returns she discovers that Leon has been attacked and the only witnesses are her two tiny children.

The police are summoned, and Leon is taken to the hospital where they discover he was shot in the head with a nail gun, and two, two-inch nails remain lodged in his head.

And so the search begins to find out who would do such a thing. As most often happens in injuries of this nature, the first suspect is Jane herself. She has to jump through several hoops to convince the detective that she did not attack her husband, especially not with two tiny children sitting in the back of the car.

But to convince the authorities, she must find the real perpetrator. With Leon in recovery, Jane invites their closest friends to her house and expresses her concerns. It is at this dinner that she learns that Leon kept secrets from her; principally financial secrets and they were nearly broke.

Devastated by the news, she calls Leon’s agent and publisher and learns that this is, indeed true. Payments for his newest book have been held up because the book is not finished and not anywhere near being finished. There will be no more income until the publisher gets the final draft of the book.

When Leon recovers, Jane discovers that his memory is inaccurate at best. She returns to the hospital to find that he does not know who she is, and he thinks he is still married to his first wife, whom he divorced to marry Jane. When he sees Jane, he claims that she is the one who shot him.

In an attempt to help him recover his full memory, Jane contacts his first wife who is none too pleased to hear from Jane, but agrees to go and see Leon. She does, he thinks they are still married, and she tells him no, they are not and she won’t be returning to see him again.

Leon remains in the hospital, and in an effort to bring some money into the house, Jane takes on a job teaching a creative writing class in the local jail, where she is threatened by an inmate that she must stop trying to find out who hurt Leon. There is no guard in the class with her, and she succeeds in getting out of the room and reporting the attack.

Soon Leon is released to Jane’s care. He is slowly recovering his memory, but has moments of violent anger, aimed mostly at Jane. In an effort to determine why he has not finished the book that he told her he finished, she begins to rummage through his attic workplace.

She finds correspondence from another author who claims his work was stolen and plagiarized by Leon. Jane is beside herself; she knows this could not be true. She contacts the author only to discover that he has been threatened with bodily harm if he does not stop making this claim. Within a few days, he is found dead.

As she continues to search through Leon’s workplace, she discovers several videos that he took from the attic window across the street toward the neighbor’s house. In several of the videos she sees a black car slowly driving along the street but the focus is more on the neighbor’s house. Jane convinces herself that the neighbors are somehow invested in Leon’s attack. Their son is an adult with mental disorders, the wife is angry about Jane’s cat messing in the garden, and the husband is, well, just angry.

The suspects start adding up and the police are not much help in finding the real culprit. One of Jane and Leon’s friends, Frankie, another writer, suggests that to help alleviate the money problem, Jane should finish Leon’s book. Leon certainly is not capable of doing it and without it being completed, there won’t be any more royalties or advances.

Now, Daly has a good setup here, but her carry-through is weak at times. First, one wonders if there are really jails where female citizens go to teach a class to inmates and there is no guard in the room. Then, the first wife being summoned is also curious, especially since that is the one and only scene in which she appears, and she is not a candidate for attacker.

It’s a good premise and Daly does a respectable job of laying out all the clues. This gets a three-star review. Not a disappointment, just some things that are hard to figure out.