The Order of the Day 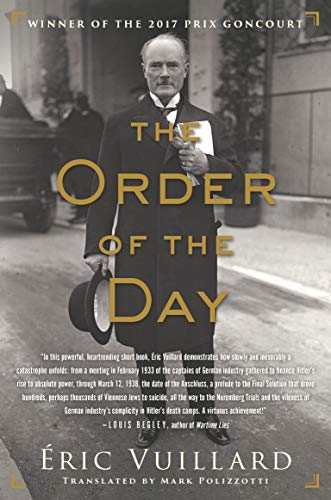 “The Order of the Day is smug, self-important, and pedestrian history.”

Popular memory is a funny thing. Funniest of all (in a darkly comical way) is the fact that popular memory is almost always wrong. Take for instance the Anschluss of 1938. First and foremost, the Austrians were not the victims of the Nazi state, but rather the enthusiastic “joiners” of Hitler’s pan-German empire.

Second, a German blitzkrieg did not overwhelm the smaller Austrian Army, and indeed the German Wehrmacht stalled out in Linz. Finally, as French writer and documentarian Eric Vuillard points out in The Order of the Day, the rise of National Socialist Germany was not a hostile takeover but rather a slow, bumbling rise that was consistently helped along by weak-willed Anglo-French governments.

The Order of the Day has already won two prizes from the French literary establishment, plus it has been shortlisted and longlisted by several prestigious organizations. After reading this short book, a single question arises: Why? The Order of the Day is bad history imbued with pop psychology and adorned with purple prose riddled with unnecessary diversions.

Ostensibly, The Order of the Day is about Nazi Germany’s incorporation of Austria into its Third Reich. Vuillard does do a good job of presenting this moment as a series of silly events, but almost all of the good moments here are undercut by the author’s constant need to make his own presence known.

This book is pockmarked with the author’s opinions about historical figures (former Austrian President Wilhelm Miklas is “dreary” and a “poor bastard;” Austrian Chancellor Kurt Schuschnigg is a pathetic weakling) and ideologies (Vuillard calls corporatism and National Catholicism a “farce” while simultaneously implying he knows what “true” Catholicism looks like). This is gossip-y writing, and The Order of the Day exudes of more than a passing whiff of the arrogance of the self-appointed intellectual. This is especially ironic given Vuillard’s many rants here against aristocratic arrogance.

The great annoyance in The Order of the Day is its artistic license. Vuillard presumes to know what men were thinking in 1932, 1938, and 1945. He does this without citing sources, mind you, and at several points The Order of the Day devotes whole chapters to topics (music, a mad French artist) that have absolutely nothing to do with his main narrative. Yes, Vuillard is a great stylist, but not a good storyteller.

Like many histories of the Second World War, The Order of the Day is myopic. Vuillard’s true point here is to castigate major German companies for backing Hitler and the British and French for not doing more to thwart the Nazi menace. These critiques have been voiced a million times, and every time they tend to overlook significant facts.

First of all, a majority of people in Great Britain and the United States did not want war with Germany, and this was mostly because they felt that they had been lied into fighting the First World War. Second, the Allies, with good reason, felt that Hitler was restoring German pride after years of an unfair peace and even worse economic burdens placed on Germany. Third, the French Third Republic was close to a civil war between its Left and Right, while the Anglo-American governments were in no economic or military position to seriously challenge the Rome-Berlin alliance.

Finally, while the crimes of the National Socialists were certainly known in London, Paris, and Washington, D.C., these same capitals also knew about the crimes of the Soviet Union, which, in 1938, dwarfed those carried out by the Nazis. Hitler and the right-wing regimes told Britain and France that they intended to defeat Communism, and given that Soviet revolutionaries had been financing and arming revolutions across the world since 1919, is it any surprise that fascism was initially welcomed by democracies that felt threatened by the Communist and socialist Left?

The Order of the Day is smug, self-important, and pedestrian history.