Otherwise Known as the Human Condition: Selected Essays and Reviews 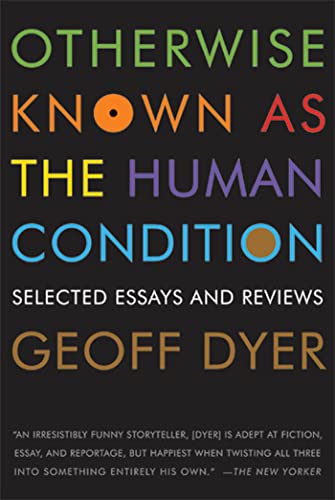 In the introduction to his new collection of selected essays, Otherwise Known as the Human Condition, novelist and author Geoff Dyer writes, “When writers have achieved a certain reputation they are sometimes prevailed upon to publish their ‘occasional pieces’ (i.e. their journalism). The author agrees, reluctantly, modestly . . . because this kind of a put-together is considered a pretty low form of book, barely a book at all.

“My own case—and my own opinion of such collections—is a little different. Almost as soon as I began writing for magazines and newspapers, I hoped one day to see my articles published in book form. I especially wanted to publish such a book because I virtually never read newspapers or magazines. If I see a piece by a writer I admire in a paper I very rarely read it; but as I skim through catalogs of forthcoming books, the ones that catch my eye are the collections of exactly those pieces that I had neglected to read in their original context. Since I prefer to read other people’s journalism in book form, it was not just vanity that made me want to see my own presented that way too.”

And, as the reader can attest after sharing 432 pages with Mr. Dyer, that’s his story—and he’s sticking to it.

But, rather remarkably, Mr. Dyer’s need to collect his work—for those who, like he, missed it the first time around in the context of the magazine or newspaper in question—actually benefits from this act of gathering them into book form, not only by providing the chance to read them fresh here, but also through the book’s bumper car approach to smashing together the individual pieces—or, as the reader considers them, “chunks” of writing, aka essays.

For while the individual chunks are gathered together in a vaguely organized manner—the beginning of the book does a better job of it, with essays on photography lumped in under the title “Visuals,” and essays on novels and the other writings of novelists jointly referred to as “Verbals,” while things get a bit murkier with the jazz-influenced “Musicals,” the surprisingly, almost embarrassingly self-revelatory “Personals” and the God-only-knows-where-this-belongs “Variables”—it is Mr. Dyer’s writing itself, his verbiage and the dire Dyer-ness of it all that gives the work its through-line.

As the author puts it, “The more varied the pieces, the more obviously they needed to be seen together as the work of one person—because the only thing they have in common was that they were by that person.”

But as the reader hastens to attest, the very fact that these pieces were written by Geoff Dyer is more than reason enough for them to have been gathered together here and for others to want to read them.

Which is not to say that they are not as much a mixed bag when it comes to quality of work (the ho-hum pondering of Ian McEwan’s Atonement, for example, in all it’s “knickers down” glory; or the altogether ridiculous “Sex and Hotels;” and the too-much-information overload of “Sacked,” which actually seems to consist more of emoticons than of words) as when considering the range of topics. But, here again, the Human Condition proves to be more than the sum of its parts.

For this reason, skipping the weaker bits is not recommended. Instead, the book, like a medicine that is good for you, is much better swallowed whole. Read it as fast or slow as you will, read the chunks in any order you want, but make sure to read it all.

Read to discover why Avedon shot W. H. Auden in the middle of the street in the middle of a snowstorm, with the poet’s ever-present carpet slippers just barely visible in the gathering slush. Read for the lazy man’s consideration of Fitzgerald, and why Tender Is the Night still speaks today in echo while The Beautiful and the Damned seems more antiquated with every passing year. And, by all means, read why Mr. Dyer thinks that Cheever, like Isherwood before him, was an author whose journals, “whose private, unpublished writings contained much that was as good as, possibly even better than, the stuff that made their posthumous publication feasible.”

Indeed, in assessing the work, it seems as impossible to speak to each of the various chunks contained therein, as it would be akin to discussing each bit of glass in a kaleidoscope as it floats by. They are published here, as they are meant to be—all together.

The reason why is the author. The mystery that Mr. Dyer weaves, page after page, chunk after chunk: a Polaroid image emerges slowly, slowly, of himself as man, as writer, and as manic, donut fancying jazz aficionado who is haunted by his own footsteps on London’s Effra Road:

“How many times did I walk down Effra Road? How many hours did I spend walking down Effra Road,” he asks in the superb titular chunk, “Otherwise Known as the Human Condition (With Particular Reference to Doughnut Plant Doughnuts);” the passage concludes with the fuse-lighting: “Assuming I was able to walk, I could have made my way down Effra Road when I was no longer capable of going anywhere—or doing anything—else,” a realization that sends him rushing off to Manhattan and Tokyo in a meticulous consideration of the human need to recreate the familiar (Doughnut Plant Doughnuts) within the context of the new (the corner of third and thirty-eighth in Manhattan, also the East Village and Tokyo’s Naka Dori).

To read Otherwise Known as the Human Condition is to take a journey with its author; a journey not in the narrative swells of the Jane Austen version of literary journey, but instead the careening along from thought to thought, place to place, topic to topic. And, as with all good journeys, there are moments in which it is acceptable to sleep and others in which you must hold on tight—then still other moments in which one must dawdle, turn off the cell phone, and soak in the view.

Such is the case with “Blues for Vincent,” a where-in-the-hell-did-that-come-from? chunk of writing at its most evocative.

It begins with the author pondering Ossip Zadkine’s sculpture of Theo and Vincent Van Gogh in a museum in Amsterdam. A pieta of sorts, the figures are intertwined, each with arms around the other, heads touching.

“Soon, however, it becomes obvious that while the sky weighs heavily on both figures, one, Vincent, feels gravity as a force so terrible it can drag men beneath the earth. From this moment on you are held by the pathos and beauty of what Zadkine depicts: despair that is inconsolable, comfort that is endless. One figure says I can never feel better, the other I will hold you until you are better.”

From here, again we are transported, from Amsterdam to Manhattan, to empty mailboxes, to unconcerned cops, to, as the author puts it “groans and shivers.” And so, in a few pages, Mr. Dyer explains to us the birth of the blues, the why and how of it, and why and how it would have offered so much solace to Vincent: “No suffering is so unendurable that is cannot find expression, no pain is so intense that is cannot be lessened—this is the promise in the heart of the blues.”

Such then is the stuff of the Human Condition: the blues, the plain Doughnut Plant doughnuts when you want them, along with the good cappuccino with just the right amount of foam, the waited-for letter in the mailbox when you open it, and a whole great big book of essays like these—sitting, waiting for you on the bedside table.