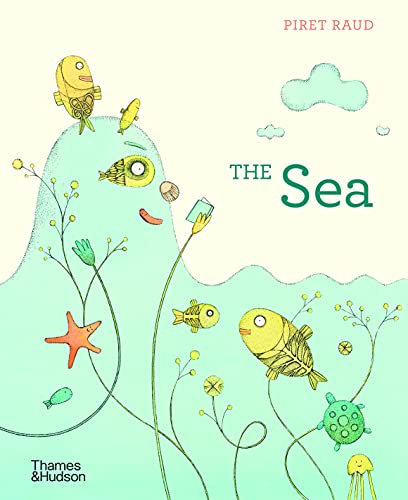 Piret Raud is back! Readers may recall Raud’s The Ear (reviewed here in February 2019), a darling story about an ear that specializes in listening. In The Sea, Raud pulls her renowned illustration style into another endearing story.

Opening with a view of life in and around the water, Raud-style fish frolic, a turtle twirls, and a little ducky dallies among the sea plants. The Sea is personified as a mother-type figure, given a face assembled out of sea creatures: a fish for an eye, a clam shell for a nose, a wormy mouth, even a jellyfish hat. Sea looks as though she is cradling everything in her bosom and caring for each life as if it were the most precious thing in the world.

Indeed, we are told, “She looked after them the best she could—fed and bathed them, took them for a walk in the park.” Water world becomes a life that kids would live on land, complete with bedtime stories.

Every now and then, when the fish are loud and rowdy, the Sea craves peace and quiet. She longs for a place where she can be alone. Sure enough, one day arrives, and the Sea up and leaves (she evaporates!!). The fish and all the sea creatures are left behind to fend for themselves.

The fish behave as one might expect: PARTY! Being loud, dancing, shenanigans galore. Until it is time for their bedtime story. Then it hits. The Sea is gone. Who will take care of them? Who will read to them? Woe, anxiety, worry as the fretting fish can’t read.

Out of nowhere appears evil antagonist in the form of Cat, who happens to know how to read. One can almost feel the smarmy insincerity in the twirl of the Cat’s greasy handlebar mustache. This is one creepy cat who makes one creepy deal, “I will gladly read to you . . . but you have to let me eat you!” And the fish acquiesce. Raud calls them silly fish, but the reader might just be yelling out at them, “How stupid can you be?”

As the bedtime story progresses, the fish become more and more homesick for the Sea. The longing builds and builds and the fish start crying. The turtles cry. The worms cry. Tears are everywhere. Torrents of tears fill up so much that the Sea is returned to her home. (And, spoiler alert, evil kitty is scared away without eating a single fish).

But that’s not quite the end. The Sea realizes that she can teach the fish how to read for themselves. The fish then love reading so much, they become so engrossed with their own books, that there is peace and quiet and the Sea doesn’t feel the need to go away in order to think her own thoughts. Win-win.

The Sea puts power back into understated storytime, which often gets shuffled aside in favor of more “social” activities. It reminds us just how impactful it can be to share reading time together.