Out of Order: Stories from the History of the Supreme Court 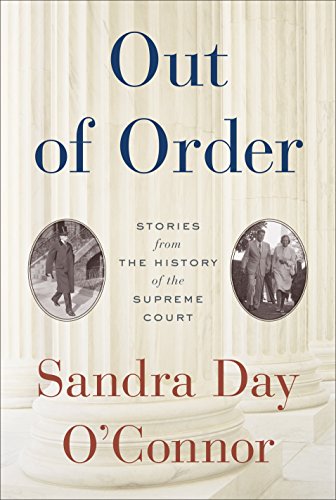 “In writing Out of Order, Sandra Day O’Connor has created a worthy and captivating historical document.”

“Only when we reflect on the Court’s journey as a whole can we truly appreciate the remarkable feat of our Founding Fathers and the remarkable accomplishments of our thriving federal judiciary.”
—Sandra Day O’Connor

There are countless volumes written about the judicial branch of our government. Some focus on cases, others on the persons who served, and still others on how the Court operates. Many of these tomes are overly technical and intimidating.

Not this one. Out of Order provides the average reader as well as the scholar with a fascinating framework of history, highlighting significant cases, profiling notable Justices, and reflecting on the author’s own tenure on the Supreme Court. The inclusion of details about customs and traditions—as well as humorous incidents—renders this high-powered role in this lofty institution a bit more human—especially to the average American citizen.

The Supreme Court has developed from its early days as one of the innovative ideas of the Founding Fathers to its firmly established role as today’s guarantor of constitutional rights. According to Justice O’Connor the Court was a “daring, bold and risky political experiment—born and evolved out of struggle and serendipity.” Today’s Court has come a long way from its beginning.

For example, the original Court sat annually for six weeks, hearing only 60 cases in its first 10 years. Justices were compelled to “ride circuit,” presiding over cases in their respective geographic areas and acting as ambassadors of the new government. They sometimes traveled thousands of miles under rigorous conditions.

Ultimately, our three-tiered system of federal courts emerged. Along with this change came the birth of the “writ of certiorari” —the order by which the Court opts to review a lower court decision.

The Judiciary Act of 1925 called for the Court to consider only cases limited to “questions” of constitutional construction, Today the docket is decided exclusively by the Justices with about 100 cases covered (selected from 8,000 petitions) per nine-month session.

As to her own evolution, Justice O’Connor is long on honesty. She served for 25 years, consistently offering up centrist opinions,

“. . . and after hearing a few thousand cases, I think I began to get the hang of it. Moreover, because I long ago stopped caring what politicians and the media (said) about me, I was also better able to make the hard decision that might make my powerful neighbors mad.”

She considers all members of the Court “but one small part of a rich and unfolding tapestry. Each Justice plays merely a supporting role in the Court’s ongoing narrative, and each Justice’s experience is but a snapshot in time.”

The journey, as mentioned above, contained struggle. Justice O’Connor carefully highlights some historic examples of conflict between the Executive and Judicial branches.

Marbury v. Madison, for example could have been called the Marshall v. Jefferson decision due to the animosity it created between the President and the Chief Justice. The decision established that the Court had the power to determine the constitutionality of laws passed by Congress. This struggle, according to the author, established the Court’s role as a coequal branch of government.

Conversely, Abraham Lincoln defied a direct court order of Chief Justice Roger Taney to uphold the writ of habeas corpus during the early days of the Civil War. The Congress supported Lincoln’s decision after the fact.

Harry Truman’s seizure of the steel mills during WWII might be the most significant example of these struggles. Truman argued that his actions were justified based on wartime precedents; the court opposed the president’s unbridled use of authority—even Truman’s Court appointees voted against this action.

Judicial appointments are at the heart of the Executive-Judicial intersection. Some early appointees, including John Jay, the first Chief Justice, wondered if the Court would ever amount to much and resigned as more substantive opportunities surfaced. Today, Justices tend to accept their appointment as a lifetime commitment. Judicial appointments are either a source of great pride—or bitter disappointment.

James Madison, for example, appointed Joseph Storey, who left a legacy of scholarship considered “one of the seminal sources of historical information on early American jurisprudence.”

John Adams appointed John Marshall, who served for 34 years. He is remembered for his contribution in shaping the Court (see Marbury v. Madison). He wrote 500 opinions and participated in 500 more during his tenure.

In contrast, Woodrow Wilson’s appointment of James McReynolds (possibly to get him out of his cabinet) proved disappointing to Wilson—and the Court. McReynolds refused to speak to Louis Brandeis, the first Jewish Justice. He wrote short opinions without citations. And later he was bitterly opposed to the New Deal, referring to President Roosevelt as “that crippled jackass.”

Justice O’Connor reveals her reverence for the Constitution and for the Court. At the same time, she exposes the Court’s flaws—wittingly or not.

Lifetime appointments, for example, allow the Justices freedom to make decisions without outside influence. This also means the Court is “stuck” with members who refuse to resign.

Among the examples cited are James McReynolds, mentioned above, and William O. Douglas, whose tenure went beyond his time of effectiveness. During William Rhenquist’s tenure as Chief Justice, the Court operated for 11 years without a change in membership. While such stability contributes to continuity, it can also contribute to insularity.

A section of this book is devoted to historic “firsts” on the Court in which Justice O’Connor briefly mentions her own history-making role as the first woman Justice. It is too bad that she did not include more about her own work, but perhaps she considers that her autobiography and/or Joan Biskupic’s biography have covered that ground.

Although Justice O’Connor reluctantly retired due to family obligations, she continues to work as an advocate and teacher, influencing school curricula and making the Court more understandable to all of us. In writing Out of Order, Sandra Day O’Connor has created a worthy and captivating historical document.