We Don't Eat Our Classmates 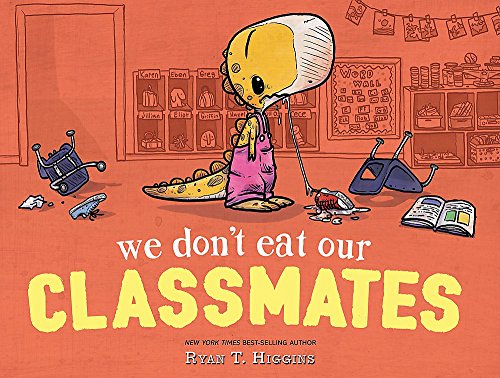 The intriguing title got this reviewer’s attention. The protagonist is a T. rex named Penelope, and it’s her first day of school. Penelope is nervous about going. We see her new backpack and her lunch. She loves ponies because they are delicious.

Penelope finds out on the first day that her classmates are children. This is a problem, because children are delicious. When she eats the whole class, the teacher orders her to spit them out. Now the children are covered in dinosaur saliva and slime. She doesn’t make any friends that first day.

When Penelope gets home, her dad asks her if she had made any friends. Then he reminds her not to eat her classmates. He tells her that “children are the same as us on the inside. Just tastier.”

The next day Penelope only eats one student. She gets in trouble, and everyone is afraid of her except Walter the classroom goldfish. When Penelope sticks her claw in the fish bowl to make friends, Walter bites it. Now Penelope knows what it’s like to be eaten. She stops eating her classmates and makes friends with them instead. The art shows an oversized bandage on Penelope’s finger.

Walter the gold fish licks his lips on the next to the last page while Penelope screams n terror, because dinosaurs are delicious.

The art plays up the jokes. Penelope is a yellow T. rex in pink overalls. Her mother is blue, and her father is orange. Penelope opens her mouth at the foot of the slide, and finger paints her mouth open while eating a child. She invites one classmate to sit on her plate. Penelope has ponies on her lunch box, bedspread, and backpack.

The classmates area diverse bunch: black, white, Asian, Hispanic, one even wears a yarmulke. A girl wears glasses. All that’s missing is a kid in a wheelchair. The end papers are chartreuse with a clothesline and kinder art hung up with clothespins.

This hilarious book will become a favorite for both parents and their kids in preschool and kindergarten.  First days are scary business, but Penelope shows the reader that a tiny T. rex can also be scared.

After all, dinosaurs are the same as us on the inside.