The Liberation of Europe 1944–1945: The Photographers Who Captured History from D-Day to Berlin 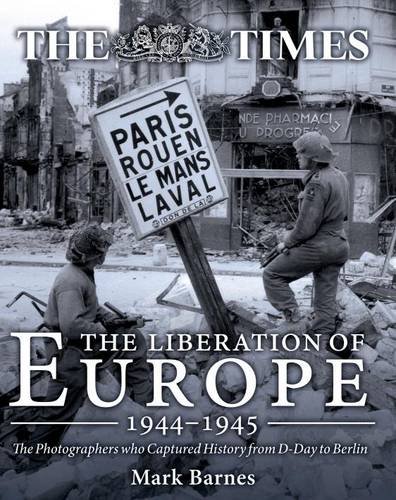 A photographic publication of any historical event is to be welcomed, and the Second World War was one of the most widely covered and photographed conflicts in history. The obvious highlight of the art and science of photography is the fact that a specific moment in time can be captured: the look and dress of people of an earlier era as well as the immediate circumstances or context of the moment, the landscape, and other physical features.

Even though those of us who have come after the world’s greatest conflict have gained through its photographic depiction, not all such efforts have necessarily seen the light of day. Consequently, another highlight is the book under review, inasmuch as it provides many, particularly Americans, with the opportunity to appreciate photographs which may not have been as widely published or available in America at the time or subsequently.

The photographs in question were among the tens of thousands taken by a relative handful of photographers for British publications such as The Times, The Daily Telegraph, and others, who were embedded with the British army over the course of the 11-month campaign in northwest Europe and the immediate postwar period.

Mark Barnes, a former journalist and reviews editor for War History Online, has produced a volume of four hundred illustrations that portray the British wartime experience, from the mundane and every day, civilian and military, to the destruction of war, horrors of the death camps, and the ecstasy of war’s end.

He has done so in spite of some negatives being lost over time and a sometimes inefficient and confusing postwar filing system on the part of some of the newspapers, necessitating some detective work on his end to identify images, dates, places, and/or an image’s photographer.

Although the emphasis is quite obviously and rightly on the photographs, Barnes begins each chapter with a background summary of approximately two pages which explains the thrust or subject of that chapter, with the exception of the four-page first chapter introducing the photographers whose illustrations grace the pages of the book and the evolution of their professional careers.

The other six chapters, respectively, follow the course of the war from D-Day, the race across France into Belgium and Holland, Operation Market-Garden and crossing the Rhine to final victory, judgment at Nuremberg, peace, and demobilization.

One gets the opportunity to view the famous and infamous as well as the everyman and woman in the ranks and on the home front as well, many of whom are identified in the accompanying captions. Equipment, weapons, and vehicles also come in for their fair share of exposure as does the face of war in all of its ugliness. In spite of the British perspective here, there are some illustrations of Yanks and Germans where British forces came into contact with each.

Not surprisingly, many images as well show the evident marks of having been scrutinized by censors at the time. Indeed, some are just now seeing publication for the first time, having been “killed” by those same censors in the name of wartime security and public sensitivities (particularly in the case of those showing one’s own war dead).

On the subject of scrutiny, one would be well advised to do so with many of these images, employing a magnifying glass to obtain further details and information not readily apparent to the naked eye.

Finally, the epilogue is a memorial tribute to Bill Warhurst, one of the more prominent featured photographers, who died in 1953 at a relatively young age.

As a pictorial, there are no notes and, certainly, no maps really were necessary. There is a selected bibliography, almost all from over the past 30 years, for further reading and information on everything from other pictorials, the Canadian soldier, and British tanks, to prominent personalities such as Bernard Montgomery.

In spite of a few “misdirected” captions early on, and these can be easily figured out relative to the illustration in question, there is really nothing here to criticize and everything to appreciate.

Whether or not one prefers to eschew text and actual reading in order to just look at the pictures, this volume is recommended. However, it begs the question of what remains to be seen in the thousands of images that didn’t make the cut. Might additional volumes be forthcoming?