Book of Numbers: A Novel 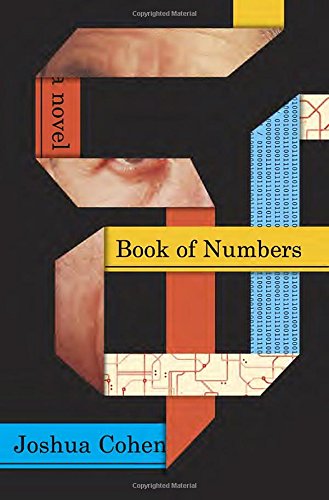 Three-dimensional chess barely conveys the multiple levels, breadth, and ambition that comprise Book of Numbers, Joshua Cohen’s epic of the Internet age and fourth novel. With its erudite vocabulary, compound words and neologisms, multiple voices, and kinds of narration including stream of consciousness blog posts and edited copy including strikethroughs, its energetic writing “road tests the language” (to borrow Clayton Eshelman’s description of the kind of writing he sought as editor of the literary periodical Sulfur).

On the simplest level it is the story of two characters who share their author’s and each other’s name: Joshua Cohen—the fictional struggling, narcissistic, self-defeatist writer nine years older than (and bald and fat unlike) his real life author but like him a tri-state New Yorker—has been hired to ghostwrite the autobiography of Silicon Valley born and raised billionaire search engine mogul Joshua Cohen (a composite of Apple’s Steve Jobs, Google’s Larry Page and Sergey Brin, Microsoft’s Bill Gates, and Oracle’s Larry Ellison) because they share the same name. To distinguish one from the other the latter, who speaks and refers to himself in the first person plural, is referred to as Principal.

Joshua Cohen the ghostwriter has less in common with his author and is a more fully fictional character than, say, the fictional Ben Lerner in that author’s two fictionalized memoir novels Leaving the Atocha Station and 10:04 (also reviewed on NYJB), and the two fictional Joshua Cohens have a less contentious and less adversarial relationship than the fictional Philip Roth and his doppelgänger in Operation Shylock, though Book of Numbers’ ironic tone and humor are somewhat Rothian.

On another level, as James Joyce’s Ulysses loosely mirrors Homer’s The Odyssey, Book of Numbers is based on the fourth book of The Torah of the same English name (though that biblical book’s Hebrew name, Bemidbar, which translates as “In the Desert/Wilderness,” also describes much of the novel’s narrative). Bemidbar opens with a census of the tribes of Israel in the wilderness, and likewise Principal building a search engine is like taking a census of all the websites that comprise the world wide web.

Which, if either, of the two Joshuas is Moses? Do the ghostwriter’s literary agent, mentor, and surrogate older brother Aaron Szlay and his sister Miriam in whose bookstore the ghostwriter once worked represent the biblical Moses’ siblings? Is Kori Dienerowitz, the CEO the venture capitalists force Principal to hire who plots to overthrow him, Korach? If the ghostwriter’s friend and fellow writer Caleb (also a client of Aaron Szlay) is the biblical Caleb would that make the ghostwriter the biblical Joshua (who with Caleb were the two spies whose report of the Promised Land was positive and hopeful)?

On yet a further level Joshua Cohen the ghostwriter represents humanism, the humanities, and in the widest sense humanity, while Principal represents the STEM fields (science, technology, engineering and mathematics) and the corporations and government agencies that gather and surveil our data. Humanities majors might find the ghostwriter’s character more fully developed than that of Principal who has a bland affect and awkward diction: he consistently and annoyingly links the two halves of similes with “as like,” when either “as” or “like” fits but not both, invents compound words such as “comtrast” (compare and contrast), and refers to his parents as D-Unit and M-Unit.

Joshua Cohen the ghostwriter, who is remarkably Jewishly literate for a non-Orthodox diaspora lay character and secure and comfortable in his Jewish identity, also represents the world view of the Abrahamic faiths, while Principal, a convert to Buddhism, and Principal’s mentor and prized employee and Moe, a Hindu, represent the outlook of the eastern religions.

Not that either Joshua is a saint. The ghostwriter is the kind of man who is sexually attracted to women but neither likes nor understands them; he’s also addicted to pornography. His slender, estranged, soon to be ex- wife Rachava’s stream of consciousness blog posts call to mind Joyce’s Molly Bloom, but neither Rach nor any of the other female characters are fully developed. Principal appears to be married to his work except when he goes AWOL in a Zen monastery.

Rachava’s name, a feminine form of the Hebrew word for width or wideness, is an ironic in-joke that only Hebrew speakers and readers of this review will get. A knowledge of Jewish liturgy is also helpful, as in an email from Aaron to the ghostwriter that quotes the Yom Kippur confessional prayer the Vidui in transliterated Hebrew.

The book is divided into three sections which have numerous detours and digressions that reveal its author’s encyclopedic knowledge of a broad range of esoterica but make the novel as a whole a bit messy. The 160 pp. first and 161 pp. third sections tell the ghostwriter’s story from his perspective, while Principal’s narration of his life story, punctuated by the ghostwriter’s brief questions and prompts, takes up most of the 258 pp. middle section. This format is reminiscent of how in Susan Daitch’s formally more coherent novel Paper Conspiracies (also reviewed on NYJB) the first and last sections provide a contemporary frame for the middle sections’ historical narratives.

Principal’s vocabulary though more inventive is less rich and erudite than his ghostwriter’s, and the novel’s second section has a more conventional narrative. Computer illiterate readers may find the discussion of computer science challenging and might not be the appropriate readers for a novel about the Internet age whose title refers not only to the fourth book of The Torah but also to the ones and zeros of binary computer programming languages and the tetration—“the fourth order of magnitude, a quantity exponentiated by itself”—employed by search engines, but the ghostwriter’s sympathy is with them. The novel opens with the following admonition: “If you’re reading this on a screen, fuck off. I’ll only talk if I’m gripped with both hands.”

Before becoming a ghostwriter our fictional author published a novel based on his Holocaust survivor mother’s wartime experiences in concentration camps. Its publication date was September 10, 2001, and the next day’s tragedy buried the book’s launch, and though favorably reviewed by two critics it sold few copies and there was no paperback edition.

Following that disappointment he scrapes by writing book reviews, translating from Hebrew, and writing copy for brochures and internal publications at The Museum of Natural History, where he meets CUNY anthropology professor Alana Hampur (whose large soft body is more to his taste than that of his svelte wife) with whom he develops a transactional relationship in which he ghostwrites her academic publications in exchange for sex.

Nearly a decade after the fictional Cohen’s novel’s publication his agent Aaron conveys the lucrative offer to ghostwrite the autobiography of his namesake, the co-founder of Tetration, a corporation like Google that began as a search engine and like Apple produces its own devices. Like Steve Jobs, Principal has terminal pancreatic cancer.

The interviews that will become the book within the novel begin in Palo Alto but soon move to luxury hotels in Dhubai, Abu Dhabi, and several European cities. While in the emirates our ghostwriter comes to the defense of an Arab Muslim woman being beaten by her husband and becomes infatuated with her.

The narrative takes on a thriller aspect when Kori and b-leaks, a Wiki-leaks type organization, threaten Principal and his ghostwriter. Despite the suspense the novel ends more with a whimper than a bang. Book of Numbers is a whole greater than the sum of its diverse parts that will amply reward readers as ambitious as it is, readers who will eagerly await future works by its young and enormously talented author.