Do Cool Sh*t: Quit Your Day Job, Start Your Own Business, and Live Happily Ever After 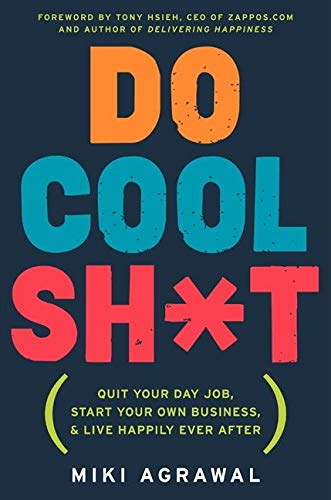 “. . . this quick read is chock full of complications.”

Do Cool Sh*t is half business memoir and half business “how to,” an oddly accessible volume written in a voice consistent with the book’s title.

The author is a driven (understatement) and intelligent woman who dropped out of the conventional business world in her mid-twenties and reinvented herself as an edgy entrepreneur. At age 26 she opened a unique and successful pizza restaurant in Manhattan, now called WILD. The restaurant has been acclaimed by a number of restaurant critics. She pulled this off with an extremely well-conceived, differentiating end product that fulfilled a then unmet consumer niche: Farm-to-table pizza for lactose intolerant, gluten free, and vegan consumers.

But this quick read is chock full of complications. The most troubling—conspicuously absent from the book—involve the New York City Department of Health's (NYCDH) inspections of WILD, with the restaurant briefly shuttered by the authorities in April 2013. Not cool shit. (Details later in this review.)

The first red flag in the actual book is the brevity of the foreword written by Zappos CEO, Tony Hsieh. Ms. Agrawal spotted Mr. Hsieh on an ocean cruise for entrepreneurs, made eye contact, and then connected later via email. A new version of Ms. Agrawal’s New York restaurant will soon open in downtown Las Vegas, where Mr. Hsieh has funded a neighborhood revitalization project after moving Zappos headquarters there in 2010.

In his foreword, shy of a single page, Tony Hsieh notes:

“When Miki asked me to write the foreword for her book, I was a little reluctant . . . And I procrastinated . . . Her stories are great stories, not just for entrepreneurs, but really for anyone who wants to lead a more fulfilling life . . . It’s actually a really good book . . . It’s full of great insights that could have a transformative effect on your own life.”

Mr. Hsieh offers praise. Spare praise. That this visionary author of Delivering Happiness did not write a substantive foreword speaks volumes. Seems he flipped through the book while flying and was clearly not inspired by the author who represents their relationship as a credential at several junctures within the book. Perhaps he was uncomfortable upon reading about the calculated way in which she formed a connection with him.

Why did Miki Agrawal write Do Cool Sh*t?

“This book is meant for those who want to have the greatest stories to tell . . . ‘Wow, a lot of cool shit happened to me this year.’ You will smile, be excited, feel grateful . . . and then carry on doing cool shit.”

“I wrote this book because I wish someone had told me earlier that this kind of life was possible, and perhaps reading this, you can find the answers. . . . I didn’t want to sit through another boring how-to business book . . . from someone thirty years older than I am . . . or a book that simply tackles the nuts and bolts of starting and running a business.”

“And where was the book that would show me where to find the coolest friends who were also doing the coolest shit?”

My kingdom for an editor.

But in all fairness, while the writing in Do Cool Sh*t can at times resemble a lengthy text message, the lingo is deliberate, intended for a targeted cool shit audience. There are those who may enjoy the author's unconventional writing. But then the book is way longer than a tweet.

An overarching facet of Do Cool Sh*t is step-by-step methodologies for managing interpersonal aspects of business and other relationships. The sheer number and permutations of formulae risk conveying an impression of all this as, yes, nimble and savvy, but perhaps also Machiavellian.

Moreover, it is difficult to find anything at all laudable in certain expanses of the book. Consider the title of Chapter 19:

“You Are as Cool as the Friends You Keep: What Cool Shit My Friends Are Up To”

Why not honestly explain to Jenn the irrefutably legitimate reasons for excluding her rather than announce this in a book? Ms. Agrawal’s do cool shit instructions include following her example in making a list of her friends and then excluding those where relationships are characterized by more negativity than positivity. Many in Jenn’s position might consider this sage advice.

After dismissing much of the oeuvre of existing business books for entrepreneurs (yeah, all written by the stiffs decades older) and having described her entrepreneurial paradigm, the author includes a section (within a chapter) entitled "Mental Reframe." Included are often unequivocal instructions as to what one should eat and drink.

For example: “Your goal should be to replace all drinks with water.”

WILD includes wine and beer on its menu—as well as sugar cane soda and coffee.

Ms. Agrawal next tackles “exercise,” a word she reframes as “releasing.” Basis for this? Well, she does reference Matthew McConaughey:

There is also excessive biographical detail, much of it tangential. Ten percent of this verbiage would have provided ample context. The other 90 percent of the time spent reading these pages―time the book's audience will never reclaim―could be spent more productively. Say, napping?

We are told a dough shortgage fiasco ensued because an out-of-her-depth manager failed to order it on time. But the author is relentlessly resourceful by procuring dough from other pizza restaurants. But were they lactose-free and if not did she remove these from the menu? Possibly, but not addressed. And amidst the shortage after describing her interaction with her manager she refers to her as “defeated.” Master of the lacrose-free pizza universe?

The purpose of this anecdote was to describe a narrowly averted disaster, closing early on a weekend, and lessons learned. The first words in the boxed text entitled Do Cool Shit Lesson that follows the scramble for pizza dough:

“Hire slowly. Fire fast . . . No one has ever said that they fired someone too soon.”

Fast forward to the period between April 2010 and April 2013. On six out of sixteen occasions NYCDH assigned WILD scores equivalent to “C,” its lowest restaurant grade. (No records going back further than April 2010).

Once a restaurant receives a score of 28 or higher (the “C” equivalent, lower scores mean fewer violations), the department follows up with another inspection. This next score typically becomes a grade. How high can a “C” go? How high is up? WILD received a score of 66 in April 2010.

A pattern is easily traced. Each of the first four times the restaurant scored 28 or higher, on its next inspection the restaurant was in “A” territory, avoiding closure.

"The Health Department . . . [at times] closes [a restaurant] for serious and persistent violations." (NYCDH)

It appears the basis for briefly closing WILD was consecutive February and April 2013 inspections scored well into "C" territory. According to the inspection report some of the April violations were:

"Evidence of mice or live mice present in facility's food and/or non-food areas . . . Outer garment soiled with possible contaminant . . . Harborage or conditions conducive to attracting vermin to the premises and/or allowing vermin to exist."

Why did the author fail to disclose the recent closure of WILD? Descriptions of a variety of early mistakes she made in business are fully discussed. Why not this?

To verify facts, NYJB communicated with New York City’s Department of Health regarding the information about WILD on its website. An email from Its Deputy Press Secretary included the following:

“According to the Health Department’s copies of the decisions for this establishment . . . [t]he closing inspection . . . resulted in 65 points, including foods out of temperature, excessive vermin activity throughout the facility and bare hand contact. After a hearing, the Judge dismissed enough charges to reduce the points to 45; however, the operator admitted to the vermin and bare hand contact charges. Cold food temperature violations were dismissed.”

Noting that everyone, regardless of experience, sometimes errs and disclosing the brief closure of her restaurant as well as how she was able to see it was swiftly reopened would have been instructive for Ms. Agrawal’s audience of young entrepreneurs. To be this forthcoming would have been truly cool shit as well as interesting. How did she pull this off?

Read Do Cool Sh*t? Sure if you love or can get past the title and can separate the sound advice from the offensive morass.The book is not totally devoid of sound advice and writing that some will find, yes, grating, but some refreshing. Yugos I'm sure had their virtues.

Still, any entrepreneur will be better served by the 2012 masterwork, The Founder's Dilemmas: Anticipating and Avoiding the Pitfalls That Can Sink a Startup, a highly readable, extensively researched, and truly insightful volume.

Consciously or not Miki Agrawal sought to write a contemporary How to Win Friends and Influence People.

Do Cool Sh*t is not that book.