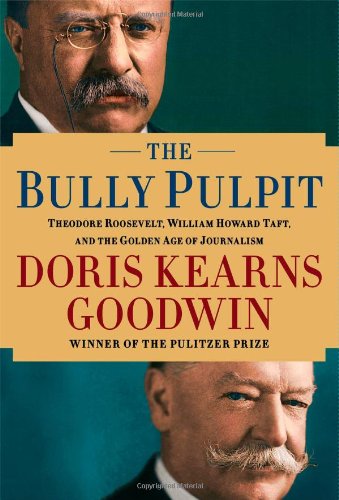 “. . . the book crosses the line from biography to advocacy for a tight embrace between the oval office and the press.”

Doris Kearns Goodwin is an American writing treasure. She resolutely writes big books in an era of diminishing attention spans and commands the attention of policymakers and regular folks alike.

Her past books have explored in copious detail the unique relationship between Franklin and Eleanor Roosevelt as well as angles such as the humility Abraham Lincoln displayed by choosing his cabinet from the men who had opposed him in his presidential bid. Now comes her biceps-strengthening The Bully Pulpit, a dual-biography of the dynamic Theodore Roosevelt and his ectomorphic friend and presidential successor, William Howard Taft.

The theme of the book is the relationship between Roosevelt and a band of investigative reporters whom he dubbed muckrakers: Lincoln Steffens, Jacob Riis, Ida Tarbell, William Allen White, and their indefatigable if somewhat manic editor, S. S. McClure.

The earliest years of the 20th century were marked by trusts—the beef trust, the sugar trust, the railroad trust, and every other trust except for In God We Trust. The trusts, run by business barons like John D. Rockefeller, conspired to squeeze out the little guy, set prices, buy and sell legislators in state houses and in Washington, and generally have their way with the economy.

McClure and his intrepid band went undercover in Chicago stockyards and migrant worker communities in California. They sifted through vast reams of documents as did Goodwin herself, and created multipart articles on the trusts and their pernicious influence in government, the economy, and society. These articles made McClure’s the pre-eminent magazine of the day and required reading at 1600 Pennsylvania Avenue.

The most compelling parts of the book are those in which the activities of the muckrakers and the gutsy young president Roosevelt interconnect. The book slows to a crawl when we turn from those action figures of politics and letters and focus instead on the portly and somewhat antisocial Taft, who would’ve been much happier had he stayed a judge his whole career instead of moving into politics.

Taft isn’t a Hamlet-like character unsure of where his future lies. Instead, he’s simply miscast as governor of the Philippines, as a politician in general, and ultimately as president of the United States. You almost feel bad for the guy. You could call his story The Man Who Would Rather Not Be President.

The book also takes on weight when it goes a little more deeply than the politically inclined reader might desire into the lives of the spouses of the main subjects. These women are not exactly Jackie Kennedy or Michelle Obama. They don’t stand out in any way from other women of the period. And yet they are given lengthy biographical treatment as if they were either compelling in their own right or the real power in a power couple.

So if you can take out Taft and the first ladies, you could slim the book down by a good 100 to 150 pages. Readers will be forgiven if they do the same thing on their own.

The real subtext of the book seems to be a celebration of the unshakable bonds between Teddy Roosevelt and the news media. One of the reporters from McClure’s actually sends the president a draft of an article on one of the trusts for his pre-publication review.

Roosevelt not only provides comments but also sends the reporter part of an upcoming presidential address on the same subject, looking for the reporter’s input. There is a wistfulness in the writing when it comes to this joined-at-the-hip nature of politics and journalists. You almost get the sense that Kearns has written the book as a justification for the news media’s fawning over the Obamas a century later.

Go ahead, Kearns seems to be telling reporters, not that they needed much justification. Work hand in glove with the president. Business was bad a century ago, and it’s just as bad or worse today. Research thoroughly, condemn loudly, and gather ’round the president intimately as he takes his afternoon shave. So it was during Teddy Roosevelt’s time in office; so should it be today.

It’s dangerous to seek to detect the motives of an author for writing a book. In this case, however, it’s hard to believe that Kearns wasn’t writing about the past relationship between reporters and a president in order to justify that same relationship today. The irony is that the reporters back then were engaged in trust-busting; today, by embracing the president all too closely, the media shatters the trust it once enjoyed with the American people.

For Teddy Roosevelt, the term “bully” didn’t mean a mean kid who picked on weaker kids. It was an all-purpose adjective he applied to anything he liked. So the presidency, to his mind, was a bully, or terrific, pulpit—in short, a wonderful place from which to sermonize to the nation.

Kearns enjoys quite the bully pulpit as well, having won the Pulitzer Prize for her past works, which illuminate extraordinary relationships that changed the course of American history. Here the book crosses the line from biography to advocacy for a tight embrace between the oval office and the press. But there’s nothing very bully about that.