Tolstoy and the Purple Chair: My Year of Magical Reading 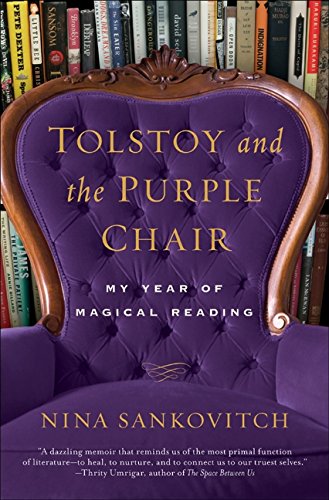 “Simply put, a book that lingers, chapter after chapter, on the merits of other works, novels, shorts stories, memoirs and nonfiction, must itself be able to withstand comparisons to these very works that it so compliments. Tolstoy and the Purple Chair does not.”

A friend—let us call him Dave—once auditioned for the Jeopardy! game show. When, after a few anxious days, he got the call that told him he would not be appearing on the show, he said, “It’s because of what I told them I did as a hobby. I told the producers, ‘I read.’ I could tell right there that it was a mistake. They wanted me to say that I rode horses bareback and that I shot U.F.Os down while riding. They didn’t want me to say that I read. Nobody wants to hear that you read. It is not considered a healthy thing for a person to do after they have graduated college.”

There is, no doubt, a lesson to be learned in this. That something as sedentary as reading does not good television make.

That is the question that Nina Sankovitch, book reviewer for Huffington Post and author/creator of the ReadAllDay.org blog has raised with the publication of Tolstoy and the Purple Chair: My Year of Magical Reading.

In it, Sankovitch attempts to meld the present popularity of what may be called “Ladies’ Memoirs” (tales of marriage, divorce, madness, mean mothers, abandonment, self discovery, heavy breathing, heavier dining, and house restoration—usually set in colorful, sun-drenched places or in upscale environments) with a Please Don’t Eat the Daisies tone that echoes days gone by (cutting down Christmas trees and the like), back when everyone who was anyone (Lucy Ricardo and Samantha Stevens included) lived in the suburbs of New York City, just a train ride out.

In other words: Eat. Pray. Read.

Which is, perhaps, more to the point, because The Purple Chair seems to have been conceived as a blend of Julie and Julia (in which an unknown writer—the now quite well-known Julie Powell—achieved popularity, a New York Times article about her struggles and book deal, all by cooking her way through Julia Child’s Mastering the Art of French Cooking one recipe at a time via the internet blog the Julie/Julia Project) and A Year of Magical Thinking, in which author Joan Didion unflinchingly explored the experience of grief after the sudden and traumatizing death of her husband, novelist John Gregory Dunne.

Is it too soon to wonder what the fate of our purple chair will be, or to begin casting? After all, in completing her task of reading and reviewing a book a day (self challenges seem to be popular topics for blogs), Ms. Sankovitch has already created and sustained her blog and seen it grow in popularity, gotten her Times feature and her book deal. Surely, surely more will follow.

Most troubling for this reader was Ms. Sankovitch’s cribbing of the words “year” and “of” and “magical” from Didion’s title and placing them into her own, as if to draw parallels between the two works.

Indeed, both contain the death of a beloved person—Didion’s husband, Ms. Sankovitch’s sister Anne-Marie, whose death helps propel the author away from the book-a-day as concept and actually make it into a reality. And both walk the path of recovery (Didion by staring into the abyss and writing about it, Ms. Sankovitch by reading stacks of books chosen from the library, often by title alone, to incite memories to counter sorrow) from grief, if such a thing is ever truly possible.

But where Didion handles her material masterfully, with eyes unblinking and head unbowed, Ms. Sankovitch nods and bobs hers, pads her tale with mawkish memories of childhood, and fills page after page with tears, leaving much of the book a soggy mess.

In the same way, the material about the family, about the house full of life, full of children and full of (no matter how tryingly) love, and of holidays and school activities and sick children with their heads flush, eyes big as black velvet paintings and vomit pales on the floor below the bed, would have, in the hands of Shirley Jackson or Betty MacDonald, been vibrant with humor and pathos and humanity.

Instead, in Ms. Sankovitch’s hands it all seems to reflect life at its most mundane, a high school pageant of family life. Although she warmly mentions both Jackson and MacDonald as favored authors, she does not share their talent for putting words on the page.

Which leave us with the task at hand—sitting in the old purple chair and reading a book a day and reviewing it: the Julie and Julia of it all.

Here Ms. Sankovitch meets with more success. Obviously she loves her books every bit as much as Julie Powell likes a good Boeuf Bourguignon. And after the first chapters establishing and explaining her family history and structure, Ms. Sankovitch settles back into the purple chair to read and to relay, in succeeding chapters, both the power and the appeal of books.

And she will no doubt win many fans with what amounts to a series of essays on books and love, war, death, hope, sex and marriage. And certainly her final chapter—that in which Tolstoy finally appears, will find itself much cherished in the hearts of those for whom this book would most certainly appear on the list of those to read, should they ever take a year out in order to themselves read a book a day.

For this reader, the best moment happens early on, when Nina Sankovitch presents her best and clearest insight:

“I was in my forties, reading in my purple chair. My father was in his eighties, and my sister was in the ocean, her ashes scattered there by all of us in swimsuits under a blue sky. And only now am I grasping the importance of looking backward. Of remembrance. My father finally wrote out his memories for a reason. I took on a year of reading books for a reason. Because words are witness to life: they record what has happened, and they make it all real. Words create the stories that become history and become unforgettable. Even fiction portrays truth: good fiction is truth. Stories about lives remembered bring us backward while allowing us to move forward.”

Simply put, a book that lingers, chapter after chapter, on the merits of other works, novels, shorts stories, memoirs and nonfiction, must itself be able to withstand comparisons to these very works that it so compliments. Tolstoy and the Purple Chair does not.

Often, in the reading of it, the author pulls up the name of some other work, from Watership Down to Nick Hornsby’s Housekeeping vs. The Dirt (from which Ms. Sankovitch extracts an excellent quote, “Read anything, as long as you can’t wait to pick it up again.”), only to have the reader think, “Now that’s a great book,” and look to his bookcase longingly.