Object Lessons: The Paris Review Presents the Art of the Short Story 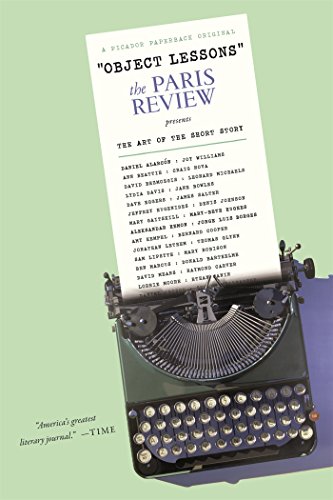 “Some books are great, and this is one of them.”

There’s a popular T-shirt just now sporting the meme “Great story, Bro. Tell it again.” It’s a snarky, preemptive retort to those conjoined contemporary menaces: self-absorption and overshare. We’ve all stood next to that guy with the interminable account, gritting our teeth as we wait for the laggard coda. The shirt’s a bestseller because people know just what it means.

Yet taken at face value the sentiment is joyous. What could be better than hearing a story so wonderful, so transporting and affecting, that you wish immediately to hear it again? I like to imagine the editors and writers who put together Object Lessons all wearing these T-shirts at some subtly decadent publication party—and wearing them earnestly.

Irony and sarcasm are wily pugilists. They duck and run, they rope-a-dope. It’s a rare blow from sincerity that floors them. But the twice-told tales here punch with such power as to lay them whining on the canvas.

Give George Plimpton, Philip Gourevitch, Brigid Hughes, and Lorin Stein the championship belt. These Paris Review editors, past and present, have nourished an enterprise so vital that even an intramural match—such as this one, where all 37 writers are in the club—scans like Varsity.

Some books are great, and this is one of them.

The repurposing of “content” is the commercial imperative of our time, from Barnes & Noble’s six-buck Dickens to pop-up bubbles garnishing old movies. The Paris Review’s creative take on this was to ask some of its many friends among contemporary writers to mine its archives, each choosing a story that moved or influenced them.

In the event the choosers disinterred names both canonical (can you say Borges?) and relatively obscure: for instance, Dallas Weber and Thomas Glynn, not household names, have terrific stories presented here by Joy Williams and Jonathan Lethem.

There are 20 stories altogether, with 20 often very different types of intros—and there’s great a-ha-style fun to be had in seeing the match-ups.

Anyone following the last decade’s internecine debate about the future of fiction could guess that experimental fiction proponent Ben Marcus had a thing for Donald Barthelme, whose story (“Several Garlic Tales”) he chooses. Marcus’s introduction is excellent for his examination of Barthelme’s methods alone. Author, teacher, and entrepreneur Dave Eggers uses James Salter’s story “Bangkok” to give a short (and specific) seminar on dialogue, full of elucidations which the story bears out beautifully.

Of course, David Means admires Raymond Carver—but here he tells you exactly why and compares Carver with Picasso!

And the degrees of separation further evanesce. One suspects Lydia Davis of being an admirer of Jane Bowles (“Emmy Moore’s Journal”), but our pleasure is multiplied when Ali Davis then chooses a Lydia Davis work, “Ten Stories from Flaubert.” And why not Sam Lipsyte with Mary Robison? I can almost see their names carved together in a tree. (Sam Loves Mary!)

There’s Mary Gaitskill on Mary-Beth Hughes (not for the queasy, btw) and Norman Rush on the pleasures of Guy Davenport’s singular fictions, an intro that increases the latter by orders of magnitude. Indeed the editors might have justly called the collection A Multiplication of Pleasures.

Distinctly gratifying also is the opportunity to meet these contemporary voices—the choosers—in this unaccustomed role, as advocates and devotees rather than as the main subjects under consideration. It is on this solid ground that you say in your head to Wells Tower: “Oh, I didn’t know you liked Evan Connell so much. Me, too!”

And suddenly Mr. Tower, whose ubiquitously considered collection, Everything Ravaged, Everything Burned—which won him thoughtless comparisons with Faulkner and sotto voce votes for most hyperbolic title—becomes again what he doubtless started as and will always remain: a great reader. A reader wonderfully capable of apprehending and lionizing the crushingly quiet accomplishment of Connell’s tender short story “The Beau Monde of Mrs. Bridge.”

Yet another pleasure is how Mr. Tower’s selection permits charmed and lucky readers to gaze into the petri dish holding a germ that would grow into those peerless portraits of midwestern, mid-century stasis and ill-starred rectitude: the novels Mr. Bridge and Mrs. Bridge, and the affecting film that followed.

Full disclosure: I used to briefly haunt the Paris Review offices during the mid-1990s, drawing an assignment from George himself to see what sorts of literary escapades might be authored on this latest new thing, the Internet. (Hey, we had to hurry, there were rumored to be 15 million people already on it!) Part of my job was to rummage through the archives looking for items to post on the new website—it was like being a zoologist on safari.

Day after day I’d make my way downtown to Soho from the repository of literary legend housed in Plimpton’s East Side townhouse. With me, a satchel full of old issues, cassette tapes of interviews, photocopies of articles about the Paris Review crowd (Esquire, Gay Talese), and endless photos of smoky parties where you could almost make out Bill Styron talking to Mario Puzo—with maybe Lee Radziwill casting a supercilious glance from the corner. I often missed my subway stop, nose buried in old ink and pictures.

To inaugurate the site we posted audio files with the voices of Cseslaw Milosz and Chinua Achebe (he sounded like the Lion King’s father), poems by Merwin and Hall, I think, and interview excerpts from the unlikely duo of Richard Price and E. M. Forster.

All this by way of saying that among such great riches, it was hard to choose. You can’t include everything, and yet very winnow seemed a sin of omission, exclusion.

Object Lessons, happily, gets it just right. Its choosers wisely chosen, the collection echoes meaningfully through an important history while being at once precisely of the present. It’s particularly nice (and neat) that Borges’s famous “Funes the Memorious” is here, because for all the metaphysical turmoil that character’s prodigious memory causes, the volume he now appears in proves that memory, at least as put to work preserving and cultivating literary landmarks, is sacred and necessary.

Object Lessons is full of stories worth telling over and over—just like the T-shirt says.