The House of the Pain of Others: Chronicle of a Small Genocide 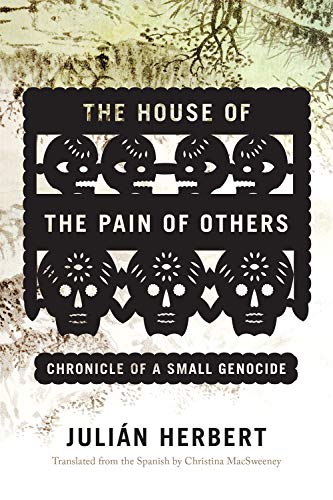 Julian Herbert’s The House of the Pain of Others is a lot of things at once: a diatribe against xenophobia and Sinophobia in Mexico; an examination of the “idiocy of power;” a chronicle of the city of Torreon in the state of Coahuila; and an extended personal essay about the author’s search for meaning in the 1911 massacre of some 300 Chinese immigrants by Mexican revolutionaries. Sprinkled in are sharp remarks against those who disagree with the state’s monopoly on violence or those who focus on the negatives of mass migration.

The book’s center—the aforementioned massacre—is not discussed in any great detail until page 157. Before that, The House of the Pain of Others engages in lots of digressions, side comments, and biographical sketches of the major participants in the massacre. Herbert’s point in this often meandering work is that although we like to think that, “the person who has power has the truth,” the truth is that political violence, which was endemic in the 20th century and still with us in the 21st, is preceded by popular rhetoric, whether based in truth or concocted from pure fiction.

In the case of the massacre at Torreon, the mostly male and almost exclusively Cantonese immigrants were singled out for murder and mutilation because of a multiplicity of factors. Economic resentment was chief among them, with the impoverished residents of La Laguna seeing Chinese wealth as an affront to Mexican pride.

The boredom of the pro-Madero soldiers was also a main reason, as the invaders of Torreon amused themselves by beating, robbing, and eventually executing Chinese workers during their two-day siege of the city. Finally, and maybe most importantly, the massacre has some connection to anti-Chinese sentiment in North America dating to before the arrival of the first Chinese immigrants in California in 1848. Herbert says that these ideas moved from Anglo-Saxon America to Mexico and were amplified during the regime of Porfirio Diaz. Diaz and his Cientifico intellectuals wanted to improve Mexico by “improving the race,” i.e. brining in thousands of European immigrants. When this did not materialize, the Cantonese were approached.

The House of the Pain of Others can be difficult to follow at times. A slew of names are bandied about, and often Herbert jumps from topic to topic with nary a trance of narrative cohesion. This book does not market itself as a standard history, but at times its creative nonfiction borders on being asinine.

Narrative defects aside, The House of the Pain of Others tells an excellent story about an event that Mexico and Torreon have done a good job of forgetting. Those who remember it remember it wrongly, as Pancho Villa had nothing to do with the murders, the Chinese did not fire on the insurgent soldiers first, and those guilty of the crimes were not just the poor and downtrodden looking to get even. The book is an exploration of how racial resentment can simmer for a long time before breaking out into open bloodletting.

A less universal reading would also suggest that this book uses one example to show how post-1821 Mexico has been stuck in an ouroboros of ideals and revolutions giving way to corruption and violence before inspiring new and soon-to-be corrupt and violent revolutionary ideas. The “other” (a term used a lot in this book) therefore becomes a scapegoat for cultural failures.