Henry, Himself: A Novel 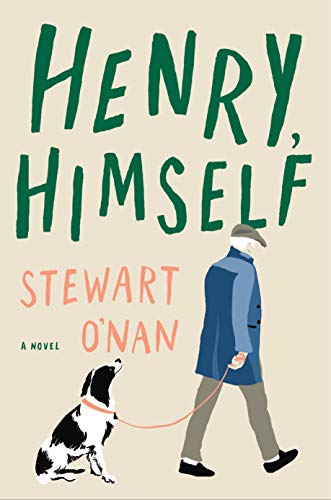 Henry Maxwell, the main character in Stewart O’Nan’s latest novel, Henry Himself, is an expert moderator at fraught family dinners. He’s the stalwart at the table slicing through household tension with the nonchalance of one apportioning a log of premade cranberry sauce with a butter knife.

Not that it doesn’t cost him. At 74, he’s given to fainting spells and chest pains. His wife, Emily, the main protagonist in O’Nan’s 2011 novel, Emily, Alone, is a piece of work. She’s surly and sharp-tongued; a tough person to love, or even to spend an afternoon with, but Henry is as constant as the Captain in Longfellow’s poem The Wreck of the Hesperus. Like the daughter in the poem, Henry is a doomed man lashed to the mast.

It takes a deft hand to do justice to the ordinary, as Maureen Corrigan said in her Fresh Air review of Emily, Alone. Any homeowner who grapples with dogs peeing on carpets and critters who creep into attics will relate to Henry’s daily household chores, but does one really want to spend 300+ pages wrestling with the same dilemmas that hound us in real life?

On the other hand, the real joy in this novel is the seemingly endless moments that felt like they could have been plucked out of a regular life.

Ordinariness is a privilege and the relative stability of Henry’s life in Pittsburgh and his membership at “the club,” attest to the fact that this is a novel about a certain set of folks who have not been challenged by race, class, or economics. Sure, Henry and Emily economize and balk at the thought of paying $700 for a new set of tires, but they have the money to pay for those things without worrying about eviction. Yes, Emily comes from humble means, but she’s learned how to navigate the suburbs, even fretting when her Christmas cards don’t go out on time.

Henry, a retired engineer, is a frugal man, not an impoverished or marginalized one, and that’s a key point here, one that will probably leave some readers exasperated. Politics and entitlement are not the overt subject of this novel, but one can imagine Henry or especially Emily extolling the less fortunate to “Pull up your bootstraps,” when of course, they’ve never had to do it, except as white, native-speakers, and that’s a big exception.

Domestic novels often focus on class and even hold up middle-class life as an ideal. But how does one transform the domestic into plot? If this novel had been written by a woman would there have been a different response? Would we be calling the details about the dog and the Christmas cards “boring” or “mundane?” Is there a certain fascination at play here because O’Nan is a man and it’s hard to fathom a man so enamored with household drudgery? Has O’Nan been treated with more deference than a woman who tried to write in great detail about the sale of the neighbor’s house?

“The Brabenders’ was for sale. He noticed the Re/Max sign while he was taking Rufus for his morning walk. The windows were dark and there was a lockbox on the doorknob. It was a shame, Henry had always liked them.”

Domestic fiction has largely centered on women, and kudos to O’Nan for stepping into the fray, but there were moments when one might long for more self-actualization from Henry. The excessive, cloying civility and attention to detail—ironed napkins and tablecloth—can be maddening when one is longing for real connection.

As this novel about Henry and Emily’s life progresses, Henry loses ground. Time is running out for him. Memories of his childhood and war years clue in the reader to Henry’s fraught past, and why he might cherish the routine of home life, but never fully explain why he’s so flattened by the landscape.

This novel is a portrait of daily life one can imagine including in a time capsule and launching into space, assuring that a certain generation is preserved into perpetuity. Just don’t read this book with the expectation that anything will happen except for the everyday struggle, which, if you are lucky, you are attending to right now.