The Bricks that Built the Houses 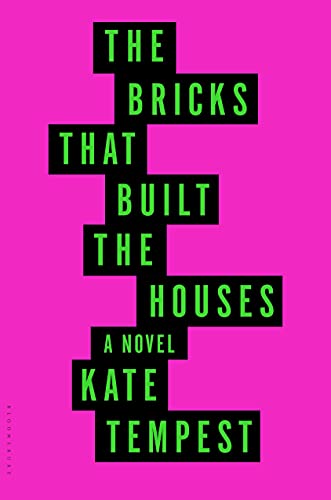 Kate Tempest was born to work with words. In The Bricks that Built the Houses, her debut novel, they are her building blocks, and she shapes, creates, and connects language in a unique and vivid way, both playful and arresting.

The Bricks that Built the Houses is the story of the interlinked lives of four young Londoners—Harry, Becky, Pete, and Leon—and their various struggles as they negotiate love, sex, jobs, and family in their twenties. The novel is loosely based around the same stories and characters that were depicted in Tempest’s 2014 debut album, Everybody Down, and her epic spoken word piece, Brand New Ancients. It’s really a mystery why she has revisited this material, as the characters and story are the weakest aspects of the writing, coming second to her talent for description and dialogue.

This book’s background and inspiration is South London, where she grew up and still lives. Her characters are post-recession millennials, unsure of their direction in life and often bruised by bad familial and romantic relationships. As in her poetry and music, she documents mid-twenties life well, an authentic voice describing the parties, pubs, one night stands, first loves, rollies, raves, deadend jobs, and disappointments familiar to so many. While universal, these characters and their situations are also particular to London, and the energy and drama of the city buzzes through them. Professional yet lowkey drug dealer Harry cuts through her patch of posh offices and hipster parties on a Friday night:

“She moves in confident strides. Feet fast, she takes long steps. She is all London: cocksure, alert to danger, charming, and its flows through her.”

In spite of their dissatisfactions and disappointments, or perhaps directly because of them, Tempest’ young characters live life for the moment, grabbing their moments of weekend release and joy. Depressed, aimless Pete wakes up from a heavy night to realize that he’s pulled:

“Pete’s suffering. His head is pounding. Brain shrivelled, dried out, jaw aching from the pills, and it pounds in his cheekbones and his stomach is grease-foul, recalling last night, retching up nothing. But no matter how rough he feels, everything’s fine because she gave him her number.”

He has met Becky, and their doomed relationship will become one of the key threads of the story. Becky has had a difficult relationship with her mother, and her father is an imprisoned radical political activist who may or may not have been set up over sexual crimes. Tempest describes her attitude to relationships thus:

“If something is exciting, she lets it be exciting. But the minute people get too keen, she cuts them off. She can’t handle any more than casual things. It gets too painful. You give too much, they take too much, they want too much, or not enough, and suddenly you find yourselves emptied out and open-handed, grabbing for some more.”

There is a straining throughout the book to add a political aspect to the characters and their lives. It is obvious that Tempest is critical of austerity and cuts and suspicious of the successive neoliberal governments that have led England into its current malaise; however, these points are always made awkwardly through bald statements rather than through the story. Structural inequalities are mentioned in passing rather than being demonstrated through her characters, who tumble into trouble rather than being trapped by it.

Tempest’s political naivete shows particularly in her descriptions of Becky’s father John Darke, a political activist with seemingly Russell Brand-esque appeal, touring around the country preaching revolution and attracting female admirers. He espoused “people power” and “collectives,” apparently dazzling the people enough to concern the authorities, but beyond that we are given no more detail about his politics. Was he a unionist, Marxist, inspired by Guevara or Gramsci? Considering that he features so highly in the book and his ideas are apparently so radical and influential, it’s telling that we do not know. We are, however, told that:

“It became fashionable to hate John Darke. Damning him meant you absolved yourself.”

Or had opposing political beliefs? There is just a little too many of these clunky and simplistic sweeping statements throughout the narrative for this reviewer’s taste.

Mostly, the prose sings. There is, however, endless description and backstories. The first half of the novel is spent giving the backstory of each main character, including extensive biographies of their parents and grandparents. It is executed nicely enough, but is entirely unnecessary. As are long screeds where she describes the interior of a café, or a pub:

“Plates and forks and bread and ketchup. Endless tea-stained wash pots. Becky’s spatula moves expertly over the griddled strips of swine. She pours the coffee, thick fuel steaming in white china, and moves, assured as always, to his table. This morning she’d had the two builders who barked orders, ignored her and didn’t say thank you. Then there was that couple that came in arguing. Shovelled eggs in a cloud of stress and fury and left in heavy silence. At least the men she massages look her in the eye. This man shut the door behind him. And he waited patiently for her to get back round the corner before ordering.”

“Back then, the best people she knew were full of love. Gooey eyed on acid, playing with their fingers, giggling like toddlers at the shape of household objects. But now those same kids are grown ups, parents with kids of their own, supervising the moving of boxes around factories, or getting chubby in travel agents, answering phones and hunting for deals, biting into cheese and meatball melts every lunchtime and taking two sugars with every weak tea. What makes what I do any different to what they do?”

Tempest’s gift for language does however frequently turn the ordinary into the extraordinary, her depth of feeling for city life, for her friends and neighbors, pouring into her prose and creating magic. As with her character Leon, she understands that even the mundane is special and not to be taken for granted:

“‘All life is,’ they would say, elegant poets after enough lines, dabs, swigs ‘is routine and bullshit. Nothing ever changes. Work, eat, sleep, fuck, drink, dance, die.’

“But Leon had never seen life that way. Leon saw that life could be hideous or beautiful, often both, but never mediocre. He knew that every little thing that happened had to considered, felt, enjoyed, either fought with or fought for.”