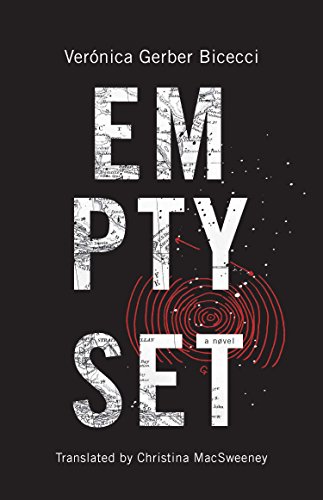 Veronica Gerber Bicecci’s debut novel, second book and her first translated into English, Empty Set (Conjunto vacío), has multiple dualities—the verbal and the visual, the analytic and the emotional, autobiography and fiction—that aspire to convey ineffable sums greater than their constituent parts.

Gerber Bicecci’s bio describes her as a visual artist who writes. The text of her novel is accompanied by conceptual line drawings described by other critics as Thurberesque though lacking Thurber’s humor, some of which are calligraphic, others dendrochronological, but most are geometric Venn diagrams.

Names in the text are followed by initials in parentheses that also appear in the drawings on geometric shapes corresponding to particular characters. The text and accompanying drawings are presented in one- to four-page chapters/sections that read like poems (with lots of negative space) or linked short stories.

Gerber Bicecci takes a scientific, analytical approach to organize emotional events and states. In an interview in The Rumpus she says “for me the risk was to make readers to be moved by a ‘math’ diagram.” In the novel her namesake narrator relates, “It’s in the boundaries that everything becomes invisible. There are things, I’m sure, that can’t be told in words. There are things that only occur between the white and the black, and very few people can see them.”

As for the events related in Gerber Bicecci’s novel, in the same interview she says, “I would lie if I say it is all autobiography, but I’ll be lying too if I say that everything is fiction. It is amphibian.” That places her in the company of other writers of meta-fiction, such as Ben Lerner (whose novels 10:04 and Leaving the Atocha Station are also reviewed at NYJB).

Like the author the novel’s first-person narrator Veronica is the Mexican daughter of Argentinian political exiles. The central event that predates the 2003 non-linear narrative occurs in 1976 when Veronica is an adolescent: her mother decides to return to Argentina, despite her own parents’ plea that she stay in Mexico, after which she disappears, or more likely, was disappeared. “I’ve probably never been so alone as when Mom (M) disappeared. There was no time to stop and think about it.”

And yet loneliness is identified in hindsight. The paragraph from which the preceding quote is found begins:

“We always realize things afterwards. Loneliness, for example. It’s not when we think we’re alone, or when we feel abandoned. That’s something different. Loneliness is invisible, we go through it unconsciously, without knowing. At least that’s the sort I’m talking about. It’s a kind of empty set that installs itself in the body, in language, and makes us unintelligible. It appears unexpectedly when we look back, there in a moment we hadn’t noticed before.”

The loss and abandonment Veronica felt when her mother disappeared is echoed in her adult life when her boyfriend Tordo (T) leaves her for another woman. But a test case or control sample presents itself when Veronica takes a job organizing and packing the belongings of Marisa (Mx), a deceased writer and Argentinian exile whose own adult children either lack the time or want to avoid the task’s associated emotional pain. Among Marisa’s belongings Veronica finds correspondence from someone identified only by the letter S, the final item of which is a 1977 telegram in which S affirms,

That’s probably just the sort of artifact from their mother’s private life her children do not want to see. Veronica finds it “spine chilling.” Veronica’s contact person on the job is Marisa’s son Alonso(A) with whom she becomes romantically involved.

Veronica and her brother refer to their childhood home in Mexico City as “the bunker.” On a visit to Argentina she observes,

“Grandma (G)’s house is suspended in time. It’s also stuck in the moment my grandparents last saw Mom (M). The house in Ipona and the bunker: a pair of found mirrors. The reflection becomes infinite. And the infinite is an eternally empty set.”

Empty Set invites its readers to both approach its imagery empathically and simultaneously view it with critical perspective. Fans of elliptical experimental fiction will welcome the challenge. An afterward by translator Christina MacSweeney (with drawings by the author) explains some of the challenges posed by Gerber Bicecci’s Spanish and MacSweeney’s choices, such as dropped pronouns.